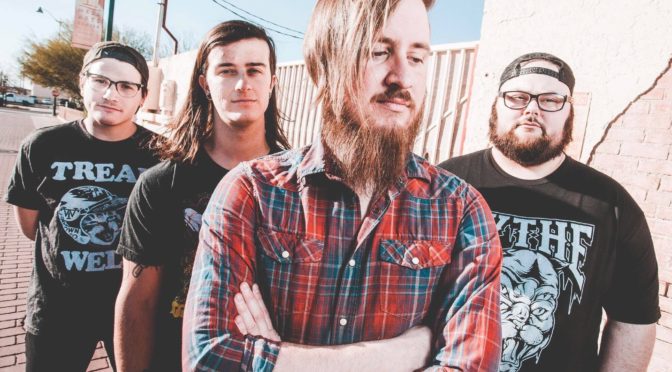 Phoenix-based hardcore punk-infused metal band American Standards is known for their “piss and vinegar” sound, boasting a well-crafted amalgamation of heavy-handed, technical instrumentals, and brutal yet poetic lyrics that confront societal divides such as corporate greed, media corruption, loss, materialism and personal struggle. Presumably due to their focus on DIY ethics, the group attracted a devoted following in response to their leadership of what has come to be known as the “guerrilla punk” movement in Phoenix. Think of the gritty, raw basement shows we all know and love, except this time American Standards would be there to distribute self-produced compilation CDs as a method of raising money for local causes and charities. Pretty rad, isn’t it?

Online you’ll find American Standards listed as “chaos-driven noise punk” also noting themselves as self-proclaimed “purveyors of fine noise” and “Voted Least Likely to Succeed in 2011″ – the year the band was formed. Don’t let their humor fool you though, the message packaged within the chaos tells something of a deeper story. The group has since been recognized in the form of a regular presence on local radio stations like 98KUPD, RadioPhoenix and TheBlaze in addition to sharing the stage with acts like Atreyu, Comeback Kid, Norma Jean, Every Time I Die and many more.

American Standards’ most recent album “ANTI-MELODY” (which premiered in Revolver Magazine, Alternative Press and Lambgoat) is the group’s fourth release, delving into topics that are undeniably more personal than ever before for its members while simultaneously continuing to deliver on what the band has always been known for: pungent commentary on societal divides and anti-consumerism. This time around however, the development of this album is a distinct reflection of American Standard’s ability to focus through times of struggle while baring it all despite battles with depression after the loss of founding guitarist Cody Conrad to suicide, followed shortly after by the loss of the vocalist Brandon Kellum’s father to cancer.

What would have broken so many other bands transmuted into a powerful point of resonance for American Standards, empowering them to produce an album that not only cuts deep, but holds true to the spirit of the band’s fiercely integral essence.

“Writer’s Block Party” might at first sound like pandemonium to an unfocused ear, but with closer listen you’ll quickly discover a lyrical contrast that highlights societal pressures imposed on those who desire success or any place in the limelight. The song immediately portrays the immense impact of these pressures through the band’s eyes; “dancing around like we’re marionettes, a stutter in our step, a cadence in our breath, to the unimpressed…”

This is an opening number that comes out swinging, keeping things hyped while immediately addressing the lyrical heart of the matter which made it an ideal choice for a single. And despite seeking an “easy fix” it’s clear things weren’t so simple as the song goes on to say, “I gave up my heart to find a soul… The clouds came in and the lights went out. We were guided by the roar.”

The metaphorical nature of their lyric choices leave much to interpretation and making space for further connection with their ever-growing fan base, but it can be speculated that this track alludes to the many struggles of avoiding corporate sponsorship in the music industry and beyond. This line in particular encapsulates the track well:

“Remove the spine and the heart. Safe bet, mindset. And claim what’s left as art.”

Although brief in content, the technical aspect of  instrumentals included in “Carpe Diem, Tomorrow” are placed well as both a striking opener and stout interludes that highlight a wake-up call just beneath the surface:

Encouraging fans to seize the day, this track utilizes the concept of time to motivate listeners and warn them of the consequences of stagnancy in life. Audibly this track has an underlying rhythm that is a bit similar to that of System of A Down, Throw Down, or Tool; while offering unique lead guitar, which in contrast offers similarities to bands like From First to Last, Trivium, and Hatebreed.

“Church Burner” starts off with an eerie chorus which repeats throughout, but not before laying down some seriously chunky guitar riffs that bring a daunting undertone. The lead guitar and bass notes are undeniably the highlight here, although this is the first sing-scream track to be found on ANTI-MELODY which is to be noted as well.

Lyrically this track is beautiful in the simplicity of its resounding metaphor while still managing to communicate the intensified angst that American Standards fans long for.

“An extremist in boldface type. We’re all people, but compassion doesn’t sell. And there’s no time for independent thought. There are no divisions outside the ones that we create.”

While chaos and hardcore don’t exactly scream “empowerment”, American Standards is clever in the execution of their message. They scatter calls to action throughout each song and foreshadowing for what is to come if the previously mentioned social obstacles aren’t addressed in a way that keeps things moving, so-to-speak. The lyrics go on to say:

“Tear down the walls and build a bridge… We don’t want another title to tell us who we are.”

“Bartenders Without Wings” slows things down a bit, sounding more like a classic punk ballad that explores a struggle between man and self. The energy of this track is especially solemn, suggesting the song may be addressing the unexpected loss of founding guitarist Cody Conrad as well as Kellum’s father. “Bartenders Without Wings” also spotlights some inarguable similarities to the sound of now infamous As I Lay Dying.

According to Kellum, ANTI-MELODY is the result of “what started as social commentary on the growing divide in our society” but then became much more personal due to the loss of Conrad and Kellum’s father amidst recording; this track communicated that effortlessly.

Kellum went on to say that the band “went back in to re-record much of the album and in a lot of ways used it as therapy to cope with the experiences.”

“Danger Music #9” is a smashing reminder of the dreadful state of conglomerate corporate takeover and a return to the classic American Standards sound, fueled by the pain and grief that lurked in the shadows for these four bandmates at the time. It can be inferred from the lyrics that they are not simply addressing a grandiose idea of anti-consumerism, but more specifically an issue with the intentions and treatments of our healthcare system. Though often choosing to communicate through lyrics that are poetic and/or satirical in nature, “Danger Music #9” takes an unprocessed approach to its confrontation of western culture – particularly medicine, making the lyrics that much more savage in nature.

“You make a beautiful statistic, diamond eyes. Giving incentives to move these units. Prescribe more illness. And we’ll become the money they count behind closed doors. A half a million dead. A third of us next.”

The title may have tipped you off as to what this track is about. The tragic loss of Kellum’s father is uttered through every verse of “Cancer Eater”, tearing from word to word with an energy unmatched by any other song on the album. Instrumentally, “Cancer Eater” is equally as brutal, once again highlighting lead and bass guitar.

Lyrically, however, this track has got to be the most poetic:

“We’re taken hostage by the ones we love, that leave us behind. I can’t be as tough as nails, with this paper skin. And organs that fail. But life moves on, and I’ll go on too… I lived like him. I’ll die like him. Remember me, remember.”

“Broken Culture” is self explanatory in its purpose, erupting with energy right from the start with strategically coalesced vocals and a true hardcore sound that are again unique in their likeness to other tracks on the album if you listen close. Themes of anger, fear and isolation resurface once again, but this time with a more somber tone in wake of its preceding track “Cancer Eater”.

“We had more guns than bullets so, we made pistols with our hands. Where’s the good; there’s evil we must fear. So, pull the trigger and pray the rounds land.”

“Chicago Overcoat” takes all the energy from the seven songs before itself and delivers that consolidated energy as one swift punch in the ear drums before ending on a beautiful piano note. The track is in itself, a crescendo of all-encompassing instrumentals accompanied by a dominating vocal performance by Kellum.
“Chicago Overcoat” starts off with the focus on bass and drums as opposed to vocals and lead guitar, making for a pleasantly unrefined, and super-sludgy combo. And yet, there is a tone of desperate release, resentment, and determination to rise above through and through.

ANTI-MELODY took things to the next level for American Standards, allowing fans to get to know the individuals behind these powerful words that leave us feeling a little less misunderstood and a little more at home in the world.

It seems, although incredibly tragic, the struggles that American Standards experienced during the making of ANTI-MELODY created a vacuum of emotion yielding an outcome no fans could have predicted. We’re looking forward to seeing where this intimate breakthrough takes them, and eager to listen in as they continue to evolve.

ANTI-MELODY is available now on iTunes, Google Music, Amazon and Spotify or you can pick it up along with exclusive merchandise through the
American Standards Bandcamp page.