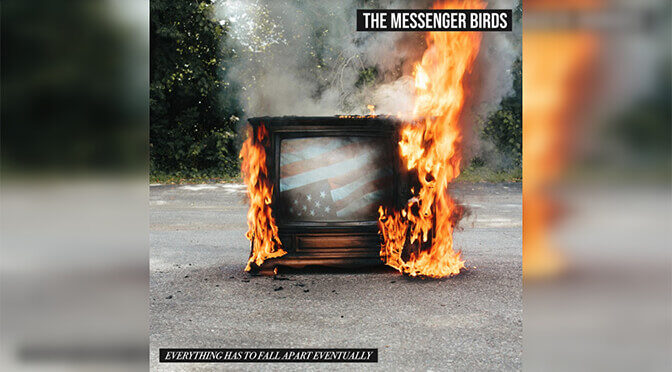 Album To Be Played In Its Entirety Live From Rustbelt Studios at 8pm EST This Friday, October 9 on Band’s Youtube Channel

When approaching any new band, it’s best to avoid assumptions to keep from pigeonholing them as this or that instead of just themselves, Still though, it would be understandable that The Messenger Birds, a Detroit two-piece rock band made up of members Parker Bengry and Chris Williams, whose debut album is being pressed at Jack White’s Third Man Press, might cause people to assume they are a band in the same vein as another great Detroit band: The White Stripes. If that was anyone’s assumption going in, Bengry and Williams quickly dispel it with extreme prejudice just moments into their debut full-length Everything Has to Fall Apart Eventually.

What’s instantly shocking about the album is that it was, according to the band, written in 2018 and recorded mostly in 2019, because the music feels immediate, like the band is bunkered down somewhere, inundated by the relentlessly bleak news of the day, and cranking out these songs to express their frustration and rage. Make no mistake: Everything Has to Fall Apart Eventually is not just a great rock record – it’s an emotional journey.

The opening track, “Play Dead (Just For Tonight)” opens with a somberness of a funeral dirge, with a slow-building guitar, picking up more and more momentum with each note. Lyrically, some connections are made because of what we, the listener, are feeling inside at the moment. But one can’t help but feel the line “Keep your mask up on the nearest shelf,” even if its meaning is about the need to escape into another persona to get away from everything that feels horrible. The further references to “another day for the Holocaust” – a shooting at a synagogue, pipe bombs, and false-flag conspiracies – lay open the song’s ominous tone of fear and paranoia, like it’s anticipating an oncoming apocalypse, complimented by the creeping feeling of dread of the music that eventually explodes into chaos of drums and guitar with the song title repeated as a refrain “Just play dead for tonight,” like needed advice to survive these times.

“Play Dead (For Tonight)” is just an opening salvo. “The Phantom Limb,” which has hit 5 million plays since it debuted on Spotify in 2018, is where the record really kicks into high gear. It’s the kind of fist-pumping, all-out rocker that’s been missing from our recent music landscape. It’s a song that forces you to remind yourself that it’s being played by two guys on two instruments, and is the best that dynamic has produced since The White Stripes. One of the many things that stand out about Everything Has to Fall Apart Eventually is how much Bengry and Williams are able to pull off with each song, reaching sonic landscapes that seem impossible for a two-piece band.

If the release’s ominous, paranoid tone is merely hinted at in the first two tracks, the one-two punch of “What You Want to Hear” and “Self Destruct” releases it like a primal scream. The Messenger Birds clearly didn’t set out to write songs about how we are inundated every day with bleak news brought to us by society’s most heinous monsters – these songs are merely a byproduct of what it’s like living in these times.

Even a cursory glance of a news feed or comment thread sees people desperately clinging to a vision of our society that is far from reality, and “What You Want to Hear” is the ballad of confirmation bias: a song directed at everyone who wants to live in an insular bubble and shut out any challenges to their flawed beliefs. “Self Destruct” is where we’re headed as our country seems to be handed off more and more to hate groups that have been emboldened in the past few years. “My tv’s like a time machine/Takes me back… 1943/Tiki torch, marching up the street/Flying flags of a dead dream” is a lyric that is clearly inspired by the events in Charlottesville just three years ago, but sadly are still too relevant in light of The Proud Boys and other supremacist groups trying to bully and intimidate those who push back against their messages of hate.

The first single and true emotional centerpiece is the title track “Everything Has to Fall Apart Eventually.” As hopelessness seems pervasive and the walls start closing in, we’re too often left with our own thoughts screaming inside our heads. While we all hope for the best, we fear the worst, and the narrator of the song knows this better than anyone. It’s the anthem for fighting back when fighting back feels pointless, and for when loss and tragedy feel too inevitable to resist anymore. As the song closes with the repeated “Hope we make it through,” we can all close our eyes, nod for a moment, and mouth “I hope so, too.”

If the title track is the emotional apex, then the acoustic “When You’ve Had Enough,” gives us a moment to scale it all back for a breather and some introspection before gearing up again. It’s a song that seems perfectly placed at the end of the record that has been an intense rollercoaster of emotion, like the moment when the ride hits a long stretch of gentle hills and you feel for a moment a cool breeze on your face and gain a sense of peace. It’s providing comfort through the reminder that we are not alone in this, even if, like the song intones, “Most days I’m only getting by,” which we all have felt in these past 10 months.

The world we are living in is a constant rollercoaster that never seems to end, and the album closes with “Start Again” to remind us of that. The lyrics reference the Greek myth of Sisyphus (“I feel like Sisyphus just got it started again…”) who angered the gods by putting Death in chains so no one else had to die. As punishment, he is forced to push a heavy boulder up a hill only for it to roll back to the bottom again, forcing him to start again. I’ve always loved the myth of Sisyphus because it is a tale that defines determination, even in the face of that which is unavoidable. French philosopher Albert Camus wrote an essay about Sisyphus’s pursuit of getting the boulder to the top without rolling back down again, even though he knew it would. Camus tells the reader that it is important to picture Sisyphus as happy. If we can picture Sisyphus as happy, then we too can be happy and believe in our collective potential to survive all of this horribleness. Even as the song descends once more into a chaos of screeching guitars and drums, The Messenger Birds seem to want us to do the same.

Everything Has to Fall Apart Eventually is one of the most self-assured debut records I’ve heard in recent memory and one that feels the rafters begin to shake as the foundation of our reality cracks underneath and knows it’s all caving in on us. Even if the lyrics warn us that we are at the forefront of an apocalypse, it implores us to stand together against every wretched monster carrying tiki torches and trying to shout us down with hate. We will fight back and reclaim our world and our sanity and do it together, pushing back those who are only concerned with power.

Let’s hope for that return soon, because with our world being on pause for the moment, live shows won’t be happening for a while. This is a shame because this album is an album that demands – cries out – to be heard live. In the meantime, blast it from your speakers and let it pulsate through your body and reverberate through your soul. The Messenger Birds are a band for this moment and could define a third phase of Detroit born-and-bred rock ‘n’ roll. The Messenger Birds Everything Has to Fall Apart Eventually was released October 7th through Earshot Media. You can order the record, buy some merch, watch videos, and get the latest news on the band on their website.

The Messenger Birds will continue to celebrate the new release with fans as direct support for Steel Panther’s upcoming socially-distanced ‘Fast Cars and Loud Guitars- Live at The Drive-In’ show taking place on October 16 at Pontiac, MI’s Crofoot Festival Grounds. Tickets for the event are now available here.