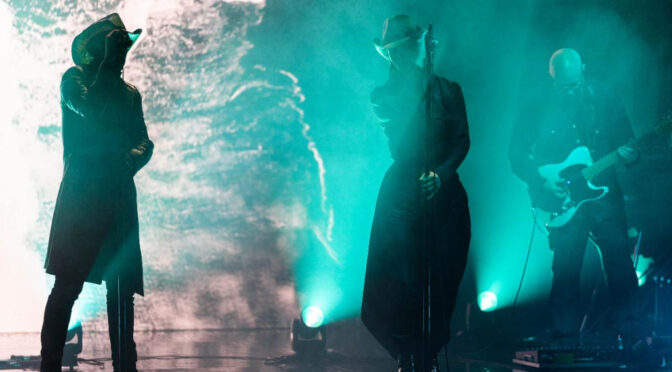 Meeting at the intersection of music and theater, Puscifer is known for their thematic, multimedia-laced tours. From a “Hee Haw”-style jamboree to a televangelist revival, from sitting ringside at a Lucha Libre match to the advent of Agent Dick Merkin and the Pusciforce, Puscifer’s transition from live performances to film is a natural extension of the music-meets-acting troupe. The pandemic-induced dawn of the at-home concert experience provided Maynard James Keenan, Mat Mitchell and Carina Round with the tools to turn to film, having now released two movies to date: 2020’s Existential Reckoning: Live at Arcosanti and 2021’s Billy D and The Hall of Feathered Serpents featuring Money $hot by Puscifer.

“Those with creative minds are restless. Lockdown was only physical, not mental,” offers Keenan. “The Pandemic was the perfect springboard and opportunity for us all to flex our creative muscles. Here is more evidence.”

V is for Versatile: A Puscifer Concert Film featuring music from the V is for… era Puscifer take you into the famed studios of Los Angeles’ Sunset Sound, where everyone from Led Zeppelin to Van Halen to Elton John and Tom Waits recorded classic albums. In this live performance piece, the band invites fans behind-the-scenes as they re-interpret and re-record songs from their V is for… era. Agent Dick Merkin, Major Douche, the briefcase and a few surprise cameos are interspersed amongst the studio footage.

Billy D is in jail, Hildy is on the war path and Peter Merkin, as usual, is up to no good. The saga of the Bergers continues as Puscifer pairs the duo’s ongoing melodrama with a live, track-by-track re-imagination of the band’s critically-acclaimed 2011 album, Conditions of My Parole. Visually, Parole Violator is evocative of Keenan’s North Arizona homestead, with Puscifer’s performance married to striking visuals, dramatic lighting, and in a nod to the band’s 2011/2012 tour in support of the collection, closes with a campfire sing-a-long.

Both V is for Versatile and Parole Violator have album companions, available on vinyl, CD and streaming in November. Pre-orders are available via puscifertv.com.

Born somewhere in the Arizona desert, Puscifer is an electro-rock band, multimedia experience, traveling circus, and alien abduction survivors. The group’s catalog consists of four full-length studio albums: V is for …[2007], Conditions of My Parole [2011], Money $hot [2015], and Existential Reckoning [2020] — in addition to a series of EPs and remixes. Beyond the core trio of Maynard James Keenan, Mat Mitchell, and Carina Round, the group’s ever-evolving ecosystem encompasses Greg Edwards, Gunnar Olsen, Juliette Commagere as well as a cast of characters such as Billy D and his wife Hildy Berger, Major Douche, Special Agent Dick Merkin, and many more. Meanwhile, the moniker’s origins can be traced to a 1995 episode of the HBO classic Mr. Show where Keenan first used the name “Puscifer.” In addition to tallying tens of millions of streams and views, they’ve piqued the curiosity of the press. Entertainment Weekly christened them, “Exceptionally groovy,” and Revolver fittingly described them as “indescribable.” Renowned for an immersive live show, the group’s performances blur the lines between concert and theater, traversing the dusty American Southwest with Billy D and Hildy or the sweaty squared circle with Luchadores. They’ve brought their unique live experience to life everywhere from Coachella to Bonnaroo. On their 2020 debut for Alchemy Recordings/Puscifer Entertainment/BMG entitled Existential Reckoning, Puscifer track Billy D back to the desert and, just maybe, uncover the truth about aliens once and for all.