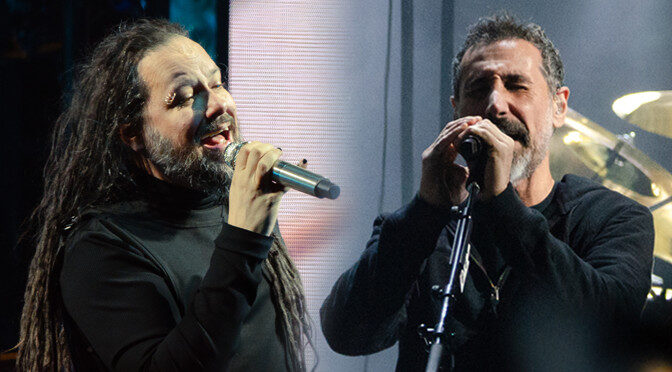 PHOENIX — In 2020, System Of A Down announced a massive tour co-headlining with Faith No More and Korn, with support from Helmet and Russian Circles. As the pandemic progressed, the shows were postponed a total of three times, with the final postponement due to Serj Tankian (frontman of System of a Down) contracting COVID in October. Faith No More also announced that they would be canceling the concerts so Mike Patton could step back to handle mental health issues. Korn had dropped out, but once Faith No More canceled, Korn returned. To the delight of the metal faithful in Arizona, it was also announced that this line-up (excluding Faith No More and Helmet) would be playing a show at an arena in Phoenix now known by many names. This arena, built in 1992, is now known as Footprint Center and is now on it’s 6th name. The arena just completed a much needed remodel, which brings the once dated arena firmly into the 21st century.

The show started off with Russian Circles, a group that was founded by two childhood friends, Michael Sullivan and Dave Turncrantz, who play guitar and drums respectively. They are joined by Brian Cook, who is the bassist, baritone guitarist, and keyboardist for the instrumental band. Surprisingly, the set was only 18 minutes and 3 songs, but in that short timeframe the post-metal band impressed the audience with their highly technical prowess. If Russian Circles is billed as an opener, it is well worth your time to arrive early enough to catch this trio’s excellent mastery of crescendos and crashes of bass and drums.

With a “Here we go!” from lead singer Jonathan Davis, the first bars of Korn’s “Here to Stay” began, spotlights flashed from the stage, and strobing lightboxes backlit the band. Throughout the night, the unmistakable voice of Davis was replaced many times by the audience, as he solicited audience participation. When performing live, Korn has an underappreciated ability to echo the sound of their studio recordings, and it speaks to the vast talent of not just Davis, but guitarist Brian “Head” Welch, guitarist James “Munky” Shaffer, drummer Ray Luzier, and Ra Diaz (who is filling in for Reginald “Fieldy” Arvizu while he takes time to “heal and reflect at home”).

Korn is well known for their staggeringly large discography, with 13 studio albums having been released, and a 14th out on February 4th named “Requiem”. The audience was treated to the live debut of the song “Start the Healing”. As part of the upcoming album release, Korn will be playing a “Requiem Mass” on the evening of February 3rd at Hollywood United Methodist Church, which will be live-streamed worldwide.

Three songs later, Davis came out on the stage with his bagpipe, playing the intro to “Shoots and Ladders,” the third single from their eponymous debut album. This, predictably, caused the crowd to erupt, much to the delight of Davis. There is a connection and love between Korn and the audience, which takes the shows to another level. Davis is 4 months removed from his battle with COVID, which saw him have to sit on a throne and use oxygen while performing during a show on August 27th. It is a relief to watch him move around with no noticeable side effects from his battle, which he said scared him shitless.

The crowd, at the urging of Davis, held up their middle fingers collectively during “Y’All Want a Single” – a song written in response to Sony asking for them to “write a radio hit.” This likely is not at all what the poor sap who made this request expected to get, but it has become a fan favorite. Other hits included “Freak on a Leash,” “Did My Time,” and “A.D.I.D.A.S.” As Korn wrapped up, Davis thanked the fans, and almost ominously said, “…we’ll come back and fuck this motherfucker up one more fucking time.”

As the opening notes of “X” played, System Of A Down was silhouetted against the curtain in the moments before it dropped. Serj Tankian – vocalist and keyboardist – was center stage, flanked by guitarist Daron Malakian to his right, bassist Shavo Odadjian to his left, and drummer John Dolmayan almost directly behind him. “Prison Song” was performed next with an arsenal of nearly blinding strobes that assaulted the audience. An extraordinarily intense light show, designed to match the intensity of their music, would persist through the night.

To watch System Of A Down play is like watching one of the great Renaissance masters paint. A great painter must carefully select their canvas, their paint, and then they must be able to combine these quality pieces in such a way that it withstands not only the test of time, but withstands the test of the taste of that particular moment. System Of A Down does this with an ease that defies the expectations of a band that has only released 2 new songs in the last 16 years. Tankian’s voice is the paint over the music that stands in for the canvas, and we in the audience are the viewers who do not necessarily realize what beauty we are witnessing in the moment.

Tankian has one of the greatest vocal ranges in all of metal at 4 octaves. This was on full display in “Chop Suey,” one of the songs that landed them squarely in the mainstream limelight, though the metal community was made aware of the band a few years before with the release of their first album and the success of “Sugar” and “Spiders.” While lavish praise should be heaped on Tankian for his immense vocal talent, the same praise should also be heaped onto Odadjian and Malakian, as they make highly technical and rather difficult riffs look absolutely effortless.

Imagine how incredible it would have been if Tankian and his would-be tour mate, Mike Patton of Faith No More (who boasts an unbelievable 6 octave range) accompanied each other for one song.

It is impossible to discuss System Of A Down and their impact without discussing their political contributions. Tankian in particular acts as a prominent voice for the downtrodden and the less fortunate, both in lyrics and in his personal capacity. The two new songs, “Genocidal Humanoidz” and “Protect the Land,” were released in response to the Nagorno-Karabakh war in 2020. The two singles raised about $600,000 for the Armenians who were affected by the devastating war. Both songs were played separately during this concert, with Malakian first thanking the audience for the last year, and then starting to explain what the song “Protect the Land” was about, only to turn to Tankian to ask him to explain the song. Tankian turned to the audience and said, “This one goes out to all the indigenous people in the world that are fighting for their rights. For all of the people in the world protecting their families against evil and injustice. We are all united, and we are one.” As the band launched into the song, the lights behind the band lit up in the colors of the Armenian flag.

It could be argued that the mark of a great show is that it alters the perception of the passage of time. In this case, by the time the band played the opening notes of “Sugar,” their first hit that made the metal world take notice of the band with Dadaist lyrics, a distaste of the exploitation of the less fortunate, and a lyrically devastating take on war – both the wars between countries and the war on drugs – it felt like only moments had passed, when in reality it was an hour and a half set.

Earlier in the night, Davis had said, “It’s so good to be back up here, y’all. The world has been going through some crazy shit, and this is where I get to forget all about it. I want y’all to do me a favor tonight: I want you to just forget about everything. We got System Of A Down coming up, and I want you guys to do this for me: just forget and have a good fucking time!” This challenge was accepted by the enthusiastic crowd, who spent 4 hours losing themselves to the sounds of these masters of metal as they performed their greatest hits.

System Of A Down Online: