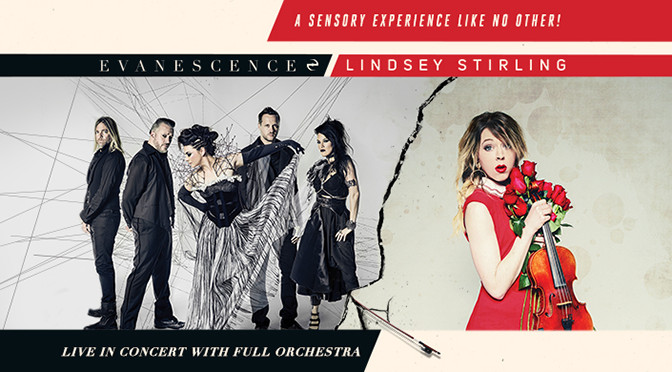 Artists’ pre-sales will begin tomorrow (Wednesday, March 7) at 10am local time. Tickets for the tour will go on sale to the general public beginning Friday, March 9 at 10am local time at LiveNation.com.   Evanescence will offer a limited number of VIP packages for purchase that include premium seating, attending sound check and a champagne toast with Evanescence.  Visit Evanescence.com for full details.

“Lee firmly re-establishes herself as one of rock’s pre-eminent vocalists, exhibiting an impressive range that still packs a wallop…a synthesis of rock, classical and EDM” – Variety

Lindsey Stirling will also offer a limited number of VIP packages for purchase that include premium seating, a pre-show party, and exclusive merchandise.  Visit LindseyStirling.com for full details.  VIP Packages will go on sale tomorrow (Wednesday, March 7) at 10:00 am local time.

“Live, Stirling’s performance takes on a new level of respect as you see her stiff left arm holding the violin while her body twists, contorts and moves around. She never misses a note or beat as her music carries the listener on a whirlwind of instrumentals.” – Creative Loafing

Both artist’s shows will be accompanied by a full orchestra, highlighting both acts musicality and their incredible performance abilities that continue to blow fans away. The orchestrated performances will also perfectly accent the astounding amphitheater venues across the U.S. and Canada that the two will be performing in, making for a magical summer evening.

The two artists recently collaborated on the song, “Hi-Lo” from the latest Evanescence album, Synthesis, which features a virtuosic violin solo by Lindsey Stirling.  Listen to the track HERE.

*On Sale TBA
+not a Live Nation date