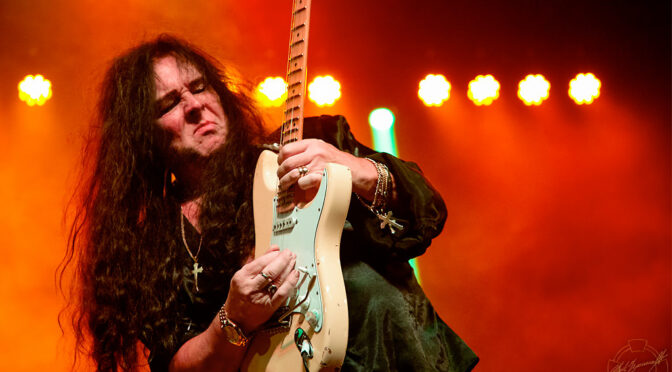 Tempe, AZ — Swedish neo-classical metal guitarist Yngwie Malmsteen thrilled eager Marquee Theatre guests, along with openers Jessikill, Culprit and Deimer.  The May 24th show was part of the “Parabellum Tour 2022”, named after Malmsteen’s 2021 album. He has been known as the gold-standard of guitar players throughout his career and fans couldn’t get enough of his masterful riffs, or the giant wall of 44 Marshall amplifiers. The show definitely “goes to 11” – as multiple people mused, referring to the famous line from “Spinal Tap”. How could it not? This tour doesn’t skimp on skills or thrills!

Jessikill from San Antonio, Texas opened the show with power-metal songs so heavy you can feel the bass in your soul. Led by Jessica Marie Espinoza on vocals, the band boasts 3 albums and awards that include “Best Metal Band”, “Top Local Band of the Year” and “Best Female Performer” at the 2016 SANA Awards. Jessikill has played opening spots for such national acts as John 5, Faster Pussycat and Jake E. Lee since they formed in 2012.

On lead guitar and keyboard is the talented Jyro Alejo, on drums is Jordan Ames, and bringing that big bass sound is Arturo Knight, who is also a backup vocalist. Regrettably, their set was short, clocking in at 18 minutes. It was hardly enough to showcase Espinoza’s vocals, which switched from a rough growling to high-note harmonies with effortless transitions, leaving the room wanting more.

The band’s Wikipedia page cites the original band’s break-up in 1985 to pursue “other endeavors”. Culprit still maintains an 80’s hair-metal band feel, sound, and look. Colon sings while swinging the microphone stand in a Steven Tyler-esque fashion, dressed in white leather hip-hugging pants and jacket with no shirt. Limited only by the seemingly short set, Culprit’s act stood the test of time and proved to be a solid opener for the tour.

Not many musicians have IMDB credits that include being killed by Michael Myers in the “Halloween” movie series, but Kurt Deimer does. His character “Teller” didn’t survive the 2018 film with Jamie Lee Curtis, but Deimer is the one killing it in real life. He has a diverse resume including his title of President and Chief Executive Officer of Coolants Plus, Inc. (a wholesale chemical company), further IMDB acting and producing credits, and leader of the band Bald Man, whose 10 song debut album Music For the Rest of Us was released in 2020.

In 2022, Deimer and Canadian Bon Jovi guitarist Phil X (Xenidis) joined forces to provide direct support for the Parabellum tour. Deimer, sporting a black top hat and bedazzled beard, took the stage with a powerful presence. Teetering on the stage’s edge, he enticed the crowd with his catchy harmonies and haunting spoken lyrics on the band’s songs “Hero”, “Only Time Will Tell”, and “Back of the School”, as well as a metal version of Pink Floyd’s “Have a Cigar”. The set concluded with a heartfelt plea by Deimer to the crowd, asking that we “be nice to each other”.

In researching Yngwie Malmsteen, the term “virtuoso” is used repeatedly to describe him. Born Lars Johan Yngve Lannerbäck in Stockholm, Sweden, Malmsteen’s first band was formed when he was only ten years old. His musical influences included the classical genre, and in particular, the genius of Johann Sebastian Bach, as well as more contemporary artists, such as Ritchie Blackmore. His forty-year career includes 22 studio albums, and in 2009 Time Magazine named Malmsteen number 9 amongst the 11 greatest guitar players of all time.

Malmsteen played a ninety-minute set, covering a variety of hits from his expansive music career. Setting the mood were red stage lighting and fog machines, and the sound from the wall of Marshall amplifiers was so intense it felt like it could knock you into the wall. A cover of “Smoke on the Water” by Deep Purple with vocals by Malmsteen and a very metal version of the “Star Spangled Banner” were interlaced with classical and bluesy riffs. A master at his craft, Malmsteen plays with a finesse and skill unlike any other and sets the bar for aspiring guitarists.

A fan commented on the artist’s official Facebook page that his wall of Marshall amplifiers was fake, but Malmsteen was quick to retort, “I know it’s really sad, they’re very expensive and I take the real deal and everyone is accusing me of them being empty, it’s ridiculous :(”. Another fan made the astute observation that “The Great Wall of China and Yngvie’s wall of Marshalls are the only man-made objects visible from space.” They’re not wrong.

This was a Tuesday night that won’t soon be forgotten. It was mind-blowing. The 2021 release of the Parabellum album is available online, and one can assume it’s as fierce through headphones as it was live. “Parabellum” is a well put-together tour with the unique combination of Jessikill, Culprit, Deimer, and Yngwie Malmsteen.