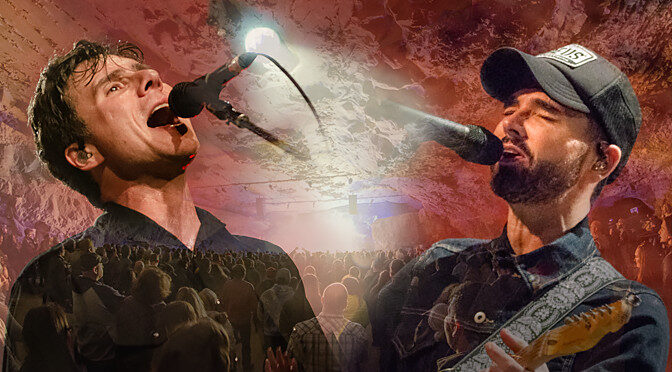 Pelham, TN — If you were to ask any emo fan who spent their formative years in the early 2000s, “Which bands would make up the tour lineup of your dreams?”, you would get a plethora of answers with combinations that sound much like the When We Were Young Festival happening this fall. But, more than likely, two bands’ names would pop up in nearly every combination provided: Jimmy Eat World and Dashboard Confessional.

These bands, who have provided the soundtrack to the lives of countless individuals over their 20+ years of existence, have accomplished much over the years. However, there is one achievement they were missing until this year: hitting the road together on a tour. This “oversight” was rectified when these two powerhouse bands joined forces, and asked Sydney Sprague to open for them on the tour dubbed “Surviving the Truth,” which is a mash-up of Surviving, Jimmy Eat World’s 2019 album, and Dashboard Confessional’s newest album All The Truth I Can Tell, released on February 25th of this year.

Fortunately, they also added another new experience and scheduled two back-to-back nights of shows in The Caverns – a unique venue near an area known as TAG – a place where Tennessee, Alabama, and Georgia all converge. Being about an hour away from every major city, a bit of travel is required to get to the venue – through a tiny town where the livestock that disinterestedly watch you drive by likely outnumber the human residents, down Charlie Roberts Road until you reach the end, and find yourself facing a black building with a massive painting of a Big Mouth Cave Salamander named Sally painted on the side of it. This is not the end of the journey, however, as you must now walk down a sloping path into the mouth of a cavern, and then step through enormous wooden doors where the words “Welcome to The Caverns where the Great Spirit brings all people together through music” are carved, using the Sequoyah script of the Cherokee. It is here your journey ends and the adventure begins…

Sydney Sprague – an Arizona based musician who first started writing and playing at 11 and performing at 14 – would be first onstage. Before the band kicked off the show with “i refuse to die” – the first track of 2021’s maybe i will see you at the end of the world – she gave the audience the first of many puns of the night: “If you haven’t heard of us, that’s ok. we’re pretty…underground.” As the crowd chuckled, she deadpanned: “it gets worse.”

This could not have been further from the truth, as Sprague and her band – comprised of Chuck Morriss III (keyboard, bass), Larry Gast III (guitar), Sebastien Deramat (guitar), and Tom Fitzgibbon (drums) – are all exceptionally gifted musicians and artists who bring an enormous amount of energy that complements her laid back nature. Sprague has a quick, dry wit and the ability to capture the audience’s attention and form a bond that both her and the crowd feed off of as the set goes on.

While some may compare her vocal timbre to Michelle Branch or Taylor Swift, and it should be noted these are fair and valid comparisons, it would be a mistake to attempt to shove Sprague’s sound into a box and slap a label on it. Her vocals and sound defy conventional expectations, she writes songs that are relatable, and her performances are simple and straightforward – leaving the audience wanting more in the future. Her 8-song set included most of the tracks on her debut album, which had the paradoxical effect of leaving the audience both wishing for a bit more, and yet satisfied with what we were able to witness from this budding star.

Between sets, one of the quirks of the cavern became quite obvious: it had the audacity to form without giving a backstage for the bands and their crews to work with. There is no easy access to move the equipment on and off, nor to unload and then load everything back into the waiting vehicles outside. This unusual set-up meant the audience was able to watch the pre-show rituals of the bands and view what the hard-working (and often underappreciated or forgotten) crews do with the equipment they hastily move off and onto the stage.

Dashboard Confessional was up next, with Chris Carrabba singing “The Brilliant Dance” with an acoustic guitar while the rest of the band stood just off stage. As he finished, they joined him, and a jovial Carrabba asked the audience if anyone had been in attendance last night. There were surprisingly few affirmative replies. Carrabba then asked, “Is anyone here tonight?” and as the cheers faded, he exclaimed, “Me too!” as the first notes of “The Good Fight” started to play. At the end of the song, he asked the audience to give a round of applause for Sprague and her band, and then caught himself cussing when he spotted a kid at the front of the crowd. Asking the young fan if he had ever been to a show in The Caverns, he stated with a huge grin, “I’ve only been to one other show here, and it was last night!”

Carrabba – joined onstage by Armon Jay (guitar), Scott Schoenbeck (bass), Abigail Kelly (back-up vocals), Chris Kamrada (drums), Dane Poppin (keyboard, guitar) – mixed the nostalgic hits like “Stolen” and “Vindicated” with “The Better Of Me,” the only song from All The Truth I Can Tell. Through it all, Carrabba radiated joy and excitement, possibly because he was playing inside of a cave, but also because, as he noted multiple times, it was just so good to be back together with everyone again. Carrabba is just under two years removed from a motorcycle accident that nearly ended his career, and to be back on stage after all he has endured during his recovery must feel like a miracle he celebrates nightly on this tour with 1,500 or so of his closest friends. His energy radiated out across the audience, many of whom sang along with him during the 17-song set.

Jimmy Eat World took the stage during the opening notes of “Futures,” the title track from their 2004 album. It only takes a few verses of watching frontman Jim Adkins pour everything he has out in front of the enchanted audience while drummer Zach Lind, guitarist Tom Linton and bassist Rick Burch effortlessly provide the canvas on which each song is painted anew on each night.

This is the magic of Jimmy Eat World and perhaps the secret of their longevity: their ability to take the songs that helped emo kids grow into slightly less emo adults and make the nostalgic magic that you feel hearing “Sweetness” on the radio disappear during a live show, and make it feel like you’re hearing and experiencing the songs for the first time. Other favorites like “Pain,” “Hear You Me,” “23,” and “Lucky Denver Mint” were included in the set list as well.

Halfway through the show, Adkins switched over to an acoustic guitar to play “555” – a song that has not only inspired a comic book, but also a near-cult-like following among some fans, including a small Facebook group dedicated to posting solely about 555 found in daily lives. Adkins, like Sprague and Carrabba, expressed awe and disbelief that they were playing in a cave, and then threw in a joke about telling a distant relative that he was in an underground rock band. If there were any surprises from the night, it would be that the bands didn’t end up making more bad cave and rock puns.

The level of exertion that Jimmy Eat World puts into each show can evoke the image of a fighter who has gone 10 rounds with their opponent, leaving the ring glistening and triumphant. As Jimmy Eat World closed the show with their most well-known hit “The Middle,” towels awaited them just off-stage. The song generated the the perfect energy to end the incredible evening… the best way to end the adventure at the bucket-list worthy venue, and to send those lucky enough to bear witness a once-in-a-lifetime show on a journey through the improbably cold pre-spring night to wherever their roads may carry them.