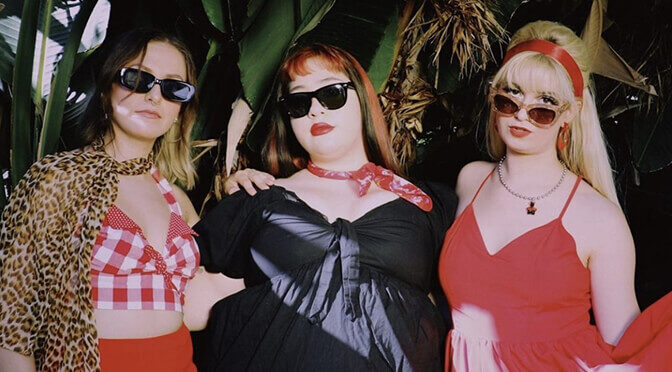 So Cal all-female rock trio The Aquadolls will be on the road with Incubus and Sublime With Rome from July 24 through September 3rd. See dates below.

Watch for new music coming soon. In the meantime, the band’s latest single titled “Help (I’m Falling 4U and I Can’t Get Up)” is out now.

Stream the single here, and stream the video here.

Frontwoman Melissa Brooks says, “This song tells the story of falling for someone and starting to obsess over them. It’s about imagining all of the things we could do together, both romantic and twisted, showing the darker sides of having a crush and longing for more to come from it.

Produced by Fat Mike of NOFX and Jon Graber, this song is a sultry slow jam compiled of surfy guitar with a heavy kick drum, hitting our heart strings with every chord.”

“Help (I’m Falling 4U and I Can’t Get Up)” follows on the heels of the trio’s recently national co-headline tour with Republic Records’ Sitting On Stacy, and their recent appearance at Ventura, CA’s Surf Rodeo.

Already a festival favorite, having performed for the masses at Lollapalooza, Ohana Fest, and Beachlife Festival, The Aquadolls will again grace the stage at Austin City Limits Festival this October.

The 3-piece has just finished recording a new LP that is scheduled to be released soon on Enci Records.

The Aquadolls was formed in La Mirada, CA in January 2012 by lead singer and songwriter Melissa Brooks, who began recording bedroom demos of her songs. She eventually released the album We Are Free in early 2013, followed by the LP Stoked on You in December 2014. After a brief break from releases, the stars aligned in July 2018, and the new era of The Aquadolls commenced with Jacqueline Proctor on drums and Keilah Nina on bass. The band grew as a powerful threesome leading up to the release of The Aquadolls’ highly anticipated second album, The Dream and the Deception, recorded and self-produced by Brooks and self-released October 28, 2018, on Aqua Babe Records.

Following their sophomore album, the trio self-released the single “Suck on This” in summer 2019, followed by their 2020 viral cover of Lash’s “Take Me Away” (a track made famous via its inclusion in the 2003 Lindsay Lohan-starring Disney film ‘Freaky Friday’).

After signing with Enci Records and releasing a trio of singles (including the track “Cry Baby” which hit the top 10 Alternative Specialty Charts), The Aquadolls, whose sound mixes indie, punk, surf rock, and vintage bubblegum girl-group swagger, went on to garner praise from the likes of Spin, Paste, Alternative Press, New Noise Magazine and many more.

“Coming from the suburbs of Los Angeles, the Aquadolls are punk pioneers in the broadest sense. They ooze eclecticism, stacking elements of indie– and surf-rock on top of a distinctly pop-punk foundation. While their sound might not exist at a comfortable spot for genre purists, fans of sonic experimentation will surely find their versatility entrancing.”- Alternative Press

“The Aquadolls exude a positively energetic, and powerfully confident vibe. A mix of influences and life experiences between this trio, makes for their inspiringly eclectic, powerful punk rock n roll music.”- Wall Of Sound

“If there was a missing link between 60s girl groups, California surf-pop, 90s skater rock and Taylor Swift’s assertive pop-sassiness it might be this lo-fi band helmed by singer-guitarist Melissa Brooks from Southern California.”– New Zealand Herald

“In line with other historical all-female bands such as Bikini Kill.”- The BC Heights

“If you were looking for a new mood-booster, this is it.”– Riff Magazine

“The Aquadolls are a So-Cal trio primed to blast off. Featuring surf-rock vibes alongside pop-punk vocals, these witty women excel at blending genres and garnering attention they rightfully deserve.”– Idobi Radio

“…fuzzy surf-psych-grunge pop from Southern California with an ebullient sing-a-long vibe.things are on the up-and-up for this cool crew.”– *Oh My Rockness*

“The Southern California band effortlessly pours out infectious shoegazey bops, earnest headbangers, cosmic surf-punk ballads, and electrified power-pop anthems. Despite the sheer range of styles and genres reflected in their music, there’s a real cohesion to The Aquadolls’ addicting combination of sharp edges and even keel. No matter what vibe a given song has, it’s clear The Aquadolls are putting everything they have into the music they’re making.”– Hard Noise

“This is a rock band composed of womxn unafraid to unhinge their music from easy listening, a powerfulness laced with irony and sarcasm and sweltering feeling in all of their songs.”– Lithium Magazine

“The group has continued to push themselves creatively in new directions with each release.”– All The Alt Things

“The Aquadolls have managed to piece together an anthem-in-waiting. Powered by woozy chords and a hazy soundscape set atop delicate but resonating vocals, ‘Disappearing Girl’ feels as though it’s been delivered to us fresh from (a) distant dream. Fingers crossed that world domination is part of their plan.”– Blunt Mag

“A shimmering piece of indie rock, “Disappearing Girl” is built on fizzling layers of percussions as The Aquadolls toy with the raw elements garage and chest-swelling air of dream rock.”– Aupium

“A punk rock power ballad doesn’t sound like it could be possible, but The Aquadolls somehow pull off the impossible.”– If It’s Too Loud