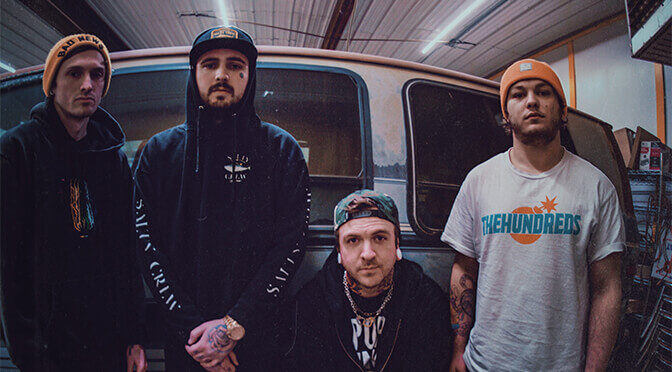 Pop-punk band Brooklane recently released their new single “Breakaway” on April 28th of this year, and they are gearing up for a tour with details yet to be revealed (get notified here). Inspired by bands like The Story So Far, State Champs, and Neck Deep, they debuted with the Roll With the Punches EP during the pandemic in 2020.

RYAN: What was the recording experience like for your debut “Roll With the Punches” (2020)? Was it recorded pre-pandemic?

“The recording experience for “Roll With The Punches” was pretty standard for the most part until the pandemic hit. We had to find ways to finish recording safely. Luckily, we just had to add finishing touches and were able to release it during the pandemic.”

RYAN: “Roll With the Punches” was first released as an EP but is now listed as a deluxe LP released in 2021.

When was the decision made to expand it?

“We made the decision to expand it because we wanted to provide our fans with alternative reimagined versions, as well as softer songs to diversify our catalog.”

RYAN: I’m always fascinated by cover art. Your early singles and first album all featured color variations on the same image: of an arm preparing to throw a Molotov cocktail.

Was there a reason behind this specific image, especially with the political upheaval in America these last five years?

Honestly, that cover art has no greater meaning other than being reflective of our energetic and explosive sound, while staying true to our band’s visual aesthetic.

RYAN: The album has got some strong punk, pop punk, and hardcore DNA in it, which makes the tracks “Here to Stay” and “Empty Room” stick out to me. The slower tempo and acoustic guitars really highlight the heartbreak of the lyrics on each.

Were both songs always written to be more emotionally raw in that way?

Yes! Both of the songs were intentionally written to be more emotionally raw. We always try to pull from all of our personal experiences to help as many people as possible. Fun fact, “Empty Room” was never written for Brooklane and almost didn’t make the record.

RYAN: As a huge fan of punk and hardcore, what always drew me to it was that the music provided an emotional outlet for pent-up emotions. The best bands to do it always have lyrics that express these same feelings. “Here to Stay” and “Bite the Bullet” dig into dealing with a broken heart, and “Anxiety” deals with mental illness and reminds me, at least thematically, of The Offspring’s “Gotta Get Away.”

While a lot of people will share more freely about dealing with heartbreak or regret over a breakup, there’s still a societal stigma with mental health. Was it difficult being as open on “Anxiety”?

Anxiety is something that we all struggle with as band members and it is so important to us to be open and honest to our fans who may benefit from relating to what we are going through. We write these songs to help our personal healing journeys, but more importantly, for everyone else in the world who may be struggling. If we didn’t open up about these hard topics in the hopes to destigmatize these conversations, we would be doing a disservice as musicians with a platform.

RYAN: The deluxe edition of the album featured reimagined versions of “Anxiety” and “Ship Wrecked,” which highlights the melodies of each song even more.

What was the inspiration behind doing these reimagined tracks, and could they be a possible direction the band might take on future albums?

We really wanted to produce these reimagined tracks to further diversify our catalog and give our fans musical variety overall. We felt strongly like some of these more emotional songs should have more emotional instrumentals. We definitely hope to continue weaving these types of tracks into our albums in the future!

RYAN: I really like the new single “Breakaway” because it feels like the whole band leveled up on the song, especially because it has a great “firework” music moment with the sort of muted opening chords building to an explosion as the band goes full force into the song. Across the board, it feels like everyone really shines.

Was there a feeling during the writing and recording of the song that this would be something as special as it seems for the band?

“Breakaway” is a song that we all really love and all individually relate to as members as it was written based upon our own personal experiences. With that said, we really wanted to give it the spotlight it deserved as a single, especially during Mental Health Awareness month.

You just announced that you’ll be crowdsourcing your next album.

What motivated this decision to have direct support from your fans ahead of the release?

“We are headed into the studio with Andrew Wade next month to create our dream EP, and thought this would be a great opportunity to ask for support from our fans to help us in our mission to destigmatize mental health by utilizing our music to start important conversations so we all feel less alone in this world.”

What are you most looking forward to about playing on tour? Obviously “Breakaway” will get its first live performances across the cities…

“We have a ton of shows in the works for this year and can’t wait to finally connect with our fans in person.”