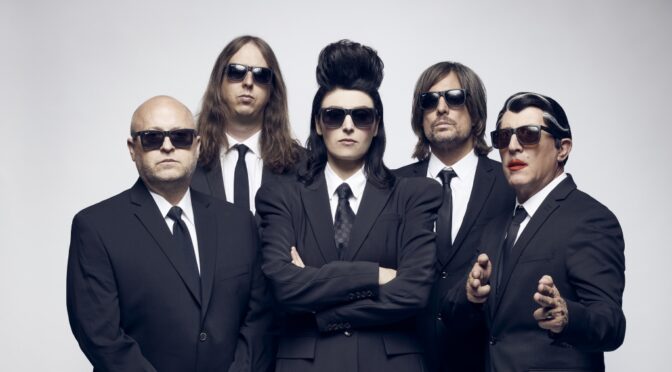 Los Angeles – Puscifer unveil the next chapter in the saga of desert dwelling scamp Billy D with the psychedelic, alien-infused mini film for “Bullet Train to Iowa“. Watch it here.

“The ‘Bullet Train to Iowa’ video is sort of a bridge between the Money $hot Live at the Mayan Theater performance (“Billy D and the Hall of Feathered Serpents”) and the Existential Reckoning Live at Arcosanti performance,” explains Maynard James Keenan. “Kind of like what ‘Rogue One’ is to the Star Wars films, but without the Storm Troopers and snarky robots.”

The clip was created by longtime Keenan collaborator, Meats Meier. Meats’ work with Puscifer spans the band’s history, from the band’s debut video, “Queen B”, which saw the introduction of the group’s de facto mascot of the same name, to the special-ops laced “Dozo” video, and most recently, the prescient “Apocalyptical” clip, which features the visual wizard surfing the pandemic-swept streets of Los Angeles. “Bullet Train to Iowa” also features a subtle nod to Money $hot, with the cowboys featured on the album’s cover, serving as bartenders in the newly released footage.

“Bullet Train to Iowa” comes from the band’s recently released album, Existential Reckoning (Alchemy Recordings/BMG). The 12-song collection, featuring artwork from Daniel Martin Diaz, has received widespread praise with Variety saying “…the airily hypnotic electronic rock…works…brilliantly,” Stereogum describing the music as “darkly playful,” and Revolver noting “you’re highly unlikely to find another album that explores the fear and loathing of our uncertain times in as chill a fashion as the latest from Maynard James Keenan’s art-rock outfit Puscifer.” Download and stream the album here.

Puscifer Performs Money $hot in Its Entirely on Apr. 17

The band’s next visual offering arrives April 17, with the global streaming event, “Billy D and The Hall of Feathered Serpents featuring Money $hot by Puscifer”, a performance that sees Puscifer build upon their Luchador-infused performances surrounding the 2016 album, Money $hot (which will be played in its entirety). The production highlights Puscifer’s unique marriage of music-meets-theater, having seen the touring incarnation hailed as “extraordinary” (Kerrang!), “stunning” (Loudwire), and “a modern blend of ‘Saturday Night Live’ and ‘Monty Python’s Flying Circus’” (Relix).

Los Angeles’ historic Mayan Theater, a 1920s era revivalist theater featuring original artwork by Mexican painter and sculptor Francisco Cornejo, serves as the backdrop to the one-time outing. The elaborate cultural landmark, with its jaw-dropping Mayan calendar infused chandelier and a lobby dedicated to the bird-meets-reptilian deity Quetzalcoatl, gave birth to the performance’s title. “While looking both forward and backwards, we stumbled into The Hall of Feathered Serpents,” explains Mat Mitchell. “The perfect site to pay homage to the Money $hot album and tour.”

Born somewhere in the Arizona desert, Puscifer is an electro-rock band, multimedia experience, traveling circus, and alien abduction survivors. The group’s catalog consists of three full-length studio albums—“V” is for Vagina [2007], Conditions of My Parole [2011], and Money Shot [2015]—in addition to a series of EPs and remixes.

Meanwhile, the moniker’s origins can be traced to a 1995 episode of the HBO classic Mr. Show where Keenan first utilized the name “Puscifer.” In addition to tallying tens of millions of streams and views, they’ve piqued the curiosity of press. Entertainment Weekly christened them, “Exceptionally groovy,” and Revolver fittingly described them as “indescribable.”

Renowned for an immersive live show, the group’s performances blur the lines between concert and theater, traversing the dusty American Southwest with Billy D and Hildy or the sweaty squared circle with Luchadores. They’ve brought this to life everywhere from Coachella to Bonnaroo. On their debut for Alchemy Recordings/BMG entitled Existential Reckoning, Puscifer track Billy D back to the desert and, just maybe, uncover the truth about aliens once and for all.