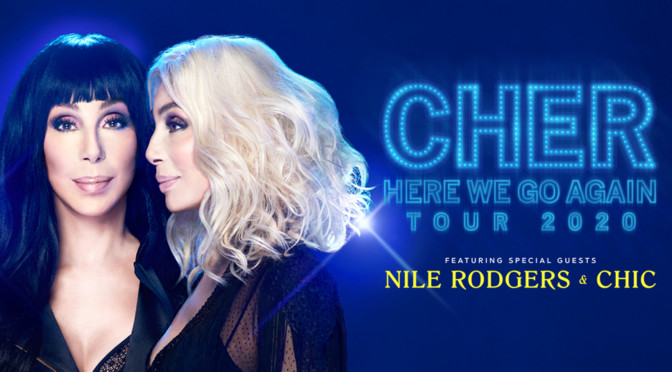 Due to overwhelming demand, Cher has extended her phenomenally successful Here We Go Again Tour, announcing additional dates in 2020. A complete list of upcoming shows follows this release and includes previously announced 2019 dates. On the North American run alone Cher has already sold an astounding 540,000 tickets. Produced by Live Nation, the newly announced dates kick off March 6 in El Paso and will visit cities including Memphis, Miami, Kansas City before wrapping in Sacramento.

“Backed by a slick seven-piece band and ten dancers, Cher paraded around in skimpy clothing and ludicrous wigs, sang duets with her dead ex-husband, rode an animatronic elephant, cavorted with muscular gladiators and spanked lithe burlesque dancers, gossiped about life in Hollywood and belted her lungs out on a succession of crowd-pleasing hits all choreographed with a flamboyance that could make “Strictly Come Dancing” look shy and retiring.
*****(Five Stars) – THE TELEGRAPH UK

Nile Rodgers & CHIC will continue as the special guest for the North American outing. Nile Rodgers is a multiple GRAMMY-winning composer, producer, arranger and guitarist and co-founder of CHIC. Rodgers pioneered a musical language that generated chart-topping hits like “Le Freak,” (the biggest selling single in the history of Atlantic Records!) and sparked the advent of hip-hop with “Good Times.” Nile Rodgers transcends all styles of music across every generation with a body of work that’s garnered him inductions into the Rock & Roll Hall of Fame  in 2017 and the Songwriters Hall of Fame in 2016.

Citi is the official presale credit card of the tour. As such, Citi cardmembers will have access to purchase presale tickets beginning Tuesday, November 5th at 10am local time until Thursday, November 7th at 10pm local time through Citi EntertainmentSM. For complete presale details go HERE.

“She was cheered to the rafters and she deserved it.. What a bonkers brilliant show”
– FINANCIAL TIMES UK

Cher will also be performing on the season finale of Dancing With The Stars on November 25th.

Simultaneous to the announcement of additional tour dates, Cher has just released a new fragrance Eau de Couture which she has been working on for the last four years. It is available exclusively on Scent Beauty HERE. “I made it for people who love perfume, want to smell good who feel that it’s part of who they are, “ commented Cher.

Following the completion of 82 shows by the end of this year, the Oscar, Grammy, Emmy, Golden Globe, Billboard Icon Award recipient and Kennedy Center Honoree shows no signs of slowing down. The Here We Go Again Tour began September 2018 in conjunction with the release of her Warner Bros. Dancing Queen album which landed at No. 1 on the Billboard 200 Charts. Cher recently performed in Europe for the first time in 15 years and received many standing ovations nightly, several five star reviews along with the unanimous raves for her previous U.S. Tour dates.