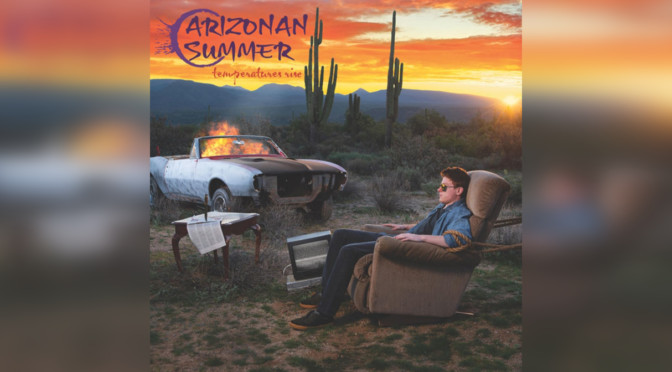 In the seemingly-bygone-but-dearly-missed era of the cross street of life and music, summertime meant a great many things, but cherished most of all were the words, “I’ll make you a tape.” As mixtapes gave way to mix CDs, which in turn gave way to mp3 playlists and eventually music streaming, the idea of a mixtape seems to have faded from the public consciousness for a while. Perhaps though with the resurgence of cassette tapes (Mutemath and Jenny Lewis, among many, many others have released cassette copies of their latest albums), there is still a place for lost nights of driving around listening to the perfect soundtrack of youth. Therein lies the charm of Alt-rockers Arizonan Summer’s debut album Temperatures Rise, as it instantly brings to mind such memories of late-night drives with friends in a time when you had nowhere important to be and life still lay somewhere far on the horizon as a worry for another day.

In the album’s opening track, the simple acoustic “Aardvarks (Intro),” which recalls early Radiohead albums, you can feel Reiswig’s youth, as the lyrics recall that moment in everyone’s early twenties where they’re not a kid anymore, but also definitely not an adult. He sings of those directionless nights, in the song’s opening lyric “Keep your eyes to the stars/And your ear to the radio/You’ve got to get your kicks however you can/When fighting against this life on loan,” but it’s the song’s next line, from which the album gets its title (“Temperatures rise/it’s just a fact of life”), that comes the reckoning that the inevitabilities of life are coming for all of us, no matter how lost we feel.

Where “Aardvarks” feels quiet and introspective, “Perpetual Slip” is a shot of early 90’s punk adrenaline. With vocals that recall The Offspring, a soaring guitar solo that feels like moving upwards in a tornado of music, and supported throughout by a rhythm that begins with foot tapping but ends with the urge to pump your fist in the air along with the song. If the opening track is like lighting a fuse, this is the moment when the album soars into the stratosphere and explodes for the listener.

While “Perpetual Slip” is the point where the album’s energy skyrockets, it is the third track, the righteous post-punk anti-love ballad “Anhedonia (I‘m Not In Love),” that emerges as Temperatures’ standout. At his age, Reiswig would be forgiven for filling the album with sappy declarations of love, but instead he uses a shredding guitar to share his nearly-exuberant acceptance of the end of a relationship. There’s no moping in the song, and not a hint of regret to be found, as he closes out the song with his pronouncement to the lover he’s leaving behind that he’ll rip them off like Nicorette patch. To whomever inspired this song, sorry, but he didn’t want to be with you, and he clearly couldn’t care less because he’s moving on.

Where Reiswig turns up the volume for a love he no longer wants, he turns it down for the heartbreaking “Shimmer” to sing about the love he does want but can’t seem to have. It serves as a bookend to “Anhedonia,” and has the feel of later regret when you realize at an awake-too-late hour that the love you had but didn’t want was what you wanted all along. Moving on in these moments is easier said than done, and Reiswig clearly knows this as he closes the song promising, “I promise you I’m still right here;” this is the last hope a lonely heart has before accepting and getting on with life.

The coffee-house folk of “Idle Mind” continues the album’s theme of feeling stuck in the middle of indecision. Its simple guitar-strum melody and toe-tapping rhythm makes for a perfect sing-along moment of appreciating being directionless, as long as you’ve got someone with you, since the greatest memories are born not of intricate plans but what can happen when you don’t have anything in mind and let the moments happen.

While Arizonan Summers may be a showcase for Reiswig’s songwriting, the nearly seven-minute “The Joy of Ulterior Motives,” serves as a showcase for the entire band – guitarist Dylan Ewing, bassist Erin Sperduti, and drummer Kash Filburn. The haunting track, reminiscent of “Mexican Moon”-era Concrete Blonde, sees Reiswig serving a warning to someone who has betrayed him, ending with the parting, “I know that you know pride comes before the fall,” amidst a wall of screeching instruments.

The album’s closer, the aptly named “This Must Be the End” begins with the image of an aimless drive on a full tank of gas. For an album that feels like the perfect mixtape for such a drive, this song has a shrug of acceptance that there are no sure things in life, and sometimes we aren’t guaranteed the happy ending we’re hoping for, but that’s okay.

With Temperatures Rise, Chris Reiswig and his talented band have positioned themselves as more than homegrown talents, and the album isn’t just some local kids giving it a go for the first time. No, this is an album that defies expectations by never settling into anything easy or overly sentimental. It is an album that lives on that cusp of life between being young and being old. It’s in the moments where we crash and burn, tell an unwanted love to get out, feel lonely when we realize it was a mistake, bond over the meaninglessness of it all, and finally accept our fate, turn up the radio, and drive off into the unknown horizon of our futures.