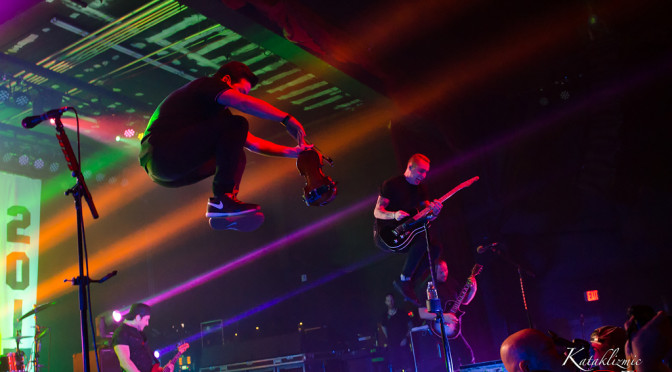 TEMPE, Ariz. — For a few hours on March 22nd, current and former orchestra geeks got to feel like the epitome of cool for one more night as Yellowcard wound down their 20 year career to a sold out crowd at the Marquee Theatre in Tempe.

After an acoustic opening set from former bassist Sean O’Donnell and a brief audio message humorously decrying the use of cell phones during the set, the house lights dimmed and Yellowcard exploded onto the stage with a fiery performance of Ocean Avenue

lead off song “Way Away”. Despite setting the bar high with such a high-octane classic track, the band showed no signs of fatigue as they powered through a massive 24-song setlist featuring tracks from most of their 10-album catalogue.

While the band chose to spend the majority of their stage time blasting from song to song with scarcely enough time to breath between tracks, the few pauses afforded to the crowd were rife with a welcome wistfulness from lead singer Ryan Key as he reminisced on the band’s trajectory leading up to that night. Whether he was explaining how early shows at the Nile Theater in Mesa served to help the band cultivate their first true out-of-state fanbase, or pridefully detailing the various emotions surrounding each album, Key spoke from a place of true sincerity and love for the band which has encompassed the majority of his life.

An unassuming viewer could be easily forgiven for not realizing that Yellowcard’s performance that evening was their third to final show. Every member of the band was visibly having a great time flying around the stage with abandon as they effortlessly nailed every note. Violinist Sean Mackin in particular seemed to visibly buzz with energy as he leaped across the stage and even nailed his signature backflip from the bass cab with seemingly minimal effort. Lead guitarist Ryan Mendez was visibly having a great time playing the old songs as he added discords and dive bombs not present in the album versions, smiling ear to ear as the audience bounced up and down to the tempo.

For Yellowcard these final shows were clearly a celebration of a two-decade career still capable of churning out fantastic material, not the death toll of aging rockers far past their prime. Having loved Yellowcard since they played my junior high auditorium (seriously), it was definitely difficult to watch such an amazing set realizing it would be the last time I could do so.

However, the beauty of a band leaving on the power of their own strengths was a truly amazing site to behold, and one that every attendee will likely never forget for as long as they live.

Highlights: Despite being familiar with much more than Ocean Avenue, I truly have overlooked a great deal of Yellowcard’s albums from the middle section of their career. The sheer energy of this show has definitely lead me to further explore their discography with a newfound appreciation.

Low Points: For the first time in a long while, there truly aren’t any moments I can recall from this show that were anything other than ideal.