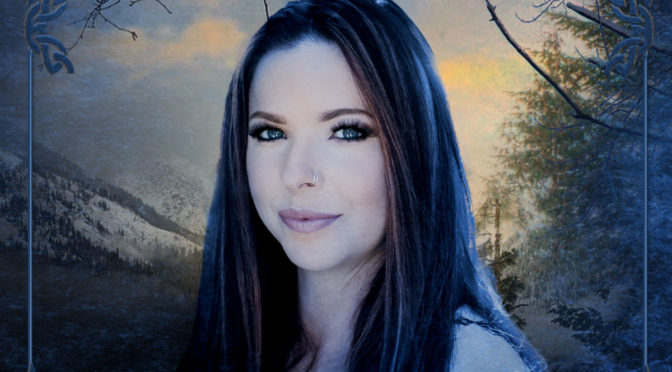 After a crowdfunding campaign that far exceeded the goal, symphonic/Celtic vocal goddess Leah has revealed that her upcoming winter-themed album, Ancient Winter, will officially see release on November 15.

Says Leah, “Now that the crowdfunding campaign is complete, I’m really excited to focus on the release of this album in November. My closest colleagues have told me this album might be some of my best work yet. Regardless, I hope this new music will make the coming winter season much more magical.”

Ancient Winter features eight tracks – five of which are originals and three traditional century medieval songs that Leah puts her own unique touch on. The album offers a slight departure from Leah‘s traditional symphonic metal into a more atmospheric, ethereal sound. It is a more earthy sounding album filled with new instrumentation such as fiddles and uilleann pipes, which give it a beautiful harmony of middle eastern feeling and Celtic folk and fantasy. Ancient Winter proves Leah‘s ability to venture into musical realms beyond metal.

Ancient Winter represents a new approach to holiday music as it celebrates winter themes in a way that is sure to give it a wider appeal. This is not simply a “Christmas album” but rather an emotional journey into transcendent ideals that will inspire any listener from anywhere.

A variety of bundle packages will be available soon HERE. Watch the lyric video for “Redemption,” the first single from Ancient Winter, HERE:

Leah has amassed a generous and dedicated fanbase that has allowed her to crowdfund three of her five recordings without the assistance of a record label. Leah‘s first four albums, Of Earth and Angels (2012), Otherworld (2013), Kings & Queens (2015), and The Quest (2018) are a rapturous blend of a symphonic metal style carefully spiced with Celtic, folk and fantasy. Her emotive vocals are often compared to Loreena McKennitt, Tori Amos and Sarah McLachlan.

Leah – described affectionately by her fans as “the metal Enya” – hails from the coast of British Columbia, Canada, and is inspired by Celtic and world music influences such as Clannad and Enya to European symphonic and progressive metal influences. Her debut self-released album Of Earth & Angels received international critical acclaim, including landing the “The Best Symphonic Metal Album” Metalstorm Award for 2012. Her 2013 release, Otherworld, is a five-song Celtic-metal masterpiece, mixed by Christian “Moschus” Moos at SPACELAB in Germany (Delain, Everon, Imperia) and features the vocals of guitar legend Eric Peterson (Testament/Dragonlord) on the ethereal metal track “Dreamland.” 2014 was very successful year for Leah as she raised over $27,000 through Indiegogo via her fans to record and produce her heaviest album, Kings & Queens, which was eventually released in early 2015 through Inner Wound Recordings. The album received dozens of four and five-star reviews, and helped her gain thousands of new fans around the world. Leah raised over $87,000 in 30 days via Indiegogo and her shop to launch last year’s The Quest, again released via her own independent record label, Ex Cathedra Records, along with Inner Wound Recordings. The Quest received 5-star reviews and critical acclaim.