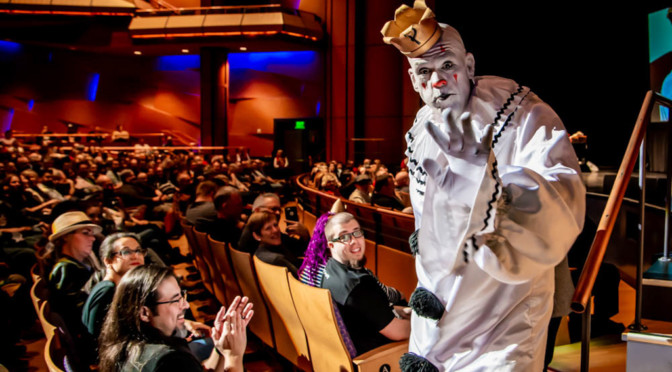 PHOENIX — Many of us have been invited to a pity party and more than likely, we have no desire to attend. When Puddles the sad clown hosts one, however, I recommend you RSVP and make it a priority on your calendar.

I was one such lucky attendee amidst several thousand others that packed the Ikeda Theater at Mesa Arts Center. Not knowing what to expect of the next 110 intermission-free minutes aside from a sweet serenade from the 6’8” baritone crooner in a clown costume, I kept my mind, ears, and eyes open.

Three minutes before the show was set to begin, the house lights were still up as people shuffled to their seats. There appeared to be commotion on the mezzanine level as several audience members looked up to see the unmistakable giant, cuddly clown making his way through the sea of people giving hugs, handshakes, and posing for photos. He effortlessly hurdled the chairs and made a concerted effort to greet as many of his party “guests” as he could, before making his way down to the ground level where he popped through the back doors and dashed to and fro, greeting attendees as he made his way up to the stage.

Puddles Pity Party is anything but predictable, and after enthusiastically giving high fives to some of the folks in the front rows, he hoisted himself up onto the stage and awkwardly rolled to his feet despite the fact that there was an accessibility staircase not 10 feet to his left. It was at this moment I realized that things were going to be shaken up into a concoction of splendor and entertainment that would take all of us on a wild adventure of fellowship and laughter.

The festivities began with Puddles amusingly popping a whopping amount of gum into his mouth and loudly chewing as he read an AARP magazine featuring Kevin Costner.

Much like other aspects of the show, these pieces may have seemed trivial at the time, but became integral parts of his act. Perpetually animated and childlike in his movement at times, Puddles — brought to life by Mike Geier — scoots about the stage on his stool and takes his sweet time getting to center stage to watch a montage of his trials and tribulations while appearing on America’s Got Talent. The sad clown with the golden voice sang his rendition of R.E.M.’s “Losing My Religion”, only to be abruptly stopped by a loud buzzer and a giant red X like the one he received while performing for the show. Despite this, Puddles pressed on.

The irony was not lost in respect to a silent comic entertainer who uses only his vocal ability to belt out emotional tunes; however, the heartfelt depth of his singing left the partygoers absolutely stunned. Puddles performed “The Sound of Silence” to a video of ASL translator, Zoey Stormes, signing a moving performance. Though he is a sad clown who expresses tremendous variety of emotion, from melancholy, to gratitude, to wonderment, it’s virtually impossible to be sad while in his presence. Laughter and words of encouragement from the crowd consistently permeated the silence.

Puddles has several obsessions that attendees learn throughout their time with him, two of which are Kevin Costner and coffee. Never have I attended a party that entailed a coffee break, but there is a first time for everything. In fact, Puddles Pity Party contained many firsts, which takes the Vaudevillian style act from being a show to a full-fledged experience. I lost count of how many times Puddles left his wad of gum behind on his suitcase of goodies and plucked it back up to resume chewing. Additionally, I lost count of how many times he rolled himself off the stage to interact with the audience and bring a new friend up to be a part of the show. Attendees were swept away, transformed into an environment where excitement is found in the simple and absurd.

It was when I oddly caught “the feels” from hilarious snippets of robots falling over to the sound of Puddles’ emotional rendition of Coldplay’s “Fix You” that I realized the power and magnitude of this king-sized clown’s voice. No love song directed at a cup of coffee will ever feel so pure and heartfelt as it did in that theater.

Partygoers were just as much a part of the show, and were brought into Puddles’ world of make-believe. One woman transformed into a wolf that Puddles waltzed with. A gentleman enthusiastically sang the karaoke version of “All By Myself”. Another got to be a rocket scientist, and yet another got to stuff his face with cupcakes while being reminded that the word “stressed” spelled backwards is “desserts”. Puddles even had one of the party attendees summon Kevin Costner, albeit after a failed attempt that accidentally summoned Kevin Bacon.

Other celebrities were attending in spirit, as it was impossible to miss the homages to Axl Rose, Freddie Mercury, and the King himself, Elvis Presley. Puddles’ prowess as an accomplished musician was made apparent through performing on his cardboard guitar that asserts “Do Good Work”, to his various beats on both real and video game drum sets, to his unique song mashups.

Geier, affectionately known as “Big Mike”, who has run a burlesque performance troupe out of Atlanta and also performs with the Kingsized Jazz Trio, has the performer gene coursing through his veins. Traveling with Puddles Pity Party, he has made audiences giggle and laugh warmly all over the world while wearing his endearing heart on his ruffled sleeve.

All you would have to do is go on YouTube and search “Puddles” to encounter countless videos of the sad clown with the golden voice. One of his most captivating being his rendition of Sia’s “Chandelier”, which partnered with Scott Bradlee’s Postmodern Jukebox and also performed on America’s Got Talent to agape jaws and an uproarious standing ovation.

The party on Friday was no exception and the crowd had their phones out to record video of his most notable serenade, as is encouraged. This did not stop Puddles from giving his adoring fans the up-close and personal show they were hoping for, as he grabbed one phone to sing to it and place it in the hand of another individual while picking up their phone and passing it on until there were multitudes of attendees who had incredible footage of Puddles and the cell phone of their fellow party-goer. The laughter that ensued afterward while people scrambled to find each rightful owner was memorable. If anyone can bring people closer together with their fellow man, it’s most definitely Puddles the sad clown.

If you have the opportunity to attend a pity party put on by Puddles, I highly encourage it. How a sad clown can make everyone in a room light up with laughter is a special kind of magic that can only be felt and seen by experiencing it firsthand.