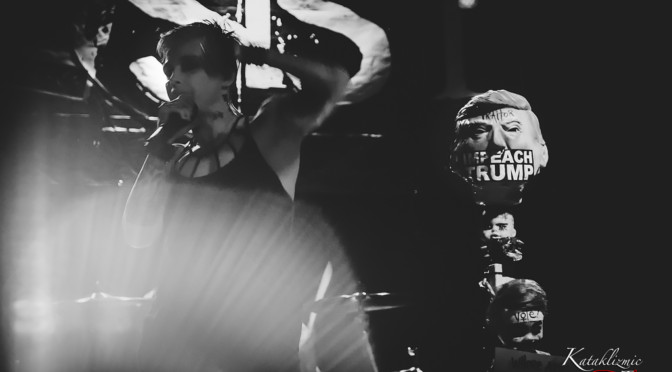 via Napalm Records. According to an exclusive interview with Blabbermouth.net, “This is OTEP like you’ve never heard them before.”

Along with Kult 45’s highly anticipated release, OTEP announced a headline tour, to tease their newest work of art; beginning at The Hard Rock Hotel & Casino in Las Vegas, Nevada on July 5th, and ending in Ventura, California on August, 18th 2018. Tour-mates include Dropout Kings, an AZ-based nu-metal band on the rise (who just released a burning hot new album called “AudioDope” this past Friday), and European progressive rock band Ragdoll Sunday. First to take the stage was anime-themed punk rock band Usagi (formerly Unagi Usagi), followed by progressive metal group CharonIncentive — a band heavily influenced by iconic black and death metal styles, and groove metal band Fatal Malady, whose skull-faced aesthetic captivated the now overflowing trickle of bodies entering through the back of the venue.

Following a supercharged performance by Dropout Kings, audience members began to chant in unison, “OTEP! OTEP! OTEP!” Drummer Justin Kier could be seen jetting on and off the stage, while crew members worked diligently to set the scene. Illuminated only by sporadic flares of light, Kier stepped forward to address the crowd, breaking the ice with a little marijuana-related humor before being joined by bandmates Ari “The Spartan” Mihalopoulos on guitar, and bassist Andrew Barnes. With time to spare, Kier went on to talk about a new, lesser known project in collaboration with Phoenix’s own hard rock female-fronted foursome Doll Skin, which they’ve aptly named “PETO”, once again utilizing OTEP’s iconic anagram, only this time – backwards. The trio commenced with an ear-splitting rendition of Slayer’s “Raining Blood”, immediately provoking a mosh pit nearly the size of the entire room.

After the music faded and fans had settled into standing-room-only once again, Shamaya exploded onto the platform between two vertically-balanced rifles, adorned with severed baby heads, faux weapons, LGBT symbolism, the U.S. flag, and a variety of other props yet to be revealed. Hanging delicately beneath the deceased infant’s haunting yellow eyes was a crooked sign that read, “Where are the children?” It’s no coincidence Shamaya’s performances have been dubbed “a two-decade invasion of the senses” and it’s clear she has no intention of dulling that edge now.

“We want to empower people,” Shamaya says of Kult 45. “This album wasn’t written to only wake people up, it’s meant to carbonate people with the hope and confidence that they can make a difference.”

“Are you ready to riot?!”, Shamaya asked the crowd, growling into the mic with intensity while being met with a reverberating wave of hoots, screams, and howls.

Beneath a beer-soaked haze of golden strobe lights, attendees raged along to political anthems “To The Gallows” (during which Shamaya fiercely spun a hangman’s noose from the end of her mic), “Battle Ready”, and “Lords of War”, succeeded by what is arguably one of OTEP’s most iconic tracks to date, “Crooked Spoons”. Shamaya playfully pulled from her rifling of props for each new track, punching her fist in the air as a bloody, severed pig head was tossed out from behind the stage.

Fans roared along to every word of “Blood Pigs” and “Apex Predator”, off OTEP’s earlier albums Sevas Tra

(2013), erupting with raw emotion and appreciation for the purpose embedded in each verse. OTEP is a band that’s known for it’s ultra-loyal fanbase, but the reasoning behind that is something so much deeper than fame or catchy music. Shamaya’s ability to continually utilize OTEP’s music as a vessel for societal change through a variety of synchronized creative mediums is seriously impactful and evidently similar to that of legendary musical influencers like Woodie Guthrie, Bob Dylan or Zach de la Rocha of Rage Against The Machine.

OTEP went on to make their stance on mass shootings known with newly released track “Shelter In Place”, during which Shamaya aimed a presumably plastic, silver pistol at one of the severed doll heads while chanting with the room, “enough is enough!” Shamaya did go on to clarify her stance however, noting that “guns don’t kill people; people kill people,” before moving into “Zero” off the group’s 2016 album Generation Doom

, which was followed-up by a couple of surprise tracks from the group’s self-titled poetry EP Wurd Becomes Flesh — originally released in 2005, one year prior to OTEP’s infamous addition to Ozzfest (2004).

The audience rippled with excitement as Shamaya waved her rainbow flag high. OTEP moved to close the night with staple track “Equal Rights, Equal Lefts”, prior to transitioning into an anger-charged protest, which peaked to the opening notes of “Wake Up” by Rage Against The Machine; a cover included as the second-to-last track on Kult 45.

In one final call to action, OTEP ignited fans with an ear-splitting performance “Confrontation” from The Ascension

(2007). The props did not end there though; Shamaya had one final trick up her sleeve – a fake severed Trump head. Almost in a single motion, Shamaya plunged the barrel of one of the rifles into the base of Trump’s rubbery neck, twirling him around until the two were facing eye-to-eye, spitting in the mock President’s face before a final punch which sent Trump’s spitclad face soaring out of view.

It was a night of disruption, a night of rage, empowerment, catharsis, emotion and unity. It’s obvious that Kult 45 was intended as more of a social catalyst – a statement piece that simultaneously disrupts and unifies. This is an album that gets people to look; each track furiously spotlights a variety of recurring social issues in the forefront of the United States’ current political landscape. Regardless of whether or not you agree with their stance, OTEP is making one thing exceptionally clear: “Art is resistance. Art aloows us to fight back without violence.”

“This is why we rally, this is why we march, and this is why I write. Because when I look back someday I want to know that I did everything in my power as an artist, activist and citizen.” – Otep Shamaya