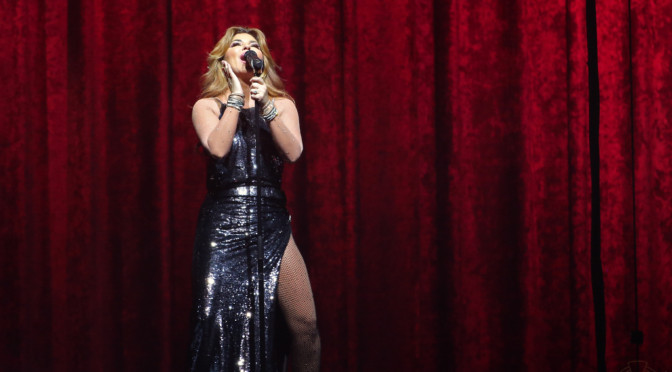 PHOENIX — If there was any doubt in your mind that Shania Twain could ever make a comeback after being out of the limelight for over a decade, rest assured, she’s back. There are over 18,000 seats in Talking Stick Arena, and it was filled to capacity. The roar of the crowd made them oblivious to microburst thunderstorm hovering overhead outside. Their focus was on the stage waiting for their queen of “country pop” to appear. Queen’s “We Will Rock You” was pounding through the PA, foreshadowing the next surprise. The music stopped and the lights went down, but there was no one on stage. The We-Will-Rock-You beat filled the room again as a spot light landed on a second stage in the middle of the arena, where drummer Elijah Wood flailed her blond hair along with her drumsticks. The sleight of hand continued then as Twain magically appeared, coming down the steps at the back of the arena, greeting her majesty’s minions as she crossed the distance to the stage.

As she found her way to center stage wearing a black shimmering long dress, she asked, “Are you ready Phoenix?” Behind her was a projection screen that must have been more than 5-stories tall, so that even those in the nosebleed seats could see her up close. Twain kicked off the show with “Life’s About To Get Good”, the first single from her new album entitled Now

The projection screen was retracted to reveal a truly impressive and dynamic stage set of larger-than-life video cubes. Throughout the song, the show’s cast began to populate the stage, starting with the backup singers and dancers. The musicians were introduced during the second song, “Come On Over” from her third album

of the same name, released in 1997.  This was the album that cemented her in country music history by going 18x platinum, and scoring three number 1 singles.

The video cubes doubled as riser platforms and Twain climbed the stairs to tower over the stage floor as she sang “Up!” Her vocals were flawless all night, and it was amazing how she replicated the recordings that were so familiar to our collective memories. Her signature sound, especially in the lower registers, was especially showcased when the energy level dropped for an intimate moment singing the heartfelt “Poor Me”. The song is a reminder of the tumultuous relationship with her ex-husband that seemed to hover like a cloud over her career, but her burgeoning success and musical independence should eventually overshadow that storyline.

Like a slow wave, everyone had taken their seats during the calm moment of the show. That all changed when the dueling fiddles began “Don’t Be Stupid (You Know I Love You)”. Hands were in the air and everyone was singing along (some more in tune than others). That ended the proverbial Act 1, led to a set change, and Twain’s first costume change.

In the video for “That Don’t Impress Me Much”, you may remember that she wore a sexy leopard print outfit (boots, hooded long jacket, long flared pants, and a little top that revealed her midriff). Well, that was nearly 20 years ago so she didn’t wear that, but she did pay homage with a leopard print dress with a flowing cape-like night robe.

The setlist included 7 songs from the Now album. Next up was “Let’s Kiss and Make Up”, which was reminiscent of her earlier material, and had a calypso feel. The song seemed well-received, and as the end faded, Twain was lowered into a trap door in the stage. A brief drum solo culminated into that We-Will-Rock-You beat again and the crowd was getting revved up. When the guitar riff started though, it was apparent that this was actually an Any-Man-Of-Mine beat.

Costume change number 2 produced Shania Twain in a black cowboy hat, a black leather jacket, a black dress with sheer sides and candy apple red boots. “Any Man of Mine” segued into her breakthrough hit, “Whose Bed Have Your Boots Been Under?” The dancers two-stepped with mannequins made of spring coils that wore red cowboy hats and comically bounced to the music. “Honey I’m Home” continued the country music vibes.

With such a string of hits there is no question that Shania Twain is a gifted songwriter. The focus of the next two songs shifted from staged theatrics, to melody and lyrics, with “I’m Alright” and “Soldier” from the Now album. The first was a masterclass in weaving in and out of minor and major keys, and the second, a lyrical tribute to our troops that tugs at the heartstrings. She sang “Soldier” while suspended in the air, riding on a open acoustic guitar case, floating across the venue to the center stage by the soundboard.

This was a very special moment, and it gave the folks in the back a chance to be “up front” and see her next costume change into a white dress with a ruffled low-cut collar, a sheer black robe, and white boots inspired by ancient Rome. The great songwriting continued with her number one song “You’re Still The One”. She went back up above the crowd with her magic flying guitar case, but this time she took an acoustic along which reminded everyone that she plays guitar too. This performance was beautiful and moving.

Two lucky fans were picked from audience once Twain landed her flying trapeze, and were escorted with her up on stage for some light conversation and a once-in-a-lifetime selfie. This part of the show was a bit awkward, but we were soon back to the music and mischief as the Sun’s gorilla mascot came out and lifted Twain onto the piano as she broke into the song “More Fun”, another song from Now that hints of Beatlesque influences.

An amazing blue laser show filled the arena as the music began for “From This Moment On”. A video of an ever-evolving lotus flower played on the screen, while Twain emoted the lyrics, alone on the stage. It was like the best karaoke version ever without the band on stage, but it would have been even more fantastic if Bryan White would have been there to duet with her — no such luck. Another costume change had her in a glimmering black catsuit with a flowing black overcoat.

That was the end of the slow stuff, and the stage set became more robust as the video cubes would rise and fall and become characters in the show. Lasers and illuminated costumes for the dancers added to the festival of light as Twain belted out “I’m Gonna Getcha Good!”

Swiss singer/songwriter Bastian Baker was the opening act for the show, and Twain invited him back to the stage to sing the duet “Party for Two” with her, and then he stuck around to play guitar on “Swingin’ With My Eyes Closed”.

Twain removed her top layer and strutted around in her catsuit that looked like a superhero outfit and showed off her figure. She turned on the sex appeal with “(If You’re Not In It For Love) I’m Outta Here”, and ended it with a bang of graffiti canons that poured over the audience and left them in suspense for an encore. Panning around the arena, everyone was out of their seats and it didn’t seem they could get any louder…but they did.

Those seven notes that kicked off the anthem for women and lead into the line, “Let’s go girls,” produced 10,000 primal screams from fans. “Man! I Feel Like a Woman!” did not disappoint. This was the last costume change, and it gave an appreciated nod to the video with all-black thigh high boots, long-sleeve gloves, a choker, and of course a short skirt. Like the massive eruption at the end of a fireworks display, this song left no holds barred as the lasers, video screens, dancers, musicians, and Shania Twain left it all out on the stage.