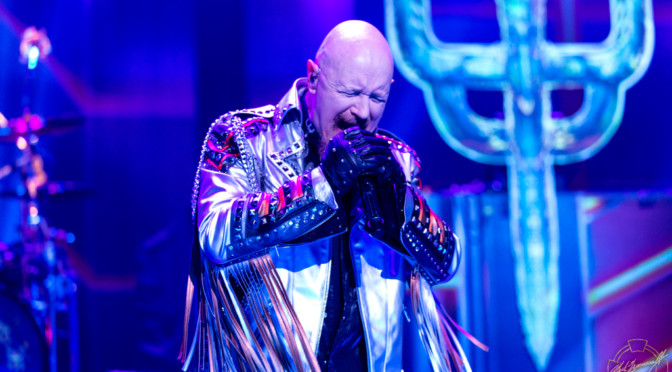 PHOENIX — Heavy metal legends Judas Priest drenched Phoenix fans in a fast-paced scintillation of velvety-strobing lights, squealing guitar riffs and the ear-splitting vocal prowess of leather-clad vicar Rob Halford, whose voice could be heard echoing through the streets of downtown outside Comerica Theatre. Priest announced English heavy metal pioneer Saxon and hard rock group Black Star Riders as openers for the U.S. leg of their 2018 “Firepower World Tour” earlier this year. Saxon is renowned for their influence on archetypal acts like Slayer, Metallica and Mötley Crüe and are noted for selling more than 23 million albums worldwide. Black Star Riders was formed in 2012 as “the next step in the evolution” of hard rock band Thin Lizzy. Their third and most recent album, Heavy Fire

In their announcement, Judas Priest also noted that thrash metal icon Megadeth would step in as the supporting act for the European leg of “Firepower”. As if that wasn’t enough, Judas Priest will also be appearing alongside Ozzy Osbourne on his farewell tour later this summer before co-headlining a tour with the infamous Deep Purple later this year.

explosive energy has shocked Priest fans, skyrocketing it to success and ranking the album at No. 5 on the Billboard 200 chart — the band’s highest-charting album in the United States to date.

With so much musical history under one roof, there were moments where the night truly felt like a spiritual experience. Black Star Riders took the crowd by storm early-on boasting a youthful stage presence, which positively intermingled with Thin Lizzy’s time-honored style.

After a minimal set-change, Saxon followed quickly thereafter, bringing the house down with a mix of heavy-handed hits and highlights from their latest album Thunderbolt

, which was released in February of 2018 under producer Andy Sneap — who also joined Judas Priest on the “Firepower World Tour” to support Glenn Tipton, following Priest’s announcement that Tipton’s unfortunate battle with Parkinson’s had progressed to a level at which he cannot currently tour (Feb. 2018).

Among the audience were obvious diehard fans of all ages, including everything from seriously skilled air-guitarists energetically moving up and down the aisles, to children and families, headbanging all-together beneath an incredible display of vibrant, ever-changing lights which moved in-time to the note of each new song. One little girl, about 4 years old with tiny blonde pigtails, stood atop an empty seat with her father behind her, rocking out with every ounce of movement she had — proving once again that heavy metal music has a timeless quality to it that continues to bring together people of all ages and walks of life, challenging the status quo.

During the night’s first hidden set-change, a curtain displaying an impossible trident waved gently beneath the dimmed lights as red-orange flames swirled in the background. As the opening notes to Priest’s latest title track rumbled out across the crowd, the curtain shot upward to reveal Halford draped in gold from his suit pants to his tassel-adorned jacket. Sneap (Guitarist), Richie Faulkner (Guitarist), Ian Hill (Bassist) and Scott Travis (Percussionist) followed close behind, taking their place on stage among an illusion of pyrotechnic projections which were fitting alongside towering castle-like structures, topped off with a symbolic devil’s tuning fork which mirrored itself across the stage. Halford then transitioned into tracks “Running Wild”, “Grinder”, “Sinner” and “The Ripper” from albums Killing Machine

and Sad Wings of Destiny

before turning attention back on to their latest album for “Lightning Strike” which highlights Firepower’s eclectic mix of classic Judas Priest sound, and something quite a bit different — a savage expansion on Halford’s incredible vocal talent (at 66 years old) also reminiscent of old school Iron Maiden or Motörhead.

Next-up on the night’s setlist were “Bloodstone” (Album: Screaming for Vengeance

), each of which was signaled by a change in Halford’s eclectic collection of hell-bent-for-leather type jackets, each song rivaled by the energy of the last.

Halford stepped center-stage to address the crowd, “Thank you all for for coming out and keeping your heavy metal faith tonight. And thank you for supporting evilness, evilness… Because evil never dies!”

Fans rejoiced in a sea of chants and fist-bumps, singing along to new crowd favorite, “Evil Never Dies” also off Priest’s latest album, before moving onto unbelievable performances of “Some Heads Are Gonna Roll” and the ever-anticipated “You’ve Got Another Thing Comin”, succeeded by an intermittent recording of “The Hellion”, during which Halford and his bandmates momentarily disappeared backstage. Despite having already put on a thrilling hour-plus performance, Priest emerged once more for a staggering finale.

Seconds after the closing notes of “Electric Eye” (also off of Album: Screaming for Vengeance

), Halford shot across the stage on a black-and-chrome chopper while clips from the 1978 track’s music video faded on and offscreen above. Halford passionately belted out the lyrics to“Hell Bent for Leather” from atop the bike, before closing the evening with a powerful performance of “Painkiller”. Halford had one last surprise up his leather-studded sleeve — an earth-shattering encore. Fans were elated to see 70-year-old Tipton take the stage for three ultra-nostalgic and goosebump-worthy renditions of “Metal Gods”, “Breaking the Law”, and “Living After Midnight”.

After completing an astonishing 19-track setlist, it was clear that Halford and his bandmates show no signs of slowing down. Judas Priest proved to their fans once again that even after 40 years, they continue to ignite the fire.