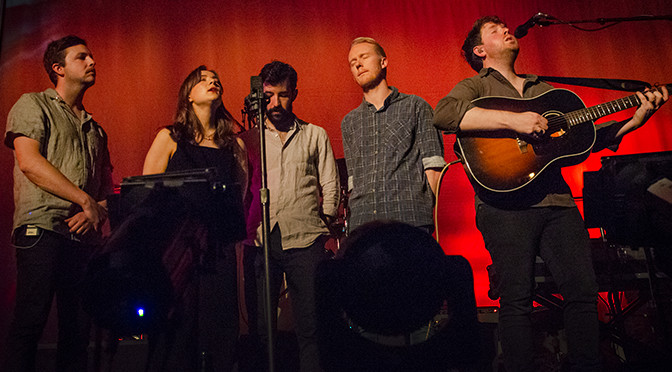 SEATTLE — Like a gentle breeze, The Paper Kites brought in a soothing and refreshing performance to Neptune Theatre, accompanied by special guest Harrison Storm. Purely cathartic, The Paper Kites’ dreamy indie/folk rock music serves as a lullaby, the stitches that mend broken lovers, escapism for the weary and hopeless.

Held in a historic theatre with ornate Renaissance-influenced architecture and folding chairs, there seemed to be some ambiguity as to whether the crowd should handle themselves formally or casually, whether they should keep silent in reverence or cheer, sit or stand. Singer-songwriter Harrison Storm helped assure the audience that they had permission to applaud, although the presence of chairs still persuaded all to stay planted in their seats for most of the night.

Storm was a good lead-in for The Paper Kites, with a personal and minimalist style. He will be parting ways with the band following their September 20th show in San Luis Obispo, and embarking on a headlining tour in the UK and Europe beginning on October 11.

Being a performing arts venue, Neptune Theatre didn’t have overhead lighting directed toward the band, and the lights on the edge of the stage were low, leaving The Paper Kites mostly backlit. This lent itself to the midnight mood of their music, and also often illuminated drummer Josh Bentley and bassist and synthist Sam Rasmussen more than the others.

Sometimes the combination of blue and magenta lights resembled the neon sign on the cover of twelvefour, creating an even deeper sense of immersion.

The lone woman of the group, keyboardist and guitarist Christina Lacy, has a humble stage presence despite the prominence of her vocals within the harmonies in their songs. On this night, her entrancing vocals, along with those of Dave Powys, were nearly as soft as a whisper.

Powys entranced onlookers when he played the lap steel, an instrument that many had undoubtedly never seen.

Frontman Sam Bentley brings authenticity to the stage, sharing endearing stories that brought some levity, and visibly drawing on his emotions as he sang verses and held notes like a long, slow yoga exhale. Seeming to channel a trance-like state, each musician in the five-piece band performed with otherworldly control and subtlety.

We often like to impose our own lives onto the music we listen to, giving it particular relevance to ourselves, but it was interesting to hear some of the tales behind the songwriting that Bentley shared that night. The meaning behind the lyrics is often so much more interesting and creative than what you would assume. Some of the best parts of the show were a couple of times when every member of the band came together to sing into a single microphone. One of the most shining moments for Bentley’s vocals was the climax of “Give Me Your Fire, Give Me Your Rain” off of On the Corner Where You Live — the second of a two-part album release in 2018. They closed out the night with all five  on a guitar (incl. bass) for “Standing in the Rain” from the first 2018 release On the Train Ride Home. Including the encore, The Paper Kites performed a 16-song setlist.

Beginning in British Columbia, this was the second stop on The Paper Kites’ 2019 fall tour that will be traveling down the United States and passing over Phoenix, Arizona  — home of Burning Hot Events. They will be making stops in the south, working their way north up the eastern seaboard, visiting the Midwest, and heading back up to play their last date in Alberta. In 2018, they toured in support of their two releases that year. The 2018 fall tour was concentrated primarily in California, Canada, and the northeastern US, so Phoenix wasn’t privy to this tour either, whereas Seattle had the privilege of being slated for both tours. However, Seattle holds a special place in their hearts, being that it was a location they ventured to in 2015 to record the one and only twelvefour. On this night at Neptune Theatre, Bentley called Seattle a “second home”.

It seems that Arizona was last graced with their presence in 2017 when they performed at Club Congress in Tucson. Since they have performed in landmark venues such as Club Congress, Seattle’s Neptune Theatre, and San Francisco’s The Fillmore, perhaps one day they will be hosted by The Van Buren in Phoenix — converted from a historic vintage auto dealership. Good luck Phoenix… You could use a chill night like this.

The Paper Kites tour dates can be found here.