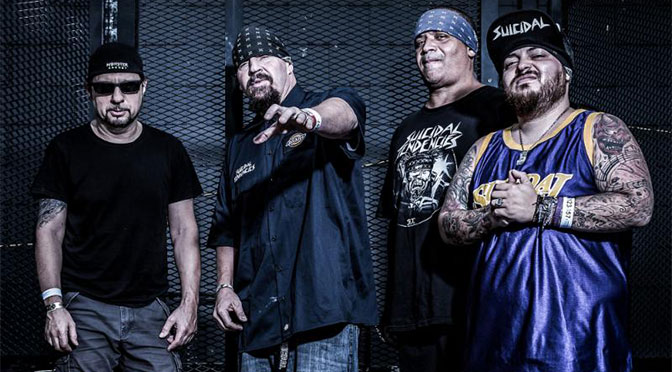 Heavy music legends Suicidal Tendencies recently announced the upcoming release of their latest album, STill Cyco Punk After All These Years, out September 7, 2018. STill Cyco Punk After All These Years is a re-recording and re-imagining of a Cyco Miko (Mike Muir) solo album recorded in 1995, originally entitled Lost my Brain! (Once Again). The album is an auditory time capsule – a full-on Cyco Punk record taken to a whole new level – featuring legendary drummer Dave Lombardo brutally beating the songs and sound that is made to get your slam on.

Vocalist Mike Muir‘s relationship with Converse started long before Suicidal Tendencies. “When I was young, I still remember getting my first pair of ‘Chucks’ for my birthday and how stoked I was to wear them to school the next day,” says Muir, reflecting on the iconic sneaker. “It was almost like a rite of passage, the beautiful thing about them is whatever ‘direction’ you were headed, you could go there with your Chucks.

“All these years later, Converse has the same meaning to me,” adds Mike Muir. “Just as young Mike will never forget putting on his first pair of Chucks, I can’t wait to relive that amazing feeling with the new Converse x Suicidal Tendencies, a massively proud moment for the band, our fans and of course me personally!”

Listen to two re-imagined tracks from
“STill Cyco Punk After All These Years” here:

STill Cyco Punk After All These Years will be available in digital, CD, opaque purple vinyl (with download card) and opaque gold vinyl (with download card, patch and poster) formats. All merch and physical formats can be pre-ordered via the official webstore, and digital formats can be pre-ordered via iTunes and Amazon. You can also pre-save the album via Spotify, Apple Music and Deezer here.

“STill Cyco Punk After All These Years” Track Listing:

New Album, “STill Cyco Punk After All These Years”,
out September 7, 2018
Pre-Order:

Suicidal Tendencies will perform in several cities this coming September and October. See below for all confirmed performance dates: