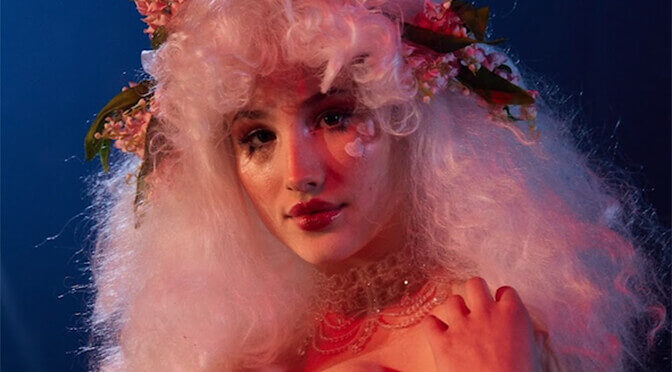 Milwaukee-based art-pop artist Valerie Lighthart is debuting a new self-directed music video for her latest single “Love & Money,” which includes a featured spot from queer Latinx pop artist Solana. The video was directed by Lighthart herself and also features a cameo by drag-queen Melee Mcqueen.

“Love & Money” is a pop-romp created to celebrate femininity and reclaim the ideals women and femme-identifying folks are vilified for -vanity, yearning for love, and self-interest. Valerie has created a safe space wherein femmes could express those traits euphorically, harkening back to the circles that witches danced around naked in the early American wilderness. Worshiping evil ideals, loving themselves wildly, and exuding power.

“I yearned to create a gilded realm to escape inside. I sought and found safe spaces to unpack the difficult feelings I had about womanhood, femininity, sexuality, and autonomy. As a young teenager, a dance class I took with my older sister helped me begin to unravel the complicated web of internalized misogyny I learned. It taught me to connect to my body in a new way and learn to embrace my thoughts and desires in a group of supportive femmes. We would spin in circles, laughing and talking. We showered love on each other, and the tone of acceptance, body positivity, and optimism was freeing. Through this joyful space, I grew the stability of identity to unpack my ideas on femininity, and analyze the shame that had it in a stranglehold. Women and femmes don’t have a monopoly on shame, but I felt empowered to think about what I knew best: feminine performance in relation to a hyper-sexed and shame-based culture,” says Valerie.

Having designed the set and coordinated the costumes to harken back to the restrictive and debauched 18th century, Valerie’s music video opens up the stage to include femme folks who’s artistic flair, drive, force, and ownership of their autonomy she deeply admires.

“Whilst celebrating this ambition in “Love & Money“, I also explore why these materialistic and capitalist desires are even important, by creating this over-the-top alter-ego. I think it’s fun to ask questions from a first-person perspective, and through this song, I was able to do a bit of soul searching and exploration of the femme experience in our society, the roles we’re encouraged to assume, and the spectrum of desires and goals we have and why we have them. Ultimately this project is about shining light on multi-dimensionality as an intrinsic part of femme nature,“ says Solana.

“Surging eccentrically out of Milwaukee, WI is the glorious curiosity that goes by the name of Valerie Lighthart. At just 22 years of age, the cultural polymath has already dabbled in filmmaking, poetry, acting, modeling– and of course… her true raison d’être, making music. But with her new single, it might be said that she has also crossed over into feminist philosophy.” – Black Book

Imbibed with the different flavors of visual and sonic characterization, Valerie Lighthart is a pop songstress that tempers fun melodies with a sense of something a few shades darker -punctuations of melancholy and unique stories centered around folklore, empowerment, travel, or personal trials. In some tracks, she embraces her personal identity and in some she subverts it altogether, creating an entirely new character in which to enact her ideas. Yearning to create a larger-than-life feeling of mythology within her new work, she is diving fully into chamber pop-inspired dance songs and floating through soundscapes of ambient and longing folk croons.

“Love & Money” is the introduction to the “By Moonlight” series, a careful cultivation of the opposing worlds of pop and folk to tell a story about the historical positionings of women. Different elements held within the trio of EPs intend to empower, awaken, question, and introspect. Her vehicle is the shining moon, eternal in her orbit, the fluttering tulle skirts of femme goddesses shaking the leaves from the trees, the monsters braying past the moonbeams in the darkness, and the murky waters of outcry and confusion. The lyrics are feminist, subversive, analytical, romantic, and lofty. The “By Moonlight” series is a trio of EPs, each in a different sub-genre, intended to analyze a different facet of femme existence: empowerment, transformation, performativism, sexuality, oppression, and rage

The project, set to release in installments over the next year, is a collaboration with N43 Records, a Midwest-based independent label empowering diverse voices.