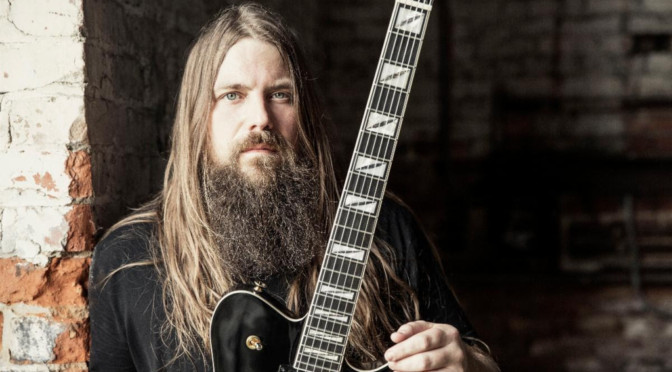 As with Morton’s solo debut, Anesthetic, released earlier this year, the guitarist enlisted the talents of various musicians and vocalists to bring his songs to life. Ether features appearances by Lzzy Hale (Halestorm), Howard Jones (Killswitch Engage, Light the Torch), John Carbone (Moon Tooth) and Mark Morales (Sons of Texas), who is also a member of Morton’s live band. The EP is made up of three original songs and two covers that once again showcase Morton’s diversity as a musician.

Says Mark Morton, “I’m thrilled to announce the upcoming release of my new, five song EP, ‘Ether,‘ on Rise Records! Once again, I’ve had the great pleasure of working with some amazingly talented artists and friends to assemble this collection of tunes, all of which feature a strong acoustic guitar component. Inspired by the acoustic sets I had the opportunity to perform last spring and summer in support of ‘Anesthetic,‘ I began writing some new songs to reflect that more mellow vibe. I’m stoked with the results and I can’t wait for everyone to hear what we’ve been putting together. I’ll be debuting these tunes on my upcoming U.K. acoustic tour, so you can hear them live before they’re released anywhere else!”

“I continue to be honored to have the chance to work with so many incredibly talented people and I remain beyond grateful to the fans that have come along with me and supported these projects. Thanks so much everyone!”

First single from Ether, “All I Had to Lose” featuring Mark Morales, will be released January 10.

Ether was produced and mixed by Josh Wilbur (Lamb of God, Gojira, Trivium).

Following his first UK acoustic performance at the Download festival earlier this year, Mark Morton will return for a handful of special and intimate acoustic shows in January 2020.

Mark Morton comments, “We had such an amazing time with the acoustic set at Download and I’m really looking forward to expanding on that experience with these upcoming shows. Joining me once again will be Mark Morales on vocals and guitarist extraordinaire, Joe Harvatt. I can’t wait to make each show extra special for you all with an evening of stories, acoustic versions of many of the songs from Anesthetic, and a few covers of some of our favorite tunes. We’ll also be debuting some new original material as well! Look forward to seeing you all!”