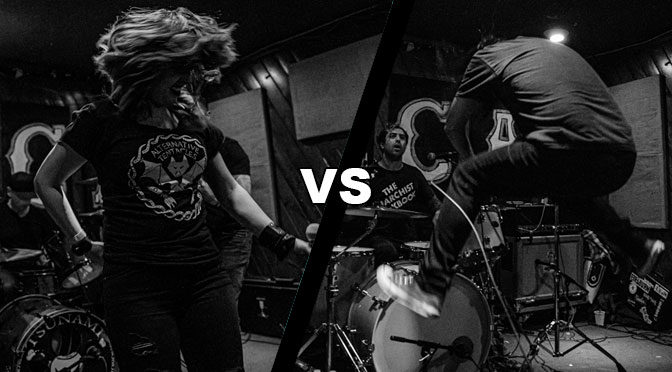 Tempe, AZ — Near the geographic heart of Tempe sits an ancient strip mall, a dinosaur of a building that time seems to have forgotten. On the Eastern end of that building is a sign that simply says “Hu’s Yucca Tap Room.” Below that sits two sets of doors. The doors to the left take you into a bar where the walls are green, the paneling is wood, and the president is Nixon. The doors to the right take you into one of the most legendary live music venues in all of Phoenix. It could be considered sacred ground of sorts — a place where the music scene flourished and where thousands of shows have been held. On this night, 4 punk bands were scheduled to perform — Tsunami Bomb, Death by Stereo, Toxic Energy, and The Venomous Pinks.

There is a certain charm that the Yucca has. It will never win awards for the most beautiful venue in Phoenix, but that’s ok because it doesn’t need to. There is a level of access to the band that does not exist in every venue — no barrier between the crowd and the stage: As the band loads their equipment onto the stage, they must pass through the area where the audience stands, walk up four steps at the front, and work on setting up only feet away from those waiting in anticipation for the upcoming set. There is an intimacy that is taken for granted; a closeness that could feel claustrophobic if one allowed it to. On full display is the part of the grind that the general public rarely considers, much less sees. The band — and anyone helping them — must set up the stage, transporting the equipment from a parking lot and then back out after the last note is played; a labor of love that is rarely recognized as such by many.

The Venomous Pinks started the night off with a bang. They were the only Arizona band playing that night, and are also one of the very few Arizona bands that are comprised entirely of women. They are massively talented and extremely underrated, a diamond in the rough. Comprised of Drea Doll, who is the lead vocalist and guitar, Gaby Kaos on the bass, and Cassie Jalilie on the drums, they started the show off with “Never Say Never,” from their EP Exes & Whoas!, released in 2014. They immediately kicked the energy level up to 10, getting the crowd energized and set the tone for quite a show.

Halfway through the set, Doll and Kaos talked about the music video they had just shot for their newest single “I Want You,” which is also the name of their newest album. They admitted they were a bit nervous while shooting it, but they were pleased with the overall result. The song is a cover, originally done by Joan Jett & The Blackhearts, and they nailed it in no small part due to the fact that Drea Doll has a voice that is reminiscent of Jett herself.

To say The Venomous Pinks are fun would be an understatement. They are loud, in your face, and incredibly talented. They are opening for the Adicts on 2/11/20 at the Marquee Theatre — a show that promises to be one of the best of the year. Even if you cannot make that show, follow them on social media and catch them at an upcoming show.

The next band up was one from Orange County — one of the three bands carrying on the long tradition of Southern California punk. Toxic Energy is normally a five-piece band, but tonight their usual drummer had the flu and could not join them. Chris McBride, normally on the guitar, filled in and put on a clinic on the drum kit. Lead singer Greg Dickson — flanked by guitarist Brent Waterworth and bassist Brian Jones — started the set off by expressing gratitude to the fans, to the Yucca Taproom, and to all of the other bands playing that night.

That was the calmest moment of the set. As soon as he finished speaking, the music and mosh pit started. Dickson prowled the stage, seemingly trying to make eye contact with each and every audience member. He sings not with just his mouth, but his entire body. It would be hard not to feel a bit tired for him watching the performance, but it would also be very hard not to dive into a mosh pit and get to know your neighbors a bit better. At the risk of overusing this term, this band truly is a must-see.

As the set ended, Dickson and his bandmates gathered at the edge of the stage to take a photo of the crowd and thank everyone for coming. Dickson shook the hand of every person who was by the stage, thanking each of them personally. It is a bit of an enjoyable juxtaposition: one moment you are being sonically assaulted by a bone-jarringly loud, hyperactive front man, the next he is shaking your hand and quietly thanking you for the support.

As Death by Stereo set up, they joked with members of the audience, bantering with people they recognized from previous shows. Death by Stereo is made up of guitarists Dan Palmer and JP Gericke, bassist Robert Madrigal and drummer Mike Cambra, with founder Efrem Schulz as the lead vocalist. They were laid back, easy-going, and then the music started and the Yucca felt like the Tardis — far bigger on the inside, expanding due to the frenetic, explosive, incredible wall of sound that Death by Stereo provides. You do not listen to this band; rather, you experience them. The mosh pit was churning, heads were banging, and the band could have powered a small town with their outpouring of energy.

Mid-show, Schulz mentioned that Death by Stereo was formed 21 years ago. He also talked about his love for the Yucca, exhorting the exuberant crowd to keep going to venues like this, to keep the punk music scene alive. It was an over the top, incredible performance, punctuated by Schulz jumping on top of the bar, running to the sound booth and then into the crowd. It should also be noted that he did all of this with a wired microphone, leading to an unspoken team effort of the crowd holding the cord over their heads, as if it was crowd surfing. Seemingly as quickly as it started, the set ended, and much of the crowd moved outside to cool down a bit before Tsunami Bomb took the stage to close the night out.

Tsunami Bomb formed in 1998, at about the same time Death By Stereo did, but they took a 10 year break before reforming in 2015. They came back with a new lead singer, Kate Jacobi, who jumped right in, joining bassist Dom Davi, keyboardist Oob Sparks, drummer Gabe Lindeman, and guitarist Andrew Pohl. Sparks was unable to join the band for this tour, something that Jacobi told the crowd early on, leading to chants of “We love Oob!” at the conclusion of one of the songs.

Tsunami Bomb was a bit of a welcome slowdown after Death by Stereo, though slowdown is a bit of a relative term. There were moments where it was obvious that they missed Sparks, but they powered through, delivering a solid set to an adoring crowd behind Jacobi’s incredible vocals. Toward the end of the set, Jacobi was handed a shoe that someone had lost in the mosh pit, followed by a phone. Fortunately, both owners were quickly found, though it was never explained how someone didn’t notice they had lost a shoe, and, after a couple more songs, the show drew to an end. Before leaving the stage, they, like the bands before them, expressed gratitude for all involved – the venue, the other bands, and most importantly, the fans.

The night ended, reluctantly it seemed, and the stage was cleared once again. The bands lingered outside, not ready to leave, not quite yet. There were the fans to talk to — the ones who stopped to thank them for an incredible show, the ones who would be back the next time they were in town, and the ones who will help keep this incredible music scene alive in Phoenix.