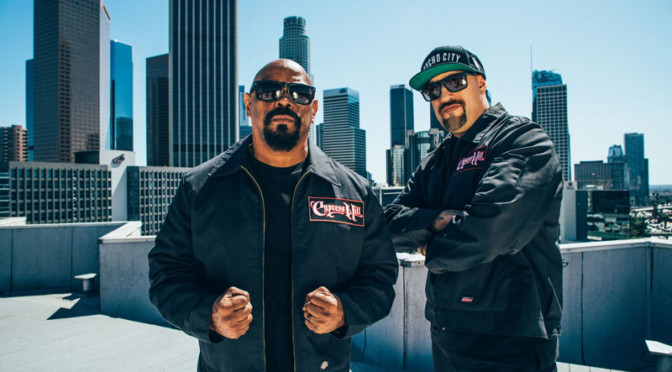 Los Angeles, CA – Multi-platinum hip-hop group, Cypress Hill, is pleased to announce the release of their highly-anticipated ninth studio album, Elephants on Acid, on September 28th. Elephants on Acid is the band’s first full-length record in eight years and marks their newly inked partnership with BMG. The album is available for pre-order HERE starting today.

With DJ Muggs at the helm, Elephants on Acid is the first record he produced since 2004’s Til Death Do Us Part. After reuniting with B-Real and Sen Dog in Los Angeles, Muggs traveled across the world to collect the vibe and sounds that make up much of what you’ll hear from start to finish on the 21-track-interlude mix. Cypress Hill takes the listener on a musical journey, starting from the alleyways of Cairo on “Band of Gypsies” – which features live instrumentation from Egyptian street musicians – to the mystical vibes of Joshua Tree where Gonja Sufi lays down some cannabis-infused flow on “Jesus Was a Stoner” and “Blood on my Hands Again.” The band then returns to their native streets of Los Angeles on “Crazy,” a woozy waltz that bubbles underneath rhyme fireworks and an intoxicatingly irresistible hook. The latter is vintage Cypress Hill and also includes the soulful guest vocals of Brevi Wood. Additional standout tracks from B-Real and Sen Dog include “Warlord” and “Put Em In The Ground” – both are sure to bring fans the classic sound they love with a 2018 twist. The accompanying video to “Band of Gypsies” is also out today, which fans can watch HERE.

“Psychedelic rock and stuff has been a big influence on me,” Muggs tells Rolling Stone. “I’ve been listening to it since it was in my mother’s and my uncle’s collection. … I had the idea what the name of this record was going to be and then I just started building the whole sound around [it]. Just a whole sound like feeling like you’re high on hallucinogenic drugs – but you’re not on no drugs.”

In celebration of Elephants on Acid, Cypress Hill will embark on an extensive global headline tour throughout the fall and winter. After performances at Riot Fest (Chicago, IL) and The Great American Smokeout (Ontario, Canada), the group will head out on a massive run of dates across South America, Mexico, and Europe, hitting notable cities including Rio De Janeiro, London, Paris, Berlin, and Amsterdam.

Cypress Hill is also excited to play their annual Haunted Hill shows this fall. The band will first hit Los Angeles with a performance at the El Rey on October 25th, followed by a slot at The Roxy the following night. They’ll then return to New York to headline the Gramercy Theatre on October 31st and Warsaw on November 2nd. A full list of tour dates can be found below, with tickets available to purchase HERE.

Three decades ago, B-Real, Sen Dog, and DJ Muggs sparked a trip that left popular culture stoned, stunned, and staggering in anticipation for more. Naming themselves after a local street in Los Angeles, Cypress Hill burst on the scene in 1991 with the release of their self-titled debut album. The singles “How I Could Just Kill a Man” and “The Phuncky Feel One” became underground hits, and the group’s public pro-marijuana stance earned them many fans among the alternative rock community. Cypress Hill followed their debut with Black Sunday in the summer of 1993, which debuted at #1 on Billboard’s Top 200 and went triple platinum in the U.S. As a result, Cypress Hill became the first rap group to have two albums in the top 10 of the Billboard 200 charts at the same time. Cypress Hill went on to release six more records and have sold over 18 million copies worldwide, becoming the first Latino-American hip-hop group to achieve platinum and multi-platinum success. The band has also been immortalized by a star on the Hollywood Walk of Fame (coming in 2019), getting animated for an episode of The Simpsons, and earning a spot on VH1’s “100 Greatest Songs of Hip Hop” with smash single “Insane in the Brain.” Additionally, Cypress Hill has been sampled by everyone from JAY-Z and The Black Eyed Peas, to A$AP Rocky and Vic Mensa with Chance the Rapper.