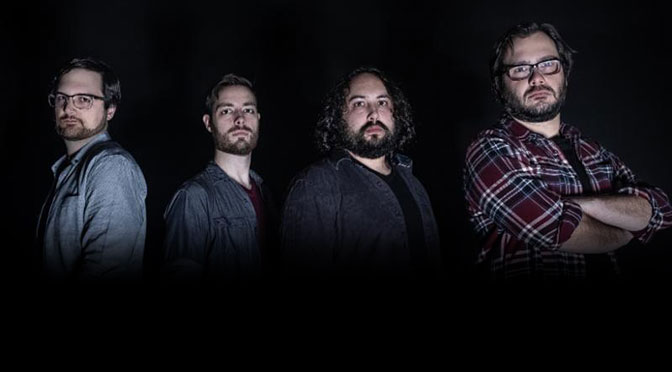 New York-based progressive metal fusion quartet Valence recently announced the release of their upcoming album, Cognitive Dissidents, out April 12, 2019. Expertly fusing genres like metal, rock, jam, classical, jazz, and more, Valence‘s varied, yet cohesive, influences offer every listener a passport to a new state of mind that is cerebral and emotive, while not sacrificing accessibility.

Today, Valence have revealed a third new track from Cognitive Dissidents, entitled “Walrus“, which is available to stream via New Noise Magazine HERE.

Guitarist Geoffrey Schaefer says about the track: “‘Walrus‘ is one of the more eclectic songs on Cognitive Dissidents that really highlights the way we incorporate jam band influences in with the progressive metal. You can really hear this about two and a half minutes into the song, as well as with the section that comes about five minutes in. It’s also one of the longer songs on the album, but one that we don’t think feels long.”

Check out other videos featuring tracks from Cognitive Dissidents :

Cognitive Dissidents, the ambitious follow up to their Independent Music Award-winning 2014 EP, Laser Baron, was recorded and produced at Westfall Studios in Long Island, NY.

Valence wastes no time in launching Cognitive Dissidents intro the stratosphere with lead single “Damnit, Lana!” (linked above), setting the course for what is about to be one hell of a ride. Rock technicality blends into a seductive Latin fusion-inspiredsection driven by multi-talented percussionist Chris Romano, only to finish as an unrelenting metal opus. “II. Calmer Than You Are” shows the softer side of Valence, illustrating a synth-laden soundscape led by bassist Wilhelmus Sapanaro. The band continue to flex their tech-muscles on tracks like “III. Preferred Nomenclature“, in which guitarists Michael Buonanno and Geoffrey Schaefer burn through over five minutes of deft ebb and flow – fluxing between absolute mano-a-mano, battle-like shreddery, deep grooves and classically-influenced passages. “Walrus“, amid its journey, provides an unexpected mid-track jam trip before the album closes with “Red Sky at Morning” – a 14+ minute sonic escapade that can only be described as positively monumental.

1. Damnit, Lana!
2. Prelude: Parlance of Our Time
3. I. If You’re Not into the Whole Brevity Thing
4. II. Calmer Than You Are
5. III. Preferred Nomenclature
6. Walrus
7. Red Sky at Morning

Valence has performed across the eastern United States and Canada with artists like Scale The Summit, Sarah Longfield, Consider The Source, Felix Martin and more, and will soon expand their national footprint later in 2019. In the meantime, Valence has several U.S. performances booked this winter and spring. See below for all confirmed tour dates:

Visit this Facebook event for a listing of these shows.

“…Valence is a style unto themselves, and listening to them is more about a direct connection to the moment than a study of any genre.”
– William Berger, Author, Wagner Without Fear et al.;
Producer and Commentator, the Metropolitan Opera

“Ever watch a band enjoy themselves so much while playing live, that their mood becomes Infectious? It’s literally impossible not to smile while these dudes are having the best time on stage. It also helps that they can all super shred on their instruments too.”
– Metal Injection

“If you love some of the acrobatic, complex, and heavy material of current acts like Scale the Summit, Between the Buried and Me and Animals as Leaders, this is a band you need to check out.”
– Sea of Tranquility

“When we hear prog, we actually expect the music to suck hard like a mouthful of coarse-grade sandpaper, because we know it’s a clever ruse. It’s a way for many failed musicians to pretend they have relevance. Valence, however, have given us more to expect out of this “prog” thing…”
– Deaf Sparrow