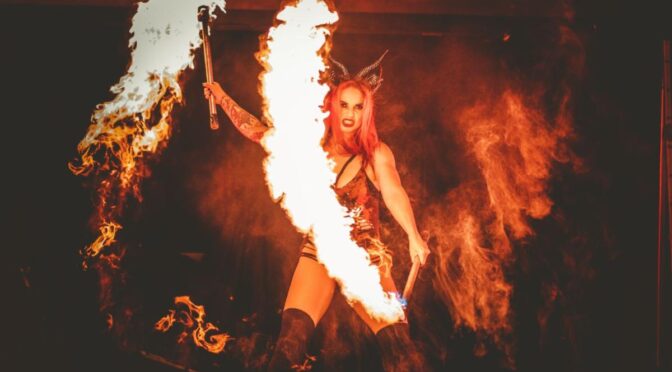 Alicia Taylor shares, “We are beyond thrilled to be invited to perform at Louder Than Life and Aftershock in 2022! It feels incredible to be accepted alongside the incredible bands that are on the bill and solidifies that there IS a place for us in the world of rock and metal. We are carving out our own unique path and are eternally grateful to those like Danny Wimmer and team for seeing something in us.”

Corey Taylor adds, “Everybody has their favorite tours. I have been very fortunate to have been a part of so many over the years. To not only be able to tour with my wife, but also to know that they are putting on an amazing show as well, I can maybe think of a handful of people who can say that. Get ready for a rad time!”

Tune in now:
Girl Gang Season 4 – premiered March 9th on YouTube.
Follow the Cherry Bombs, one of the first groups to tour during the pandemic. Watch here how they face the obstacles and achieve success!

Alicia Taylor explains “When Corey Taylor and I started putting together our tour during 2021, we were one of the first acts in our genre to accomplish this during the pandemic. We wanted to do it right, by reducing as many risks as possible- to not only prove to ourselves, but to our industry, that perhaps there is a way to adapt and make shows happen. We covered as many bases as possible: temperature checks, consistent testing on the road, reduced capacity at shows, requiring masks, we stayed in a bubble- we really wanted to make this tour a success. Girl Gang 4 is all about that tour, and the process behind making it happen.”

2019 saw the premiere of the YouTube docu-series titled, “Girl Gang”, which pulled the curtain back to reveal what it takes to put on such a unique show. The series has been met with overwhelmingly positive reception for its raw storytelling and willingness of the performers to show vulnerability. Episodes focus on the inner-workings of Cherry Bombs, including the adventures, challenges, and triumphs they experience.

Like many in the industry, the pandemic of 2020 forced Cherry Bombs to cancel their tour. However, they adapted quickly, and filmed their headlining show, Macabarét – a story of karma wrapped in temptation, action, and danger around every corner. This “eyegasm” of a movie was streamed worldwide and met with rave reviews, cementing it to become an annual event every October.

Cutting their teeth in the world of motorcycle rallies, they soon climbed the ranks of live entertainment by being the first group of its kind to bag a national tour with Buckcherry and Black Stone Cherry in 2016. Since then, Cherry Bombs have appeared in performances and tours nationally and internationally (Stone Sour/Steel Panther, Corey Taylor, KNOTFEST Mexico, ForceFest Mexico, KNOTFEST Colombia), on television (AEW), and in numerous music videos (Corey Taylor, 21 Savage, Fozzy, Moonshine Bandits).