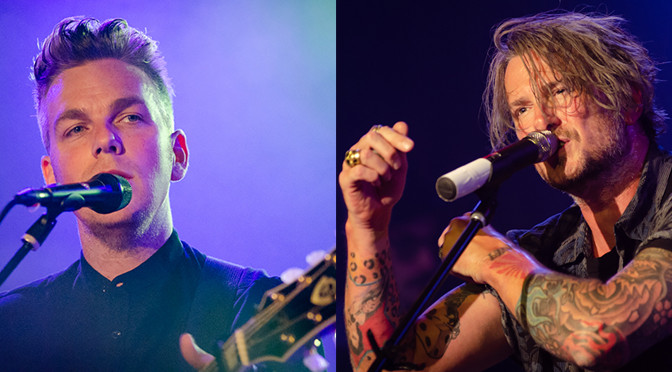 PHOENIX — While Journey and Def Leppard were “on fire” at Talking Stick Resort Arena, Butch Walker and opener Greg Holden ignited their own explosive show at Crescent Ballroom just a little more than a mile away. As is often the case, Phoenix was the tour kickoff location of Walker and Holden’s tour, and they would thereafter embark on the 17-date “The Last Days of Summer Tour” (2018). While some dedicated fans had even flown in from out of state to see the show, no one was prepared for just how hype this show would get; apparently not even Walker himself, who likened coming out to perform again like getting back into your old prom clothes.

Greg Holden, who recently interviewed with us prior to the concert date, performed at acoustic set, which as you would expect, was chill and low-key. But while Holden generally presents a fairly serious demeanor overall, he cracked a number of smiles while engaging with the vocal crowd, and joking during stage banter.

Of course, many fans recognized his “claim to fame”; the infectious hit song “Home”, written by Holden and chosen by American Idol finalist Phillip Phillips. Solidarity and warmth were felt with a strong cheer from the audience as he reached the end of the heart-wrenching song “Boys in the Street”, about the strained relationship between a father and his gay son, and finally growing to acceptance.

Holden’s “On the Run” was actually produced by headliner Butch Walker, who has an impressive list of work as a producer; including the likes of Katy Perry, Panic! At The Disco, Weezer, Pink, Fall Out Boy, The Maine, and many more.

Anyone unfamiliar with Butch Walker was in for quite a surprise when he and his live band took the stage, as the shift in energy was immediate and palpable. Walker is not a country artist. Despite a name that might suggest as much, and Butch Walker’s charming southern roots poking through his stage presence, the more dominant and effortless image and energy he exhibited conveyed his background of a music career in glam metal (SouthGang) and pop punk/post-grunge (Marvelous 3). Walker has 8 studio albums under his belt — the most recent being Stay Gold

The 48-year-old, who shared his age with the crowd himself, seemed almost surprised, and definitely pumped, that as the night went on, his solid and seasoned musical prowess had no problem kicking into high gear. Not to be taken for granted or uncredited, Walker’s live band matched his enthusiasm and skill perfectly as they danced and jammed with a fury.

As his set was coming to a close, his performance climaxed after a medley of magnificent covers of David Bowie that couldn’t have felt like more of a worthy tribute, which segued into Walker’s “Hot Girls in Good Moods”. With his shining sense of humor, he began a drawn-out activity amidst the crowd that built anticipation and inspired nearly all, save for the wallflowers on the bleachers in the back of the venue, to participate and, “GO CRAZY!” Confetti and streamers popped out over the thrilled concertgoers.

The duality between Walker and Holden’s performances indeed complemented each other perfectly, and the show was unforgettably dynamic and downright mind-blowing. We highly recommend picking yourself up and heading out to this show in a city near you, because it is so worth it.