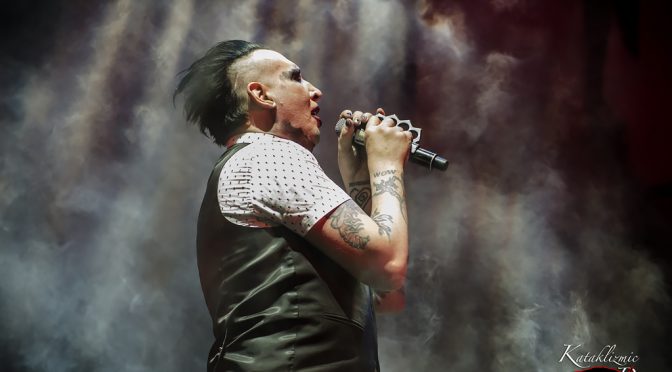 PHOENIX — There’s nothing quite like seeing a show at an outdoor venue in the middle of Arizona’s monsoon season. Preceded by a torrential downpour and accompanying thunder and lightning, Marilyn Manson played at Ak-Chin Pavilion on Saturday, August 20, opening for headliner Slipknot.

The deluge started shortly after metalcore band Of Mice & Men took the stage to get the show rolling. Fans seated in the lawn area at the back of the venue probably weren’t expecting to need a towel, nor did they care. Front man Austin Carlile incited the crowd to cheers and shouts as the rain fell harder.

However, after Of Mice & Men finished their set, the show took a disappointing turn. An announcement came over the pavilion loudspeakers asking concert-goers to exit the venue and seek shelter. Due to the presence of rain and lightning, the show was being postponed until the storm passed. The announcement, unsurprisingly, was met with boos and fans chanting “Fuck that shit,” later changing their chants to “Rain or shine.”

It’s not surprising that concert-goers were disappointed. The show had already been postponed by more than a month due to Corey Taylor’s unexpected surgery after the Slipknot vocalist broke his neck without realizing it.

Many of the people in the back lawn left the venue or waited in their cars for the storm to pass. Others crowded into the walkways and stairways under the pavilion to take shelter. It wasn’t until just after 8 p.m. that the loudspeaker finally announced that the worst of the storm had passed and the show would go on. Fans filed back onto the lawn and into their seats in droves after waiting nearly one and a half hours for Manson’s set to begin.

With curtains up, “Bitch Better Have My Money” by Rihanna played over the speakers. Then when the curtains dropped, Manson was standing on the stage in a suit and tie, wearing his iconic gothic makeup. He opened the show with “Angel with the Scabbed Wings” from his 1996 album Antichrist Superstar.

“Technically, I may have caused that,” Manson joked about the rain. “You guys fucked with a fucking thunderstorm to be here. Thank you,” he said after playing “Disposable Teens.” “How many times does it rain in Phoenix? I’m just saying,” he continued. “Sometimes when you bring the sun, you get caught in the thunder.”

Manson followed up “Disposable Teens” with “No Reflection.” Then after joking that he was glad he was able to make the rain stop, he sang part of the chorus to David Bowie’s “Moonage Daydream.” Manson, who is an avid fan of Bowie’s music, wrote a touching tribute to the iconic singer songwriter for Rolling Stone after the announcement of Bowie’s death earlier this year.

Manson then sang “mOBSCENE” from his 2003 album The Golden Age of Grotesque, followed by “Cupid Carries a Gun” from his latest album, The Pale Emperor, singing the lyrics “pound me the witch drums” as he pounded his mic on the stage. “I’m sorry to make you all wait,” Manson told concert-goers, referencing the lightening again. “But now we can all say what we wanted to say—we love hate,” he said as he launched into “Irresponsible Hate Anthem.”

“Do that again,” he told drummer Gil Sharone, making him re-play the drum solo at the very end of “Irresponsible Hate Anthem.” “I know. I know. Cocaine is a powerful drug,” he said before playing “The Dope Show,” changing the lyrics to, “drugs, they say, are made in fucking Phoenix.” Afterward, Manson came back on the stage in stilts and arm braces to sing his cover of “Sweet Dreams (Are Made of This).”

The highlight of the performance came when a huge podium was added to the stage during a set change. Manson stepped up to it and began his sermon. “And behold, there was a great red dragon, and its name was Phoenix,” he preached before launching into “Antichrist Superstar.” During the song, he set a Bible on fire before tossing it aside, with huge plumes of hell-lit smoke bursting from the front of the stage every time he screamed “Repent!”

Manson wound down the show with an emotional performance of “Coma White”—one of the most controversial tracks off the Mechanical Animals album—ending the song by letting the mic fall over as he stepped back off the stage. Then he wrapped it up with, perhaps his most well-known song, “The Beautiful People.”

By the time the show ended, the night skies were clear and not a drop of rain was falling. No rain checks required.