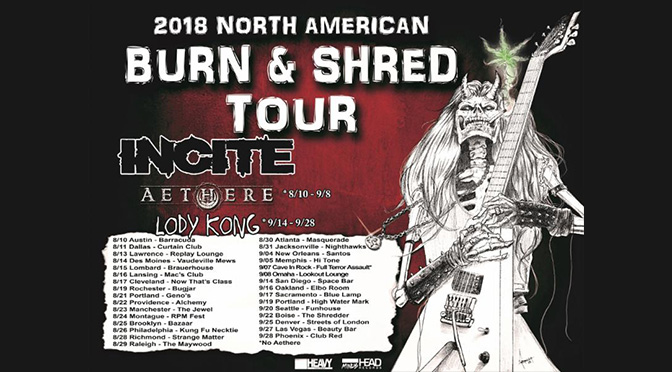 Heavy metal purveyors INCITE will kick off their North American “Burn & Shred” headline tour, featuring support from Aethere (8/10-9/8) and Lody Kong (9/14-9/28), next Friday, August 10! Catch them at a venue near you.

This tour is coming to your state!

See below for all confirmed dates:

Vocalist Richie Cavalera says, “We’re fired up to be hitting every corner of North America on what will be our most extensive headline tour yet! Bringing the metal with us will be Aethere and Lody Kong, so come rage with us. You might even hear a new song or two! Keep it heavy and get ready to “Burn & Shred“!

INCITE also just finished the recording process on their next full-length album, which is set to be released soon. Fans should stay tuned for more information on the impending release. Cavalera says, “The new album is a wrap! It’s all about keeping it brutal for all the metalheads. We’ve got an album full of ragers – it’s definitely heavy as sh*t with some new surprises in the guitar shredding department, and our special guest vocalists – which you’ll hear about soon – killed it. We’re pumped to release this album to the world.”

INCITE‘s most recent album, Oppression, is available now via iTunes, Amazon or Bandcamp.

Over the years, INCITE has toured alongside the likes of Dillinger Escape Plan, DevilDriver, Crowbar, Brujeria, Gorgoroth, King Parrot, 36 Crazyfists, Anaal Nathrakh, Holy Grail, and more. Moreover, they’ve been praised by everybody from Kerrang! and Revolver to ARTISTdirect. In addition, INCITE has reached Top-40-status on Sirius Metal Charts with tracks like ‘Army of Darkness’ and the Devil’s Dozen on Liquid Metal with ‘The Aftermath’. Revolver also named 2012’s All Out War its “Album of the Week” upon release. In 2014, INCITE released what many consider to be their breakout release, Up In Hell, which spawned several singles and music videos. Since then, the band has released a re-issue of their first album, The Slaughter, as well as their most recent offering, Oppression.