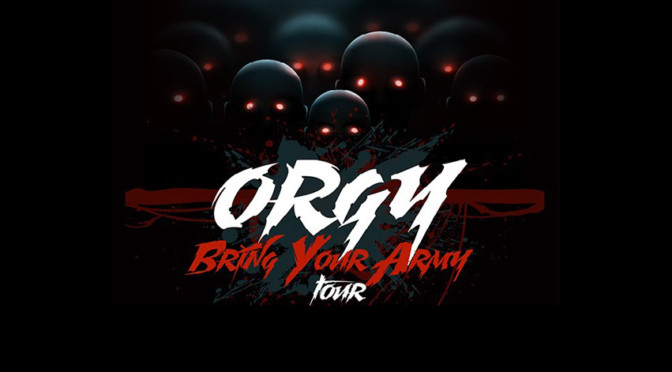 New ORGY guitarist Ilia Yordanov (pronounced ileeah) was born in Plovdiv, Bulgaria, and grew up in San Diego, CA and Seattle, WA. Ilia began playing shows at age 13 with numerous bands until assembling his own band, Red Museum, in 2006. The band went on to release four EPs. Ilia moved to Los Angeles in 2008 and has been living and performing there for the past 10 years so he could focus on his acting career, and has predominantly remained a solo artist, producing and engineering his own musical work. Additionally, Ilia directed the video for his single, “Fire in the Middle”, released in 2016. Ilia has also supervised and composed music for film. In addition to music, Ilia regularly performs stand-up at The Comedy Store, and has self-published a book titled, Dirty Mirror Talk.

LA native Ryan Browne grew up playing drums in bands and took his playing to the professional level at 15 by playing for Jive records’ pop duo, Axiz. Ryan attended Berklee College of Music (Boston, MA) and studied drum set, Afro Caribbean hand percussion, music production, engineering and music business. Upon his early graduation, he accepted an instructor’s position at the prestigious Icon Collective music production school back in Los Angeles. Since diving into electronic music production, Ryan has released through Geffen Records, Borgore’s imprint, Buygore Records, Tommie Sunshine’s Brooklyn Fire, Pantheon, and more. He has worked alongside artists such as 2018 Grammy Award Winner Latroit, Sullivan King, Whyel, Warden, and Trentino, amongst others. He has also mixed/mastered music for 2ToneDisco, works closely with Dennis White at White House Music doing sound design and writing for sync libraries, and plays drums for genre-bending hybrid Monstercat/Mau5trap artist Grabbitz. Ryan’s diverse musical palette has earned him consistent support from major electronic publications like NestHQ, Dancing Astronaut, and Your EDM, which puts him in a unique and influential position, ready for an explosive and exciting future.

“Our former drummer Bobby recently opened a music school in Orange County and we are excited for him. With the drumming position open, we quickly found Ryan Browne, a Berklee College of Music graduate and instructor at Icon Collective who specializes in colliding metal with electronic bass music and makes drum videos for his own original songs and remixes. I saw one of his videos and knew instantly that he was the guy we had been looking for. We’re only a week into rehearsals so far and both Ilia and Ryan have greatly exceeded my expectations. This is going to be an epic tour, to say the least.”

BRING YOUR ARMY TOUR 2018;
with Motograter, Brand of Julez & the Crowned

“Army to Your Party” is impacting a rock radio now and is also featured on the MX vs ATV All Out video game by THQ Nordic and Rainbow Studios – available now for Playstation4, Xbox One, and PC. Learn more here: https://mxvsatv.com/

via D1 Music /DLC Records, and a promotional tour, the band went on a hiatus to work on their side projects. In 2011, after seven years of demand from fans for new music and a tour, founding member Jay Gordon (vocals) decided it was time to kick things back up and begin recording and touring again in support of ORGY‘s fans.