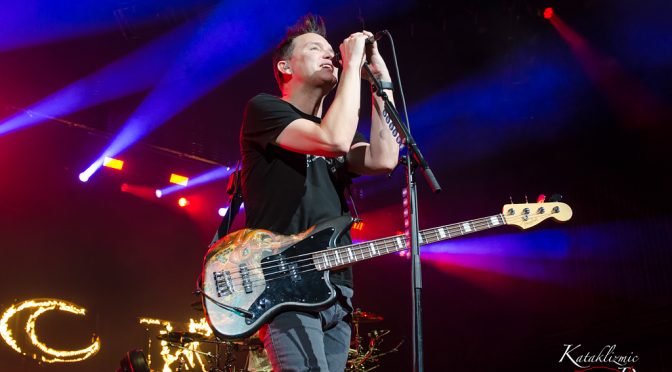 PHOENIX — With the word “FUCK” emblazoned in flames behind them, Blink-182 opened their set to a packed house at the Ak-Chin Pavilion on Saturday, Sept. 24. Despite steep ticket prices, the long-awaited return of the pop-punk headliner, along with openers All Time Low and A Day to Remember, brought fans out in droves. And they didn’t disappoint. Even after 24 years, Blink-182 was able to bring the same energy and bawdiness fans have come to expect.

The set opened with “Feeling This” from Blink’s self-titled album, followed by “What’s My Age Again?” “Family Reunion” and “The Rock Show.” Finally, they gave the audience a taste of their new release, California, with the song “Cynical.”

Since hitting record stores in July, California has already topped the Billboard 200, making it Blink’s first number-one album since their 2001 success, Take Off Your Pants and Jacket. It was also their first album produced by John Feldmann whose past production work has included albums for Good Charlotte, The Used, All Time Low, and 5 Seconds of Summer.

However, what was perhaps most notable to long-time Blink fans was the absence of founding band member Tom DeLonge, who was replaced by Alkaline Trio lead vocalist and guitarist Matt Skiba at the start of 2015. The change came after DeLonge decided (for the second time in the band’s history) to take an indefinite hiatus from the group.

His announcement was a match in the powder keg of turmoil that had been brewing after DeLonge’s work with Angels & Airwaves and other projects were cited as the cause of long delays to recording a new Blink-182 album. But with Skiba in the band as a ready and willing partner, it looks like Blink-182 has finally put an end to the false starts and opened a new chapter.

If Phoenix fans had any reservations about Skiba, there was certainly no evidence of it Saturday night. During one of several “audience participation” segments, Mark Hoppus told concert-goers, “Oh Phoenix, you’re in for a fucking treat now. This is ‘Sing Along with Matt.'” He paused, looked back at the crowd sternly, then repeated more seriously, “I said, this is ‘Sing Along with Matt.'”

Without hesitation, the entire venue erupted into a cacophonous choir and joined Skiba in singing “Reckless Abandon.” Then after playing “Kings of the Weekend,” Hoppus and drummer Travis Barker jammed together for a moment to loud cheers and applause, clearly having a good time. “You’re welcome because that was me and Travis time right there,” Hoppus said.

“We’re switching out the set a little bit tonight,” Hoppus announced at one point. “Just for you… Fuck all the other cities we’re going to,” he joked. Then during the part of the set when Blink would normally play “Not Now,” they gave concert-goers an unexpected treat and played “Man Overboard” instead. “Just for you, Phoenix!”

The show was rife with special effects, from fountain fireworks flowing from the rafters at the end of “Down,” to plumes of flames shooting up from the back of the stage during “Bored to Death.” During “Dumpweed,” several blow-up dolls were passed out to the audience and bounced around like beach balls. And later, the group turned off all the lights and played “Happy Holidays, You Bastard” to the light of thousands of mobile phones.

“You guys having fun? Not anymore. Not. Any. More. This next song is fucking sad,” Hoppus told concert-goers before playing “Stay Together for the Kids.” He joked that the song was so sad, it was practically emo, comparing it to what would result if Jimmy Eat World and The Used had a baby. He also dedicated “I Miss You” to all the ladies.

But it was Blink-182’s encore that really hit it out of the park. Skiba and Hoppus returned to the stage with neon pink and white guitars and played “Carousel” to more fireworks. They followed it up with “All the Small Things,” turning a kiss cam on the audience. Then they rounded it out with “Brohemian Rhapsody” and “Damnit,” which ended with thick plumes of confetti spewing from either side of the stage onto the audience. And even when everyone had cleared the stage, Hoppus still came back one more time and gave concert-goers a short drum-solo to wrap up a wild night.