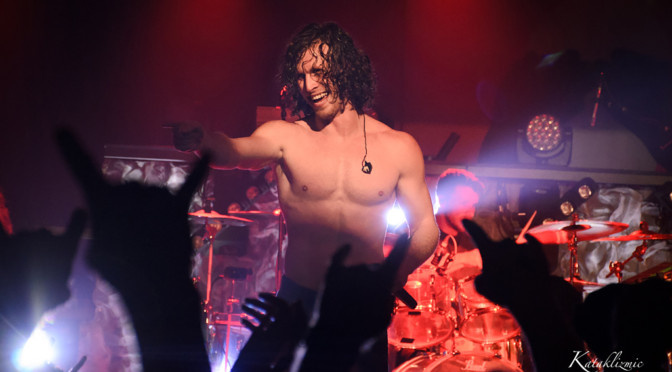 PHOENIX — Nothing More put on an explosive performance in Phoenix Wednesday night at the city’s eye-catching new venue, The Van Buren; named in honor of the historic Martin Van Buren. Once inside, it was a pretty swanky setup: grandiose crystal chandeliers dripping from the ceiling, marble double-sided bars wrapping around the room and on the back wall, an enormous, technicolored mural of the Sonoran Desert surrounded the stage — a fitting theme considering the band was formed out of San Antonio, TX. Interestingly, Nothing More frontman Jonny Hawkins is actually an Arizona native. This is a fact he shares with drummer Ben Anderson who is known for his presence in local success story Digital Summer.

After stirring performances by Hell or Highwater, My Ticket Home, and Palisades, it was obvious the crowd’s anticipation was at its peak. All eyes were on the stage as the lights dimmed and the introduction to “Christ Copyright” rumbled out from beneath Anderson’s drum set. In a flash of white light, Hawkins entered the stage rocking his classic barefoot, shirtless style while yelling, “What’s up Phoenix?!”, as the remainder of the band stepped on stage behind him. A haze of blue and red light filled the room as the band moved right into meteoric performances of “Let ‘Em Burn”, “Mr. MTV”, “Don’t Stop”, and “Ripping Me Apart”; kicking things off with a mixture of heavy-handed tracks from Nothing More’s fourth and fifth studio albums, Nothing More

and The Stories We Tell Ourselves

The Stories We Tell Ourselves was an immediate favorite among fans after its release in mid-September of this year, coming in at 15 on the Billboard 200. And rightfully so, as the band’s live stage presence is both wildly unapologetic and deeply emotional.

Their set featured a variety of face-melting solos by each of the band’s highly talented members, but after their hit single “Go To War”, Hawkins and lead guitarist Mark Vollelunga decided to slow things down a bit. Midway through the night, the duo came together for a heart-wrenching acoustic performance of track “Just Say When”, which moved some neighboring fans and myself to tears. It’s a song that Hawkins said “almost didn’t make it onto the record” because they thought it might be “too sappy“. As is the case with many classic emo-toned favorites, the sad love story of the troubled rock star hit us right in the feels.

As “Just Say When” came to an impassioned end, the remaining members of Nothing More took the stage once again, throwing themselves into songs “I’ll Be Okay”, “Here’s To The Heartache”, and “Do You Really Want It”. Fans visibly rejoiced as bassist Daniel Oliver strapped his instrument into the infamous “Bassinator” while Vollelunga and Hawkins aggressively plucked and tapped along the fingerboard. They were, presumably, pumping up the audience for a prolific performance of profoundly personal track “Jenny”, the third single off Nothing More’s self-titled album which spotlights Hawkins’ sister’s struggle with mental illness — a topic that hits hard for many of the band’s listeners.

Just as we sang along to the closing lyrics of “This Is The Time”, Hawkins stepped forward to address the crowd for one of the last times that evening. “Well it’s that time of the night; it’s our last song. Who has seen us before? [Cheers] Who has never seen us before? [Cheers] We are a band that does not give encores because one: they’re fake, and two: they’re fake. We’re just going to play our last song instead, and give it all we’ve got.“

And just like that, Hawkins was back at it again, flinging his water bottle into the crowd and jumping all over the stage as he and his band mates poured their souls into iconic track “Salem – Burn The Witch”, standing atop their latest mega-futuristic, one-man-band machine – a 400-pound, 14-foot tall instrument. The members of Nothing More dubbed it as “The Scorpion Tail” in an interview with local radio station 98 KUPD earlier this week. The crowd went absolutely insane for it, cheering Hawkins on as he not only drummed with his feet, but sang as well. Even employees of the venue gathered to watch in awe, some with their fists thrust into the air.

To say this performance was “impressive” would be to sell it short. Nothing More swept us off our feet yet again, and Phoenix will absolutely be back for more.