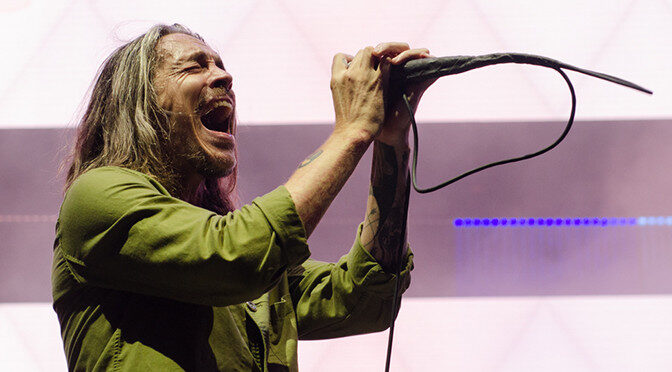 PHOENIX — Ak-Chin Pavilion wrapped up its summer concert series with Incubus, Sublime with Rome, and The Aquadolls as part of their “Summer 2022” tour. The three California bands brought a reggae-meets-alternative end-of-summer party to Phoenix, and a party it was! The kick-ass girl band The Aquadolls, plus 90’s and beyond radio favorites Sublime with Rome and Incubus brought a “chill” to the desert and a whole lot of fun for a Monday night in Arizona.

The Aquadolls emerged as Abba’s “Dancing Queen” ushered them onto the stage. Singer and lead guitarist Melissa Brooks shouted, “Who’s ready to party?” and jumped into the 2013 song “Mine” from their album Stoked on You, followed by “Our Love Will Always Remain” from the same album.

The all-girl band of “perma-teenage mermaids” from the Orange County area were founded in 2012 by lead singer and writer Brooks, who recorded demos in her bedroom before signing with indie label Burger Records. Their current lineup includes Jacqueline Proctor on drums and Keilah Nina on bass. Their tongue-in-cheek lyrics paired with an upbeat pop sound served as a great fit for this summer tour. A psychedelic, tie-dye screen with floating palm trees and the Aquadolls logo were the perfect scene-setting backdrop for their high-energy pop-alternative music.

Their seven-song setlist continued with their new single “Beachy,” which is scheduled for release on August 26th on Enci Records, and a high-energy cover of the Go-Go’s classic hit “Vacation.” Brooks gave a shout out to their crew and tour headliners: “Who’s ready for freaking Sublime? Who’s ready for freaking Incubus?!” while the exuberant crowd cheered. Next up, a catchy and fun song about obsession, “Sneaky,” followed by “Take Me Away.” Finishing out the set was a song Brooks said was about tripping out, called “Wander.” The Aquadolls made sure to take time for fans at the merch booth after their set.

With flashing red and blue police lights and images of riots projected behind them, stoner-music favorites Sublime with Rome kicked off their set with “April 26, 1992”. As if on cue, the arena filled with the smell of weed, with Rome Ramirez asking, “Where my stoners at?!” before sliding into the weed-friendly anthem “Smoke Two Joints.” Eric Wilson’s deep guttural basslines hit hard during “Doin’ Time” while images of lowriders were projected on the screen and the crowd sang along to the chorus, “most definitely”. Drummer Carlos Verdugo didn’t miss a beat with his huge beaming grin, and his unique bent-elbows-held-high style of drumming.

The band played more reggae-inspired hits next with “The Wrong Way” and “Badfish”. They also made time to pay homage to “our brothers in Katastro”. The Phoenix reggae-rock band Katastro lost their lead singer, 32-year-old Andy Chaves to a deadly car crash on May 12th on the Pacific Coast Highway in California. Sublime is no stranger to loss, and have rebuilt the band following the death of original singer Bradley Nowell to a heroin overdose in 1996. With the house lights up, a dalmatian dog joined the band onstage, in honor of “Lou Dog,” the Sublime mascot who shared the stage with the band in the 90’s.

Ramirez started “What I Got” while fans danced with their flashlights on. Their set ended with the popular “Santeria”. Sublime brought their mega-talent and chill vibe for a fun, end-of-summer show.

“I want my, I want my MTV…” from “Money for Nothing” by Dire Straits played over the P.A. as the walk-out song for Incubus, the third California-based band of the tour. On came the lights, and frontman Brandon Boyd sang a powerful version of “Nice To Know You” to kick off a nearly two-hour set covering three decades of songs from the alternative band. Boyd spent the entire set on a chair, stating he hurt himself without elaborating how, but amused by the spinnable chair.

With his shoulder-length hair and white pants, Boyd said he remembered playing Ak-Chin Pavilion years before, after traveling from California in a van when Incubus toured with Dirty Heads in the 90’s. Currently, he is touring with bandmates Mike Eiziger on guitar, Chris Kilmore on turntable, José Pasillas on drums, and Ben Kenney on bass guitar on a 27-date U.S. tour that began July 24th and wraps up September 3rd.

Next up was “Circles,” matching the track sequence from Morning View. Afterward, the house lights came on and Boyd asked for the crowd’s help as the band performed “Wish You Were Here”. A powerful version of “Anna Molly” blew the crowd away, followed by an amazing, extended version of “Just a Phase” with a little of The Doors “Riders on the Storm” injected into the middle.

Their 16-song set was full of both radio hits and deep cuts from their 30-year history, like Make Yourself’s “Stellar” and “Pardon Me”, “Sick Sad Little World” from A Crow Left of the Murder, 2020’s apropos “Karma, Come Back” from Trust Fall (Side B), “Vitamin” (barely placating S.C.I.E.N.C.E. fans) and more. During “Mexico” the injured Boyd placed his arm around guitarist Eiziger’s shoulder in a sort of seated side-hug and sang the “ooo”s of the song’s bridge in a beautiful bromance moment.

When Incubus said goodnight, fans naturally were not having it. With cell phone flashlights beaming, the fans cheered for more, and the band returned to the stage. They closed out the night with “Warning” and “Drive.” What a way to end the summer – three hella chill bands bringing Cali-style fun and cool vibes to the desert!

Incubus* | Sublime with Rome* | The Aquadolls*