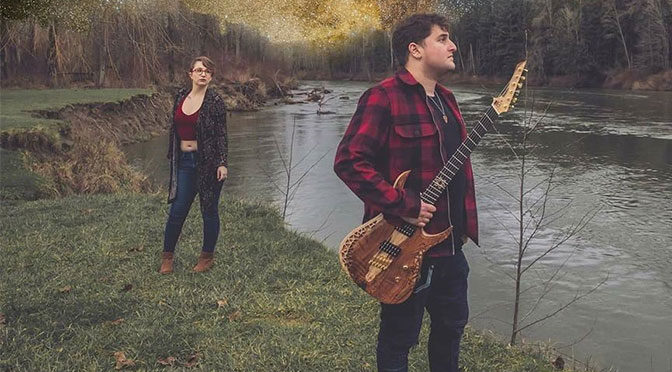 Kadima, the brainchild of Seattle-based guitarist Aidan Israel, has unveiled their debut prog metal opus, All Birds Deserve to Fly. Recorded with a host of accomplished guest musicians, Israel set out to create an amalgam of a Devin Townsend-influenced album with a Coheed and Cambria writing style and The Contortionist’s ambiance while creating a distinctly Kadima sound.

All Birds Deserve to Fly is available via Bandcamp, Apple Music and Spotify.

The seven-track album opens with “Here and Where,” which begins with a soft, spoken word intro before bursting into soaring guitars. From there, All Birds Deserve to Fly continues through peaks and valleys of quiet and ethereal numbers to technical hard rockers where vocalist Kaylee Jorene shines in performances reminiscent of Anneke van Giersbergen. With All Birds Deserve to Fly, Israel aims to tell complex stories through a strong narrative while also connecting with his Jewish roots and Jewish Mysticism.

“All Birds Deserve to Fly is a concept album detailing mental health struggles and my spiritual connection to Judaism,” says Israel. “When one writes music, they’re meant to rip themselves open and expose themselves to the world. The concept of Kadima is meant to guide our light to a new level of spiritual understanding and wisdom. I am beyond honored to share this with you all as it truly means the world to me.”

All Birds Deserve to Fly follows the Jewish concept of Tohu and Tikkun, which is the idea of chaos and rectification. The album is told through the lens of a person with schizophrenia: It centers around the challenge of a myriad of thoughts and ideas racing through their brain while seeking to become whole, rectify problems in their life, and come to a better spiritual understanding.

The roots of Kadima date back to when Israel began playing guitar as a pre-teen, influenced by concept albums such as Rush‘s 2112, Periphery‘s Juggernaut Alpha and Omega, and most importantly, Dream Theater’s Metropolis Pt. 2: Scenes of a Memory. Kadima, which means “forward” in Hebrew, is based on the idea that music seeks to transcend and grow in a progressive fashion.

“What attracted me to the idea of a concept album and progressive metal, in general, was the ability to convey ideas and tell complex narratives through a means that seemed supernatural and super-advanced,” Israel says. “Music was everything to me from the time I picked up the guitar. It was love at first sight. The guitar was a medium for conveying a sense of power and pride.”

As a Music major at the University of Oregon, Israel began pursuing his dream, but the dream was put on hold when he began displaying abnormal behavior. After a psychiatric evaluation, the guitarist was diagnosed with Schizoaffective Disorder and dropped out of the program. But recovery presented an unforeseen hurdle: “I then underwent psychotherapy through outpatient treatment and medication, but the medication was so hard on my body that I entirely forgot how to play guitar due to muscle memory loss,” Israel says.

After a year of treatment, Israel successfully petitioned to rejoin his academic program – and though he struggled with relearning a skill he had already put 10 years into mastering – successfully completed the program. During his time in school, Israel began outlining a concept album based on his mental health experiences, with plans to record it under the name Kadima.

After graduation and the mental health endeavor that Israel deems a “quarter-life crisis,” the gears were finally set in motion to make Kadima’s debut a reality. Along with his college buddy Sam Mendoza, Israel spent the summer of 2019 writing and recording the skeletons of what would become All Birds Deserve to Fly.

Originally planned to be a five-song EP, two of the tracks were split into separate entities, making All Birds Deserve to Fly into a full album. The album is dedicated to the memory of Peyton Arens, a young guitar prodigy who was influential in Israel’s musical pursuits and passed away at the young age of 13 from Rhabdomyosarcoma cancer.

While All Birds Deserve to Fly was recorded with a lineup of studio musicians, Israel plans to assemble a live lineup for future Kadima performances.

All Birds Deserve to Fly Lineup: