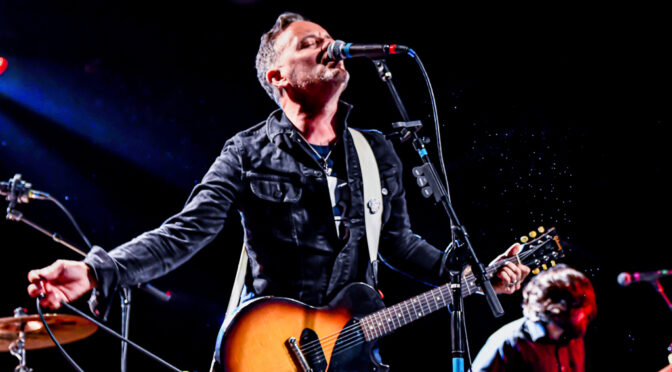 Dave Hause’s music is a punk-infused take on the classic singer-songwriter that is equal parts righteous anger and soulful introspection. Since going solo from The Loved Ones, he’s released four stellar records: 2011’s Resolutions, 2013’s Devour, 2017’s Bury Me in Philly, and last year’s Kick. Between his often clever lyrics and shifts from ballads to all-out rockers, he is, arguably, the Elvis Costello of this generation.

A constant presence on the road in a different time in our world, he was a magnetic live performer, who managed to be just as entertaining when bantering with the crowd as he was playing music. In fact, when we first tried this interview, he was in the middle of a tour. When the world shut down, the questions originally asked no longer made sense, so I rewrote my questions to reflect this new world reality, and he was generous enough with his time to answer them for me.

RYAN: Dave, first off, thank you for taking the time to do this. As I think I’ve told you, I’m not a full-time music journalist and am just a school teacher who does this in my spare time for fun. When the woman who created and runs our website asked me if I ever wanted to do an interview, you were the first name I mentioned just because I’ve talked to you a few times after shows over the years, and you’ve always been such a friendly guy every time that I knew you’d be a great interview.

Since your tour was cut short by COVID, you’ve transitioned to doing online shows, which have been a lot of fun and have had the same atmosphere as your solo shows. Was it difficult for you to start doing the online shows and how has preparing for them been different than preparing for an in-person live show?

DAVE: It is difficult. My neighbor works for a big software company and was struggling with having to work entirely via Zoom, and we shared some of the same challenges. Social cues are different (or non existent), there is a lag time, and you’re simultaneously trying to focus on performing AND considering the audio, software glitches and wifi speed. Just like anything though, you do your best and hope for the best, and keep your true north at delivering the song the best way you can in the moment.

RYAN: One of the things I’ve always loved about watching you play live is the spontaneity of your live shows and that they’ve always felt fun and loose. A big part of that stems from how you interact with your audience.

Have you found that doing the live shows allows you to maintain the same atmosphere of your in-person shows, maybe through reacting to fan feedback as you’re playing?

DAVE: No, I have to build that into the live streams, which is why I add covers and old songs, it’s to keep the tightrope taut, so I can attempt the magic trick of walking over it. Interacting with fans online is tough because it is harder for the rest of the “crowd” to relate the way they would if they were all in the same room.

RYAN: Throughout this, you’ve played online shows with some of your friends, such as Brian Fallon, and it’s reminded me a lot of Chuck Ragan’s Revival Tours, a couple of which you’ve been a part of.

How has it been working with other artists remotely, and do you see this as something you’ll continue to do, maybe even on a growing lineup of artists with many of you playing together or trading off songs?

DAVE: One of the positive things about this pandemic and having to stay home is that I’m co-writing more with friends; we’ll see what comes of that. I think you’re referring to the short period where I did a bunch of things online to stay busy when the initial quarantine happened, but I’ve intentionally haven’t done much online since May. I feel like there’s so much going on and I need more quiet. I want to spend more time with my kids, and the online shows prompt a ton of anxiety in me, so there’s that part of it. I also have been recording songs like crazy. More news on that soon.

Has this time at home and off the road allowed you to start working on new material, and will a new album come out of this?

DAVE: It has allowed me to start writing, yes, and it will lead to the 5th solo record. I think I even already have the title, which is a first; I usually don’t find a title for an album til towards the end.

If so, since the pandemic prevents the opportunity to get everyone together to record in a studio, how will you handle the recording of new material? Will everyone work together remotely, or will it perhaps be a more intimate recorded-at-home solo record, a la Springsteen’s Nebraska?

DAVE: I’m not that far along yet; we are still working on the songs themselves. We’ll figure out how to record them later. Meantime, the stuff I am recording now is definitely born of the “I-can’t-tour-on-this-anyway” mentality, so it’s really fun to just create without any of that in mind. I’m so excited about what we are putting out in October.

RYAN: You’re not a guy who shies away from his feelings on a lot of issues. When you last played Phoenix, opening for Bad Religion, you asked the audience to hold up a finger towards Washington, before playing “Dirty Fucker” off of Buy Me in Philly, which drew a mostly positive crowd reaction, save for one person who seemed annoyed — which I thought you handled well.

Do you feel in a way that it’s your duty, especially with your platform, to speak out and let your music hopefully at least get people to think more about what’s going in the world, especially right now?

DAVE: I do feel compelled to; not sure if it’s a duty or not. I think we are in one of the bleakest times in our country’s short history, and I want to be crystal clear about how I feel about it. Should we see the administration change in November/January, I’ll be as outspoken as I feel compelled to be when they’re running the ship too. I never trust the people in charge.

I purchased “Your Ghost” from Bandcamp, and it’s such a heartbreakingly gorgeous song. Using the death of George Floyd and his final words as a refrain throughout the song really hit me as I listened to it. Was this a difficult song for you to write, or was it one that almost poured out of you?

DAVE: It was difficult. Tim and I labored over it more than many other songs, because I think it is a loaded thing for a privileged white rock and roll singer to sing “I Can’t Breathe”. I’m glad we put the extra time in, and I’m thankful to various friends and colleagues who helped to make sure we got the tone right.

One of the things that really stands out about “Your Ghost” is the backing vocals by Kam Franklin of the great band The Suffers, which felt almost like a ghost in pain haunting the song. How did she come to be involved in the song, and what was the collaboration with her like?

DAVE: That was suggested to me by my agent, Alex Fang, after he heard the song. I was familiar with both and totally blown away that they agreed to do it, and then did such an incredible job with it.

RYAN: As I was listening to it, I remembered your song “Seasons Greetings from Ferguson,” which you released during the Ferguson protests in the wake of Michael Brown’s murder. In fact, “Your Ghost” and “Seasons Greetings” feel like they could be the A and B side of a 7”. It’s sad that the two songs were recorded nearly six years apart and yet nothing has changed.

Were you thinking of the writing and recording of “Seasons Greetings” as you were working on “Your Ghost,” and how would you say the two songs differ, perhaps in tone or approach to the topic?

DAVE: Yes, they’re meant to sound related. The delivery, the chord choices, and the tone are similar. My intention after “Seasons Greetings” was to continue a sort of a singles series of socially related songs, maybe 1-2 a year, but I didn’t finish a bunch of them and got sidetracked in 2015 and 2016. When Kick came around, we wanted to put a bunch of those kinds of songs on that record, so we went with the traditional full album release. The experience with “Your Ghost” sort of reignited that desire to get some topical singles out quickly as we move forward. We’ll see.

RYAN: You’ve had several big life changes in the past couple of years, including moving and marriage, but anyone that follows you on social media has seen that not only are you a father to twin boys, but that you’ve embraced fatherhood with a lot of joy. (I especially enjoyed the video of you vacuuming the house with both boys strapped to you).

How has fatherhood changed how you approach life in general and your music specifically, especially now that the pandemic means you aren’t leaving for tours and are just getting to be home with your family?

DAVE: This could be the topic for a whole book. Ultimately, I’m trying to make life all about them instead of all about me. That’s a challenge, but an incredibly rewarding one. It’s been the greatest thing that’s happened to me in my life.

RYAN: Again, I appreciate it and hope all is well with you and your family. I look forward to this all being over to whatever degree it can be over and getting to see you back out on the road again.