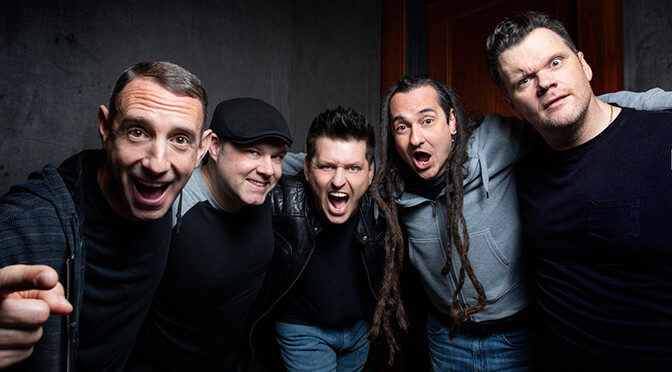 Ska punk luminaries Less Than Jake will be launching their third creative installment of Lost At Home Sessions. Volume Three “The Sit Around” goes on sale today at 12pm EST over at Bandcamp.

“I was ‘sitting around’ watching the news one day,” describes saxophonist and vocalist JR Wasilewski. “I thought about how me and my group of friends used to joke when we were kids working summer jobs, how awesome it would be to just be able to sit around all day and do nothing besides play video games and go to the beach without a care in the world. But when presented with that situation, everybody quickly realized how incredibly impossible it seemed to actually just sit around.”

The lyrics for “The Sit Around” were written by Wasilewski and it’s also the very first song that he sings the lead. “We’d been punting around the idea of me singing leads on a song for years,” Wasilewski explains. “To be frank, I always said no thanks. I felt (and still feel) Less Than Jake is most identifiable by those two voices (Chris and Roger). Adding a third voice beyond just a background vocal, to me, seems to mud up the waters. I like to sing, I just never saw myself as a lead vocalist.

“We talked about it for this song and I said I’d entertain the idea of a lead vocal, mostly because this Lost At Home project is allowing us to test the waters creatively. It’s not a proper album, just songs composed during a strange time in history. I figured if there was ever a time for me to sing, why not now?”

Those who purchase the song at the current price will automatically be entered to win a prize pack (pictured above) that includes an old and rare glow-in-the-dark bobblehead and some out of print vinyl. Contest entries close on July 24th.

Proceeds Benefit Bread of the Mighty

A portion of the proceeds will benefit Bread of the Mighty Food Bank, a North Florida-based food bank that has been serving the community for over 32 years. They collect, sort, store and distribute donated food and basic essentials to over 190 non-profit agency partners such as food pantries, churches, homeless shelters and other organizations who then distribute food in their communities to directly feed the hungry. For every dollar donated, they can provide up to ten meals.

Continuing to play over 150 dates a year while also writing and recording new material has kept the band fresh in a time when “ska” has become something of a four letter word. The list of acts they have supported is staggering (Bon Jovi, Linkin Park, Snoop Dogg), while the list of bands that have supported them makes even the most hardened music industry veteran do a double take (Fall Out Boy, Paramore, Yellowcard). All the while the band has held firm to its punk rock roots and have managed to live through many musical trends simply by just being Less Than Jake.

With well over 300 releases on various labels under their belt, most would think their legacy is already in tact, but the status quo has never interested Less Than Jake. They continue to write and perform new material and have no thoughts of letting up. With the energy and exuberance of a band half its age and the determination of savvy veterans, there is seemingly no end point to this enduring and entertaining band.