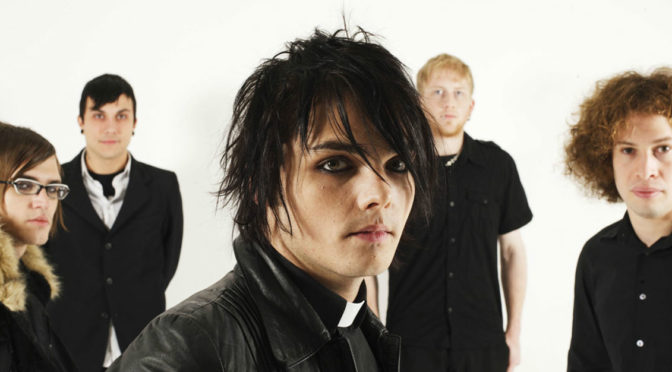 Ever since My Chemical Romance (“MCR”/”My Chem”) started trickling out international tour dates following their sold out Los Angeles reunion show on December 20th, 2019, fans in the States have been on the edge of their seats and scouring the internet for any clues they can dig up — even analyzing the source code of the band’s website.

The disciples of the legendary emo/pop punk/post-hardcore group (the “MCRmy”) were quick to pick apart visuals they found in photos and the multi-cam full show posted on YouTube, comprised of a compilation of fan footage. They found a symbol on frontman Gerard Way’s jacket, which they learned was a sigil.

This behavior of MCR fans is clearly no secret to the band, and they put quite a bit into generating hype with media crafted to keep their fans anticipating what is to come. Amidst all of the taunting clues, those with knowledge of the occult, witchcraft, angels, and magic have been able to lend their knowledge to the fanbase. Many have speculated that considering all of the new branding and merch we have seen, there must certainly be a new album in the works. In the band’s videos, they have noted a star of which they believe the 5th point represents what would be the band’s 5th studio album — but this is purely one conjecture of many.

My Chem really started letting the cat out of the bag yesterday afternoon, when they posted a video that fans picked apart, just as they had been with other mysterious videos posted on Jan. 19, Jan. 16, and Jan. 9. By now, they were quick to recognize the sigils that flashed in the footage like subliminal messages, and they got to work deciphering them straight-away. It did not take long at all for the community to discover that they were U.S. cities.

pretty sure this ones Tacoma washington pic.twitter.com/D2QLstNmAj


Meanwhile, there were also allegedly leaks from a Houston radio station and a Dallas venue, which further cemented the belief that a tour announcement was impending.

This morning, a cinematic video with the reveal was posted to YouTube at the promised time, and the suspected tour was confirmed.

The MCRmy’s theory was validated, but their hunger for more is insatiable after years grieving over the loss of the band since their hiatus beginning in 2013. Fans want a new song, a new music video, a new album… They want My Chemical Romance fully resuscitated.