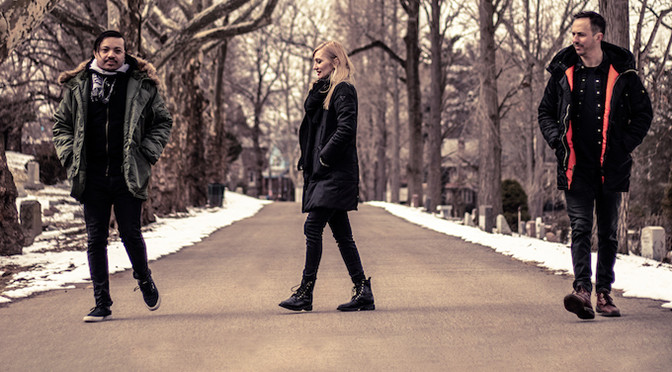 Guitar player/singer Mario Quintero talks about the meaning behind the track, “’The Particle Noise’ is a multi-dimensional song. Mainly being a love story about the beginning of the universe. A moment so intense that it encapsulates what it means to exist. This all being a metaphor for this person’s infatuation with another, so strong it tears them to pieces and reforms them over and over.”

About the record, Mario continues “It’s intangible, It’s intense. It’s beautiful. There’s an impending darkness underneath everything and a sense of unease, but it’s also honest and vulnerable. It’s just really important to us. Regardless of why anyone might react, that’s why we do it.”

Mario handled the production work on the eight-song album, which was recorded in he and bass player/singer Sarah Quintero’s basement. Love & Decay also finds the band officially grow to a trio, with touring drummer Chris Enriquez becoming a full-time member.

“Seismic is also imbued with an almost celestial warmth. After all, if you’re going to shoegaze, why not do so from way up in the stars.” – RECORD COLLECTOR

“Seismic…both sharpens up the guitar and intensifies the somnambulist sheen…they are at their best when strands of guitar and synthesizer tangle and weave, producing something akin to a lullaby, albeit one that’s far from sleep-inducing…it is nimble and concise, thoughtful and focused – a sideways take on the genre and a refreshing change from the downbeat onslaught of their nearest contemporaries.” – THE WIRE

“… the Quinteros make some truly huge-sounding music, much of it crushing. There’s an ethereality and grace about it, however, which makes the ambitious expanse of Seismic consistently interesting throughout its hour-plus runtime.” – TREBLE ZINE

“They avoid many of the common pitfalls associated with some shoegaze or sludge artists in that the album never feels like it drags. Sometimes doomy, sometimes romantic, it’s as heavy as it is beautiful.” – GHETTOBLASTER

Spotlights‘ story happens void of spectacle, show, or tableau. However, in this day and age, that might be why their story feels so serendipitous and strange, if not utterly surprising. This story also instantly appealed to some rather influential peers who lent an early endorsement. Two musicians – a husband-and-wife duo, Mario [guitar, synths, vocals] and Sarah [bass, guitar, vocals] – simply pick up their instruments and mainline dense distortion, spacey soundscapes, and unnervingly serene vocal transmissions directly from the heart. This unpredictable, yet unassuming sound quietly heralded their arrival in 2016 on the DIY debut album, Tidals.

Brooklyn Vegan stumbled upon the project and streamed “Walls.” The song eventually entranced musician and producer Aaron Harris (ISIS/Palms) who shared it with Palms’ singer, and Deftones frontman, Chino Moreno. An invite to open the Deftones summer tour soon followed and kickstarted an envious touring resume, with the band having been picked to open for the Melvins, Quicksand, Hum, Glassjaw, Pelican and Pallbearer. Ipecac Recordings co-founders Mike Patton and Greg Werckman fell under the band’s spell and signed them. Spotlights’ Ipecac Recordings’ debut, Seismic, arrived in in the Autumn of 2017. During the following months, Spotlights also recorded an Audiotree session and released the Hanging By Faith EP.