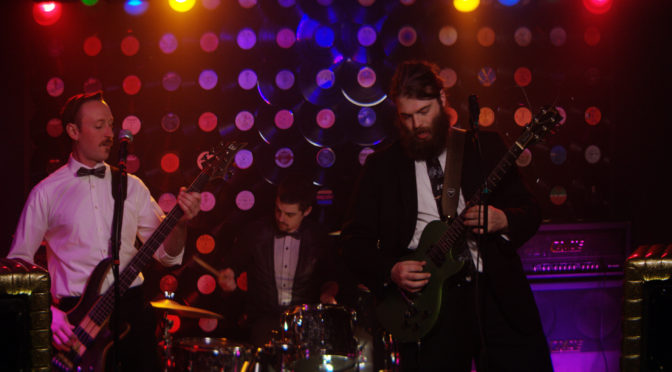 Omaha, NE based, alternative rock group, The Party After,
have released a debut single, “Philophobic” on Valentine’s Day. They quickly teamed up with director/producer David M. Weiss and producer Angela Root with D.M.Weiss Productions to pair with the song a music video that would inspire humor through creative visual themes and a song that digs deep into the unpleasant sides of attraction.

This new tune, mixed and mastered by Grammy-nominee Tom Ware at Warehouse Productions, is a story of the darker side of love and of the negative emotions that can come attached to it. The video revolves around a newly formed relationship between the mythological beast known as Sasquatch and a beautiful, blonde woman (Gina Comparetto) who seems poised to turn this hairy wonder into her ideal man. Watch the video HERE.

The power trio was formed initially as a four-piece in 2011 under a different name, but after tumultuous events on the road to stardom, the remaining three members have rebranded and are getting ready to hit the ground running yet again. Along with a new batch of hard-hitting, catchy tunes, the group has brought their live show to an energetic level that contagiously keeps the party rocking. The Party After has plans to continue releasing more singles, and possibly more video content, before the end of the year. If they come near you, don’t miss the chance to see this party in action!

The Party After Is:

The Party After Online: