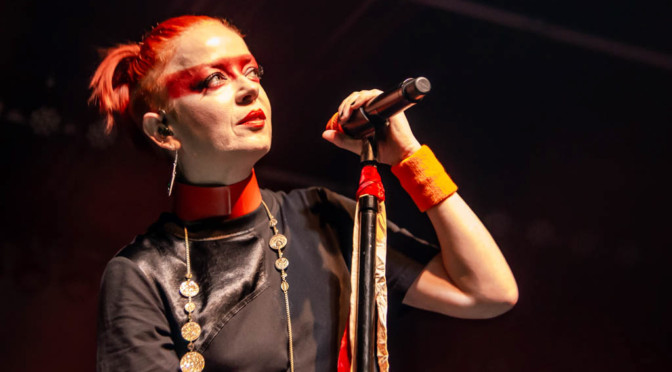 Tempe, AZ — On Sunday night, Garbage played at the Marquee Theatre as part of the “20 Years Paranoid” tour celebrating the 20th anniversary of the release of their Version 2.0

album. Opening for them was Rituals of Mine, a Los Angeles-based duo previously known as Sister Crayon.

At the start of the show, it wasn’t clear that Ritual of Mine’s self-described electronic/downtempo R&B sound would appeal to the packed house of late-to-middle-age Gen Xers. But as Terra Lopez sang “To Show You Violence,” the mood in the theater shifted from one of silent, reserved judgement to silent awe. Her indisputably powerful and clear voice resounded throughout the theatre to the applause of a crowd won over.

Rituals of Mine recently collaborated with Tricky and The Glitch Mob, and the duo is now working on their sophomore LP. They will also accompany Garbage throughout the entire U.S. anniversary tour. “This is a dream for us,” Lopez told the crowd. While Rituals of Mine isn’t a new act, the tour along with their recent collaborations could expose the group to a much wider audience.

“It is a privilege to share our stage with them,” Garbage frontwoman Shirley Manson said later during the show, “’cause not all musicians are good people, you know what I’m saying?”

When Garbage finally took the stage, they opened with “Afterglow,” followed by “Deadwood,” and “Temptation Waits”. To the delight of the audience, Depeche Mode’s “Personal Jesus” was mixed in midway through “Wicked Ways.” By the time “Special” began to play, the crowd was fully amped.

“This is an incredible surprise for us… We never ever know what we’re getting, and it is always extraordinary and it’s fun,” a breathless Shirley Manson told the screaming crowd. “We’re here to celebrate a record that was immensely influential for us as people. It took us all over the world.”

Version 2.0, the band’s sophomore album released in 1998, was immensely successful, quickly gaining Platinum status in the U.S. and selling more than four million copies worldwide. It received two Grammy nominations, including “Album of the Year” and “Best Rock Album”. And in 1999, the single “Special,” was nominated for “Best Rock Performance by a Duo or Group With Vocal”.

Garbage has often credited Version 2.0 with solidifying their place in 90s rock music. In June, they reissued a special edition of the album that included 10 B-sides, several of which they played during their show at the Marquee, including “Lick the Pavement” and their cover of Big Star’s “Thirteen.” The group also has plans to record a new album for release in 2019.

. Maybe it was the venue — the Veterans Memorial Coliseum has seen better days — or maybe it was just the changing state of affairs in the world at that time, but Manson seemed drained, world-weary and even a little sad. They delivered a powerful performance, but you couldn’t help leaving with the impression that maybe they weren’t coming back.

By contrast, Garbage was more alive than ever on stage at the Marquee. Manson seemed to have a renewed energy and vigor that made you forget you were singing along to songs that are now 20 years old.

During “Push It,” nearly the entire front of the house was jumping up and down with Manson and screaming the chorus. The stage was backlit with playful rainbow hues for “When I Grow Up.” Then, at the end of “Can’t Seem to Make You Mine,” Manson joined Duke Erikson at the keyboard to play glissandos back and forth across the keys.

“Despite what they will tell you, this is not a celebration of nostalgia,” Manson told concert-goers early in the evening. “It is a moment in which to collect you all in one space and feed off that mental energy that you just provided for us.”

But there was something undeniably nostalgic about the sound clips from familiar old movies interspersed between each song. Before “Hammering in My Head,” a clip of Rutger Hauer’s iconic monologue from the final scene of Bladerunner played: “I’ve seen things you people wouldn’t believe. … All those moments will be lost in time, like tears in rain. Time to die.” And before “Medication” they played a clip of HAL 9000 repeating: “Take a stress pill and think things over.”

Perhaps the most poignant messages of the night came after Garbage returned for their encore. “No life is very easy,” Manson told concertgoers. “Remember that today’s just a day. Tomorrow will be better. And if tomorrow isn’t better, maybe the day after that might be,” Manson said before dedicating “The Trick Is to Keep Breathing” to any fans who might be struggling.

They followed it with one of the band’s latest singles, “No Horses,” which Manson took some time to speak about.

“It is about the fact that we must never fuck up our planet and our beasts and our animals and the things that don’t make money and that, above all else, human beings are our biggest and most important resource.”

Garbage closed the show on a high note with “Cherry Lips (Go Baby Go),” a song that Manson called their ode to the LGBQT community, which she has been a very vocal supporter of over the years.