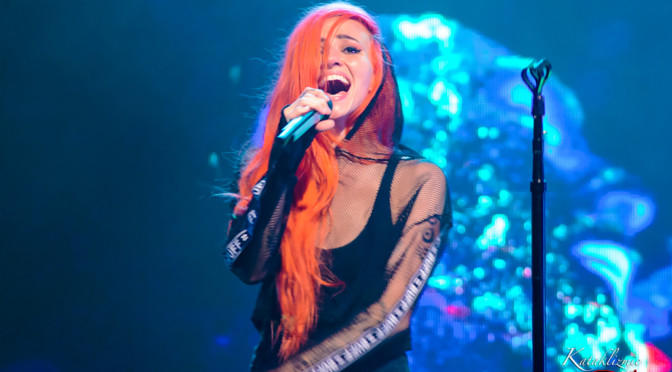 TEMPE, AZ – Lights, along with special guests Chase Atlantic and DCF, illuminated Marquee Theatre last Thursday. This eclectic mix of musicians magnetized a diverse crowd to The Marquee’s doors, and together, the entire venue celebrated a night of pure joy and musical euphoria. Fans of all ages blissfully enjoyed the great sound, atmosphere, and company of each band, but Lights certainly shone brightest of all — fans were dazzled by their otherworldly sounds and gorgeous visuals on stage, and it is clear for any outside observer to understand why they command an army of such devoted fans.

For those who know and love Lights already, they’re aware that this is certainly not Lights’ first rodeo — they’ve been to Phoenix many times since 2008, but as lead singer Lights Valerie Poxleitner put it, they come back stronger every time. From The Nile to Warped Tour, Lights certainly know how to command a stage of any size and location, and their attention to detail certainly transfixes audiences on multiple levels. As Poxleitner is an artist in more ways than one, it is no surprise that Lights’ live performances are as much visual spectacle as they are aural extravaganza. It’s no wonder that Lights has recently received nominations for the Pop Album of the Year and Artist of the Year categories in the 2018 JUNO Awards.

The first performance of the evening was DCF, an artist who is a compelling example of contemporary pop, alternative, and indie music styles. His was a solo act, yet he projected enough energy and personality to decently command the entire stage and crowd. Concert-goers, in fact, were somewhat devastated when it came time for Prince DCF to exit the stage after an acoustic version of “Misery Business” by Paramore, letting out an audible sigh as he departed.

DCF’s interesting style, mix of genres, and unique take on what is considered pop music all went well with what could only have been a Napoleonic-era Royal Navy Admiral’s Coat. Together with his stylish hairstyle and glasses, DCF exudes confidence and mirth as he DJs, sings, cracks jokes, and finds any other way to entertain a crowd. His performance was certainly a great ice breaker for the evening, though it did end on a relatively anticlimactic note.

Next up was Chase Atlantic, a wonderful group visiting all the way from Australia; they likely chased the Pacific in this case, but everyone at The Marquee was certainly happy to see them. They instantly took over the stage and crowd, carrying the momentum over from DCF and further building fans up for Lights later in the evening. Their high energy was contagious, and they also shared a unique take on contemporary music, just as DCF had done before them. It would be difficult to say exactly what they sound like, but all alternative musicians seem to be elusive when it comes to absolute definition.

Due to their eclectic mix of sounds, it was easy for everyone in the crowd to join in on the fun. Lead singer Mitchel Cave, who first got his big start on the world stage by performing on X-Factor Australia, must have chugged several energy drinks prior to coming out, because he was moving at the speed of light all over the stage. He also seemed to love having the audience join him in the adventure, jumping down to join them briefly, before hopping back up on stage to hype everyone up even further. Chase Atlantic was definitely a great act to follow DCF with, and these boys made the transition into Lights’ scintillating performance a flawless one.

Though the performances of Chase Atlantic and DCF were fantastic, some fans simply could not contain their excitement for the main act of the evening — Lights; in fact, one young fan was spotted running all over The Marquee, seemingly unable to contain her excitement. It was clear this was likely not her first time seeing Lights, and her excitement proved to be quite the harbinger of the incredible musical and visual adventure ahead.

Lights came out on stage after quite the setup time, but the wait was certainly well worth it. Immediately, fans were greeted by lead vocalist Lights Valerie Poxleitner’s silhouette in front of a massive screen; the bright, neon lights behind her perfectly symbolized the band’s name, and the hype and tension felt throughout the crowd instantly reached a breaking point. The buildup to her full visual reveal was palpable, and her glamorous, vogue-like poses as she sang in her spectral, ethereal form brought out the best fashion week vibes. Finally, she emerged from the darkness and into the light to a feverish sea of fans.

We Were Here Tour – Issue One

Lights performed in 3 major acts throughout the evening. During the first act, Poxleitner kept the energy from Chase Atlantic going, with some of their most exciting, upbeat songs. During this portion of the show, she asked the audience if anyone here has seen them live before. There was a resounding, screaming yes, with the majority of hands within the crowd immediately shooting up as high as they could go. She continued, clearly pleased by this reaction, explaining that they love coming back to Phoenix, and that their first time here was at The Nile (Nile Theater) over in Mesa, AZ back in 2008, where they performed with Copeland. They’ve been back many times, including to Warped Tour, and she stated, “Year after year, we keep coming back stronger.” For fans who missed out on this tour, I think it is safe to assume that Lights will surely be back soon.

As the mood seemed to chill out a bit, Poxleitner began a new discussion: “I wrote this song when I was going through a shitty time. Who’s been through a shitty time?” The oddly enthusiastic screams from the crowd were certainly clear answer enough; “We’ve all been through shitty times. Do you know what helps get us through it? Friendship, a little bit of wine, and music.” The crowd loved this strategy, and prior to performing “Face Up,” Poxleitner gave them further inspiration: “Your weaknesses become your strengths.” This phrase would certainly make a great tattoo.

“Your weaknesses become your strengths” – Lights

We Were Here Tour – Issue Two

After “Face Up,” Lights retreated off stage for a brief respite. During this time, Poxleitner displayed some of her artwork on the huge screen on stage. Since she is an artist and illustrator, it only made sense — we got to see some of her characters and settings from her Skin & Earth comic series, synonymous with Lights’ new album of the same name, which currently has 6 issues out for purchase. The images and scenes shown were quite similar to the trailer for Skin & Earth, which can be viewed here: https://youtu.be/FnbL7ZE4hmo

During this phase of the performance, Lights returned to the stage with a more somber attitude. The setup had changed during this short intermission as well — suddenly, there was a piano with lots of candles on top, helping to relax the mood even further. It was time for some calm, more acoustic songs. Poxleitner was back on stage in a new outfit, sporting an acoustic guitar. It was a pleasant change of pace, and it certainly kept the vibes fresh for the evening. It also made the grand finale that much more powerful.

We Were Here Tour – Issue Three

After another quick break and some more stunning illustrations on the big screen, Lights was back on stage, and Poxleitner was sporting a third and final outfit. They brought back the high energy with a vengeance this time around, and Poxleitner joined the band with her own electric guitar. This guitar, she explained, represented her second character in her comic books, and it sported the beautiful Skin & Earth logo seen on stage, on the cover of her books, and all over her website and social media accounts — not to mention she also has it tattooed on her arm. She transitioned into her song “Running with the Boys” after this interesting discussion.

A highlight from this phase of the show was the video clips of Sailor Moon’s transformation and Street Fighter’s Chun Li pronouncing, “I am the strongest woman in the world!” playing in the background, which perfectly complemented the power behind Lights’ performance. Towards the end of this third act, Poxleitner brought up her song “We Were Here,” asking everyone, “When the song starts, do you hear waves or a storm?” The majority seemed to scream, “WAVES!” Poxleitner replied with, “Fuck. I always hear a storm.” She continued to discuss the music video for “We Were Here,” saying that she doesn’t recommend burning a bus, but that it was definitely a lot of fun: “Full disclosure — a pyrotech got to do it. But I got to throw the lighter.”

Once more unto the breach, Lights came back on stage for a quick encore. They weren’t off stage long, likely because the crowd’s chants, screams, and claps were so demanding. Poxleitner picked the mic back up and asked, “Do you guys wanna hear another song?” Everyone, of course, responded with a loud “YES!” She replied, “Alright, so be it, but you guys gotta dance, and you gotta sing,” and the crowd certainly complied. To reward fans, Poxleitner jumped down into the crowd for a bit to give most people up front the best high-fives ever before jumping back on stage for a special surprise for Poxleitner’s sister.

Poxleitner pulled out her phone near the very end of the show and told everyone that it was her sister’s birthday. She wanted to get a video of herself singing “Happy Birthday” with everyone in the audience, so the lights lit the house up, and everyone sang along while she recorded. “I’ve never done one of these before!” she exclaimed after. Her sister certainly got the best little gift from that moment.

Overall, the Phoenix stop of Lights’ We Were Here Tour was an exhilarating experience for everyone, and it was clear the entire band had just as great of a time as the crowd. In fact, Poxleitner may have had the most fun of all — she truly seems to love what she does, and this shines through in her incredible displays of creativity. From the life-sized cardboard cutouts of her comic book character illustrations out in the lobby to the strange vegan pizza box introduction to some synthy song intro tunes, her contagious enthusiasm spread throughout Marquee Theatre and well beyond. This went well with her aura of power her music, and she herself exudes, in addition to her uplifting spirit. She is an inspiration in many ways — a true Renaissance Woman.

Prior to heading out for the evening, Poxleitner explained that Lights is part of Plus 1, a movement and organization that ensures $1 from every ticket sold for participating shows and artists goes to causes they believe in. Lights decided on GRID Alternatives, an organization that helps to bring solar power to places across the states. Poxleitner closed by stating we all need to “protect this little planet that we have… it’s all we got.” They left the stage to resounding cheers of joy, leaving everyone to their evenings with a little positive thinking and a lot of great memories.