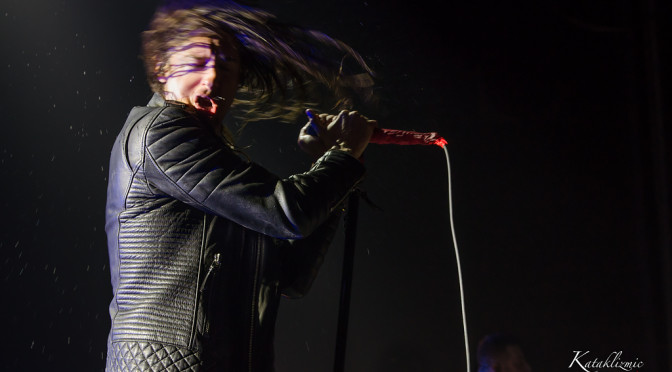 PHOENIX — As I finished my coffee outside Comerica Theater, I watched the ever expanding line of eager concert goers and couldn’t help but marvel at how much the demographic for Underoath and Bring Me The Horizon had changed over the years. Bands who once suffered mile after mile in cramped vans to play to maybe 200 people on a good night were now riding in full size tour buses and playing 5,000 capacity venues decked out in state of the art stage production. Rooms full of angsty scene kids were now joined by radio ticket winners and suburban families all venturing into downtown Phoenix for a Friday night of metalcore’s biggest contemporary acts.

As I made my way down to the venue floor, Beartooth was two or three songs into their opening set and were doing an admirable job of getting the crowd moving and engaged while many were still trickling down to their seats or waiting in the (literally) two story tall merch line. Despite having played multiple sold-out shows at The Nile, sets at KUPD’s Ufest, and enjoying regular radio airplay, the crowd was largely silent when asked “Who here has seen Beartooth before!?”. However, by the time their explosive set wound down to a close, there was no doubt that Beartooth had won over the majority of the crowd and left the stage to raucous applause and an exodus of new fans headed to their march table.

Now, before I get into the Underoath portion of the evening, I must admit that this band has always held a special place in my heart. My first show in 2001 featured Atreyu, Underoath (then touring behind the album The Changing Of The Times), XDeathstarX, God Forbid, and Scars of Tomorrow at the Mason Jar long before it became it became The Rebel Lounge. Throughout high school the memories piled on as I went to virtually every Underoath tour that passed through Arizona with all of my friends who obsessed over every line of They’re Only Chasing Safety

and Define The Great Line. My inner 16-year-old was just as astounded when the band opened up with “Everyone Looks So Good From Here” and “In Regards To Myself”, directly into “It’s Dangerous Business Walking Out Your Front Door”, as when I first heard them blasting through the headphones of my yellow cd player back in 2004 and 2006 respectively.

The rest of the setlist was dominated largely by songs off these two albums, which makes sense given their recent reunion tour featuring both albums performed in full, but featured select songs from Disambiguation

and Lost In The Sound Of Separation

to add a bit of variety to the setlist for the diehard fans. Spencer Chamberlain and Aaron Gillespie sounded even more in sync than on the reunion tour and proved themselves to be absolute powerhouse vocalists who have more than earned their legendary status as truly influential members of the metalcore scene who have made a lasting impact on everyone from The Devil Wears Prada to headliners Bring Me The Horizon.

Disclaimer: The author (yours truly) watched the entirety of Bring Me The Horizon’s set and was absolutely astounded by how tight they sounded as well as the sheer magnitude of their lighting production. However, due to loss of material and a minor concussion from a recent vehicle accident I was unable to recover my review of their set. Look forward to it in a future Party Dispatch and thank you for the patience.