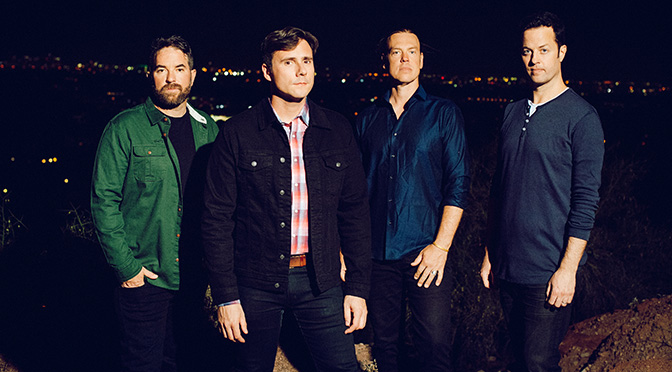 Released on October 18th, Surviving is the tenth studio album by Jimmy Eat World. Available in every imaginable format; it can be streamed, purchased as a download, a CD, vinyl pressing, and if you really wanted to throw it way back (as frontman Jim Adkins loves to do) it can be found as a cassette tape. Surviving is an expertly crafted journey, one that explores the time Adkins spent battling depression and self-doubt. There are ten songs on the record — a theme, perhaps, given the release in the tenth month of the year.

From the first notes of the driving guitars, before the kick of the drums, before the ever-recognizable voice of Adkins kicks in, it is apparent that this will be familiar but new ground. The first lines of the title track “Surviving” appear to confirm this:

Don’t hide your face, what you were before
it doesn’t have to be you anymore

The song “Surviving” could be considered a confrontation of sorts. One could interpret it as the singer confronting his past, and simultaneously the listener could perceive it as a confrontation of their own past. It is relatable in every line, and because of that, powerful.

“Criminal Energy” was my favorite to watch live at the Crescent Ballroom a few weeks ago, and the album version is just as good, if not somewhat muted compared to the live version. That is not to say it is bad in any way; rather, this is a song that is designed to get the blood pumping and the crowd dancing. And it is delightful — Adkins’ voice soaring behind the crashing guitars and drums. Just as quickly as it comes, it fades to a softer, slower song in “Delivery”.

While “Delivery” is paced more slowly than “Criminal Energy”, it is deep. There is a subtle beauty in the lyrics, an essence of yearning for the love of the years gone by. This is the genius of Adkins: the ability to relate to each listener even without meeting them, and to draw a picture in such a way that they don’t always realize the scope of the art.

Adkins continues this in “555”. The art could be lost if you got lost wading through the shock that longtime Jimmy Eat World fans will undoubtedly feel: the shock of a song that sounds more like it came from M83. However, it fits with the message from this song so very well. The expectation of Adkins, and in turn Jimmy Eat World, is that there will be an album that sounds much like what has been done before. There is a danger in that expectation, and it is daring to break it. That is exactly what they do, with synth clapping as the backing and one of the oddest and yet entertaining videos you will ever see.

“One Mil” starts the ramp up back into the heavier songs on the album. The story of wasted chances will resonate with the masses, though I would argue that most of them have never fallen for a camera girl.

Camera girl, you still there?
If I look you’ll disappear
Worse, you might wanna talk
I’m so underprepared

To some it is the classic story of the introvert attempting to find love and upon finding a chance at it, wasting it. To others, it is like a remnant of teenage love, which we would all like to think that we eventually grow out of.

Wish I had mastery of wit, luck and fearless confidence
Then shred majestically to your heart

This story changes in “All The Way (Stay)”, a song that is raw, raw in sound and lyrics, the clang of a guitar and then the echo of a snare drum your only companions at first. It is not comfortable in the first 30 or so seconds, and that discomfort draws you in to listen to lyrics like:

Behind it all, you realize that this is again urging the listener to show who they really are, to allow others, or possibly just one other, to see under the layers where you hide. While the song starts with a crashing drum that may force you to shift uneasily, by the end you will find yourself swaying to the catchy beat and powerful vocals. It is a great lead into a song that has a far more comfortable feel, “Diamond”.

“Diamond” is the song you didn’t know you needed to help you through a really rough time. Hopes, dreams and careers take time, and it’s easy to want to take the easy way out and get a quick payout. After over a quarter of a century playing with Jimmy Eat World, Adkins can say with the utmost confidence in the lyrics:

That’s how a diamond grows, yeah
Give yourself the right chance over time
Don’t believe them
If they try to sell you something quicker, yeah

This theme extends to “Love Never”, where Adkins vocals are on display second only to “555”. This is another life lesson, this time a reminder about love, set over a near frantic beat. Depending on your stage in life, it either serves as a warning for those who still romanticize the ideal love and the idea that cute, fat angels will shoot you with an arrow shortly before you meet the perfect match, or a reminder that love looks a whole lot more like you summoning the strength to not murder your partner for not picking their socks up. At any rate, it is a fantastic, underrated song on this album.

“Recommit” feels like something that all of us have wanted to sing, or yell really, at that one person in our lives who sits on the fence when push comes to shove. To some, the music may feel a little underwhelming in comparison to the rest of the tracks. However, one can appreciate its beachy pop revivalist vibe that flows and ebbs from the verses to the contrasting heavier chorus that barrels in between them.

The album closes out with “Congratulations”, a song that seems so far out of place that it is a bit jarring. Unlike much of the rest of the album, this seems to almost take a political stance, with lyrics such as:

Suspiciously, through editing
The facts are disappearing
With discipline and message
You’ll take awkward possession
Of nothing you really wanted
Welcome, congratulations

The defiance and air of dissonance present throughout the rest of the album melts into the background, as sarcasm seems to run rampant in this unusual and yet enjoyable song. It should also be noted that Davey Havok of AFI and Dreamcar lent his vocals to this song, something subtle you can pick up on once you know to listen for him.

Surviving is an incredibly solid album overall. It harkens back to the energy we all bore witness to in the fantastic journey that was Bleed American (later re-released as Jimmy Eat World). Adkins is a master of self-awareness, weaving life lessons into the verses in much the same way a master weaver would work threads into a rug. While the frontman has been given much praise in this review, the entirety of the band deserves recognition for this album. While it is the norm for the music world to decide to try to build an architectural masterpiece like the Empire State Building, often falling far short of that lofty goal, Adkins and his bandmates decided to build a comfortable mansion in the Midwest overlooking a lake. The band succeeded in doing exactly what they set out to do, giving the world a sometimes odd but overall enjoyable work that will stand the test of time.