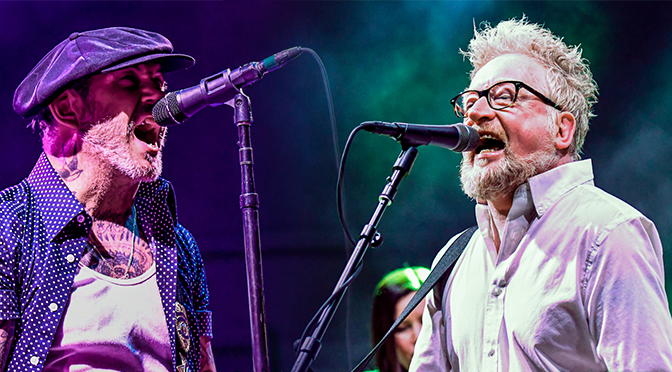 Mesa, AZ — Flogging Molly, closing their “Life is Good” tour, and Social Distortion, about to hit the studio again, put on a spectacular show of endurance and exuberance for an all ages crowd at the Mesa Amphitheatre. Together, they demonstrated that punk’s not dead, but alive and well, with new albums and more tours to come for future fans in attendance that were not even born yet.

The opening bands, Le Butcherettes and The Devil Makes Three, did a fantastic job at getting the crowd pumped and ready for the headliners. With spastic moves and strong vocals, Le Butcherettes surprised and impressed the audience with their style and polished delivery. Then, the bluegrass punk mix brought in by The Devil Makes Three brought in their excellent performance, gaining fans throughout the audience that came in early enough to be rewarded by their unusual, yet fantastic musical talents.

Social Distortion’s Mike Ness and his 40 years of rock and roll experience kept the crowd cheering and fired up during their energized performance. Early into their set, Ness thanked the openers one by one, encouraged the crowd to cheer for them, as he then also shared how the Mesa crowd was so far superior from all the other ones, especially the recent night in Las Vegas. There were nonstop mosh pits during Social Distortion’s performance, staying true to the punk tradition of chaos and high energy.

Halfway through the set, Ness made an announcement that their fans were ecstatic to hear by saying, “I have some great news! Social Distortion is going into the studio in January to record a new album.” Since their last album release was Hard Times and Nursery Rhymes back in 2011, the crowd went crazy. Social Distortion rewarded their fans’ loyalty with a new song called “Over You” from the not-yet-recorded new album.

Ness connected with the audience between every song, telling stories about his musical journey and pouring his all into each song. One of the stories that stood out the most was about an assignment he received while in high school back in September of 1980 where he was told to read about WWII. Ness, with a smile, commented that he spent that time writing a song, and shortly after he dropped out of high school because it was getting in the way of his rock and roll life. That song is called “1945”.

As their set was nearing its end, they were joined by band members from The Devil Makes Three and Flogging Molly for the song “Sometimes I Do”. Social Distortion closed the last stop of their tour with an appropriate song for their 40th anniversary tour; “Story of My Life”.

Flogging Molly hit the stage to end what, for them, has been long 3 years of constant touring.  Their well-deserved break will include a couple of weddings and international trips: Spencer Swain, who plays the mandolin, banjo, guitar, and vocals, is to be married within a week of the show’s end; Nathen Maxwell, who plays bass guitar and vocals, is also getting married within a week after the show; finally, band leader Dave King — their lead vocalist who plays the acoustic guitar, and bodhrán, and his wife Bridget Regan, who provides backing and lead vocals and plays the violin and tin whistle, were going on a trip to Ireland almost immediately after the show at 7:30 the next morning.

King and company rocked the stage and brought a performance to Mesa that was a prime example of fun, energy, and professionalism, demonstrating their 22 years of experience and true dedication to their fans.

A memorable moment arose in the middle of their set as King wanted to give a special shout-out to a fan that flew all the way from Tokyo, Japan, just to see them play here. King greeted this young fan, Kazu, in what seemed to be fluent Japanese, causing an explosion of cheers and clapping from the audience. Flogging Molly played one of their most popular songs, “Tobacco Road”, for this traveling fan.

As Flogging Molly played the energetic, musically and lyrically powerful song “Crush,” King stopped mid-song and said, “On the last day of our tour, after 3 years without emptying our suitcases, let’s have some fun,” and started to sing “We Will Rock You” by Queen with the crowd chanting loudly, then seamlessly went back to the song “Crush”.

King then introduced each one of the 7 Drunken Pirates, as the band members call themselves, one by one and thoroughly thanked the entire crew. He stated that after touring for years, this was the best crew they’ve ever had — “except for this asshole right there,” he jokingly said while pointing towards the backstage area without specifically singling anybody out.

“If I Ever Leave This World Alive” was their last song, powerfully and beautifully performed from the stage to a cheering crowd that didn’t want to see this show end. These fans had been gifted with phenomenal performances from two of the most recognizable punk bands of our time.

As their last song came to an end, the speakers began to play the theme song of Monty Python’s The Life of Brian, a British comedic classic, with their positive and uplifting message: “Always look on the bright side of life.” The stage began to fill back up with the members of Flogging Molly and The Devil Makes Three as they said goodbye to their fans, throwing guitar pics, drumsticks, playlists, and anything else they could find to give away while King waved away his fans, ready for their well-earned break. 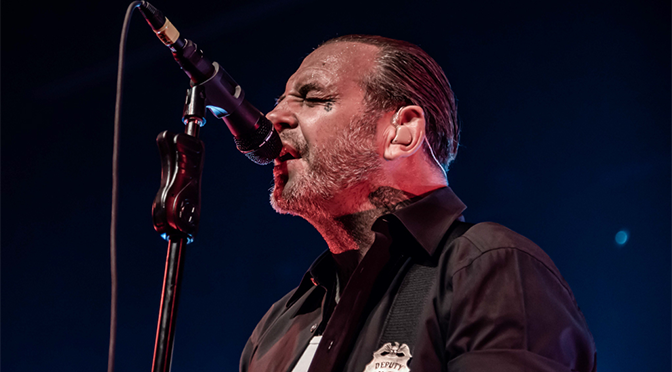