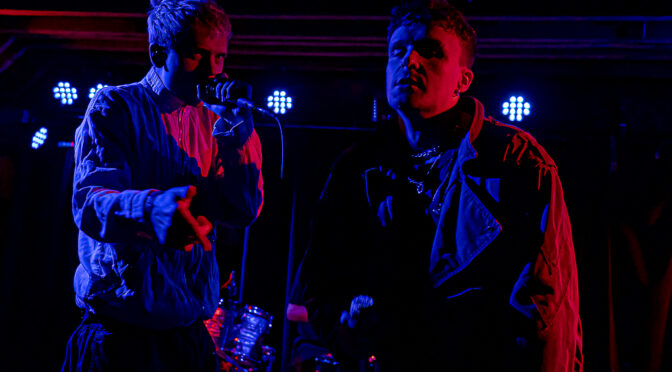 PHOENIX — England’s Sad Night Dynamite has had two full length albums, both dropping in the last two years, but based on the fevered crowd reaction to their Sunday night concert at Valley Bar, with support from The Color 8, you might believe they are a group whose rabid cult-following stretches across decades and multiple albums. Valley Bar was the perfect venue for the show, as its location around the back of a building, and down an old staircase into the basement of the building felt like a secret show that only the coolest people know about. It’s a vibe that Sad Night Dynamite’s set kept going, in a set heavy with crowd interaction

Phoenix’s The Color 8, for those unfamiliar, are a band that defies all expectations their first appearance may give an audience. From the first note of their opener “Galaxy,” one might expect a set of modern-day jazz-funk fusion, like The Meters’ Cabbage Alley album was pulled through a time warp and reimagined for a new generation. That on its own would have been incredible enough, but this is where The Color 8 swerves instead of staying any particular course.

“Is it alright if we switch things up a little bit?” asked guitar player Kal (stage name Kal The Guitar Hero). With that, Kal and bassist Jeremiah Smith laid into a heavy (with emphasis on heavy) metal riff for the song “Whoa,” joined by drummer Wisco 3’s heavy beats. His jazzy tempo from “Galaxy” gave way to a drumming so intense it sounded like he was hitting the drums with cinder blocks instead of sticks. Ashton Vaughn Charles, who was playing the saxophone just a song before, let loose with vocals that felt like a cross between the metal of System of the Down’s Serj Tankian with a splash of the hardcore punk of HR from Bad Brains. It was gloriously intense.

They followed up jazz-funk fusion and metal with the post-reggae island track “Know the Plan.” They invited the audience to join in with each track and be a part of the experience (the band are veterans of First Friday Art Walk, where they were routinely joined by a bevy of different musicians which has lent itself well to their eclectic style). The new song “No Sleep” was a set highlight, featuring some gorgeous harmonies in the shared vocals from Wisco 3 and Jeremiah. Following the metal track “Run It Back,” with more audience participation throughout the song, Kal joked to the audience “We’re a bit bipolar ‘cause we go up and down,” before they launched into the R&B-soul groove of “X.” They closed out their set with “Savage Season.”

Playing their first show in Phoenix, Sad Night Dynamite from Somerset, England immediately proved to have built a strong fanbase in The Valley of the Sun. With the house lights down, the duo of best friends Josh Greacen and Archie Blagden joined their band to the appropriately named track “Intro.” As soon as they launched into “Demon” from this year’s album Volume II, the audience collectively lost their minds. As the two traded off vocals and weaved back and forth around the stage, they were musical puppet masters, moving the crowd this way and that at even the slightest of directions. During the song and throughout the night, Greacen rapped through a megaphone into his microphone, which is never not cool.

For “Black & White,” Greacen played guitar while Blagden went into the crowd (shout out to the member of SND’s crew who stood on stage holding the mic chord high up, so that he could stand in the crowd without the mob of fans around him inadvertently unplugging the mic).  Following “Icy Violence” from their self-titled debut, it was Greacen’s turn to go into the crowd for “Smoke Hole.” As he waded out into the middle, he prompted the crowd with “Alright Phoenix, I want you to break my bones! On my count: 1, 2, 3… 4!” As Blagden and the band launched into the song, the crowd launched into Greacen, seemingly trying to follow through on his request, bouncing him around the circle pit like a pinball. Returning to the stage a little beat up, he jokingly opined “That’s more like a 10, Phoenix… I think I broke some ribs!”

“We’re from this sad little island called England,” Greacen told the crowd after recovering from his circle pit beating. “Do you know what’s good about England?… Sad Night Dynamite,” Blagden responded, with the crowd roaring in approval. Excluding The Beatles, Bowie, and Monty Python, Sad Night Dynamite certainly made a compelling case throughout the night.

The duo changed the mood with the beautiful, atmospheric “Tramp” from Volume II, with Greacen on keyboards. Their 13-song set featured seven of the nine songs from their debut Sad Night Dynamite, and four of the seven songs from their new album. They closed out their set with the chill dance groove of their new song “What Does That Make Me?” and “Krunk”. Sad Night Dynamite traveled approximately 5,186 miles to play their first show in Phoenix, and for this crowd, they truly brought the best thing in England to the Valley Bar.