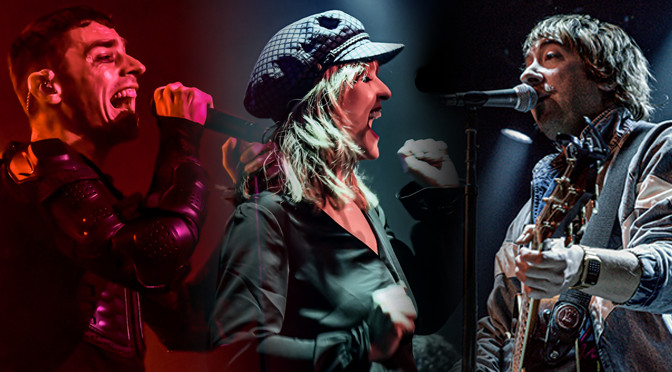 PHOENIX — The weekend after Thanksgiving can be a bit of a challenge when it comes to energy levels. Between possibly overindulging on turkey (or tofurkey) and pie, grinning nervously through family dinners, and running through the aisles of the local electronic store, it is indeed easy to feel completely worn out by the time Sunday night rolls around. However, this year there was a cure for the fatigue: The “3 Dimensional Tour” at The Van Buren. Triple-headlined by the New Politics, The Mowgli’s, and Plain White T’s, it was a night filled with energy and noise, and a perfect antidote to the anecdotes you heard over the helpings of holiday fixings.

Plain White T’s started the night, as a backdrop lit up with the cover of their latest album Parallel Universe, before drummer De’mar Hamilton came out and sat down to set the tone for the rest of the night. Hamilton is an exceptional drummer, and it was truly fun to watch as he laid down a solid beat throughout the set. As the first notes of “Light Up The Room” were played, lead singer Tom Higgenson strode to the microphone with a huge smile on his face and said, “What up Phoenix?! Let’s have some fun!” Higgenson and the rest of the band delivered on that promise, with Mike Retondo deadpanning “Thank you for liking my bass,” as Higgenson asked the audience to applaud Retondo after “Rhythm of Love”. Higgenson interacted and joked with the audience extensively throughout the night, taking time to thank everyone for coming out, and taking notice that “It looks like you’re having a good time! Everyone in the front is smiling!”

Indeed, it is hard not to feel jovial at a Plain White T’s show, as Higgenson keeps smiling throughout the night. As the set started to wind down – entirely too soon, it seemed – Higgenson and the band started to play “Hey There Delilah,” the song they are best known for. The crowd took over singing for him as he backed away from the microphone with a look of joy and gratitude on his face. After “Our Time Now,” he thanked the audience once more and the band left the stage.

After a quick stage change, The Mowgli’s came out while a video played in the background, showing clips from movies meshed with scenes that gave a bit of a psychedelic vibe to the start of the show. In fact, the video continued throughout the set, and at certain points, it displayed the lyrics of the songs. As the first song “Spacin’ Out” started, the shift in energy was very apparent: where the Plain White T’s generate the audience energy through engagement with fans and having fun, while The Mowgli’s generate energy via the audience by turning the stage into a massive dance party.

Vocalist Katie Earl never once stopped moving, even imploring the audience multiple times to dance along. It was a challenge to stay still as they played songs like “Real Good Life,” “I’m Good,” and “San Francisco,” and so the crowd gladly obliged her requests. She also talked about the need to talk through the tough conversations to come to an understanding with another person. The Mowgli’s have quite a bit of fun on stage. At one point during “Talk About It,” — off of their latest EP American Feelings — almost the entire band switched positions, with everyone playing a different instrument. As the last notes of “San Francisco” faded, Hogan and Earl jumped off the stage, high-fived some in the crowd, and shook hands with others. There was a great deal of appreciation from the band toward the audience.

The show ended with a loud, chaotic set from the New Politics. David Boyd pranced onto the stage while rapping the opening lyrics to “Unstoppable,” the first song off of the new album An Invitation to an Alternate Reality. Boyd has a stage presence that is unforgettable, as he prowls and dances like an uncontainable bundle of energy around the stage. At one point during “Yeah Yeah Yeah,” Boyd jumped over the barricade and had the audience gather around and jump together with him.  Those in the crowd were visibly exuberant as they interacted with Boyd and circulated energy amongst each other.

During another song break, he promised everyone that the band would sit in the back after the show and sign everything that was purchased at the merch table. While it became a bit difficult to see the stage at some points due to the amount of smoke, the show was incredibly high energy, even when things didn’t quite go as planned. Guitarist Soren Hansen threw his guitar into the air, and while it didn’t hit the stage, it also apparently didn’t do what he had hoped it would do. He recovered quickly, brushing off the mishap as if nothing had happened.

Part of the magic of a New Politics show is the apparently inexhaustible front man: As the show came closer to the end, Boyd seemed to only become more energetic — At one point, right before “Harlem” started, Boyd started breakdancing, ending up on his head in an impressive pose. As the last notes of “Everywhere I Go (Kings and Queens)” faded, Boyd stood on the drum kit — his back to the audience — and did a backflip, sticking the landing and getting a massive cheer from the astonished fans.It was the perfect end to a night of noise and energy, a night that saw three extremely talented bands take the stage and leave the audience energized, with the food coma of the recent holiday in the rearview mirror. The “3 Dimensional Tour” wraps in Sioux City, IA on December 20th, and is a show that should not be missed. (View Tour Dates)