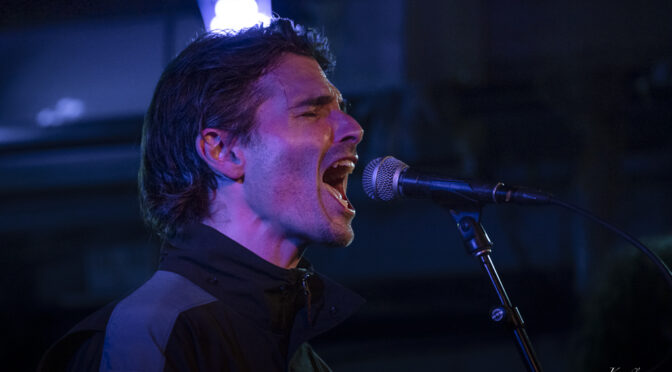 PHOENIX – In a city where history seems to be but a suggestion, where a shrinking number of hundred year old buildings sit in the shadow of cranes that throw tons of steel and glass into the arid desert air, hoping that unsuspecting outsiders fall in love with the 3 days of reasonable weather per year – which seems to work at an alarming rate – one can still find the echoes of the past, if you look hard enough. One of these echoes is a building on the corner of Monroe and Central Ave, where one door will lead to a dizzying amount of Cornish pasties, another will lead to a jewelry shop where you will be greeted by a 102 year old man who walked through those doors 68 years ago and hasn’t left yet, and yet another leads down a flight of stairs.

Down these stairs, you will find the destination for this evening: a music hall and bar that is collectively and aptly named Valley Bar. At the foot of the stairs, you can turn to the left and find the Rose room, named after the first female governor of Arizona, Rose Mofford, or go straight ahead and enter the music hall. Within the music hall, fans of Phantom Planet and AVIV gathered to witness a new piece of history: one of the seven different ZONA night events, put on as part of the brand new ZONA Music Festival. Both bands would make an appearance the next day at the festival, which they both noted, asking the fans to come join them the next day during their sets.

After a quick greeting, AVIV jumped into her set, immediately commanding attention. While she is not very well known in the US, the 16 year old has quite the impressive resume: She opened for Imagine Dragons during their tour through Canada at age 15, has appeared on TV as an actress (including a scene in American Gothic where she fires a crossbow at one of the main characters) and she toured with the Mini Pop Kids – a band well-known in Canada. To say she is an up and coming solo musician appears to be quite the understatement.

AVIV also recently released her first EP: an 8 song record titled Drowning in the Culture. Between her stage presence, vocals, and rather on-the-nose and relatable lyrics, she shows flashes of Billie Eilish while also charting her own course. After the first song, she thanked the crowd, and then told them, “I love it here! The last time I was in Arizona, I was 5 years old, so a little while ago, but I just remember for the next decade I talked about how it was the most extraordinary trip of my life.” She spoke about the beauty of the state – an opinion that perhaps changed after rain fell for almost 24 hours straight on the festival that followed over the weekend, turning it into a muddy pit of pure fun.

Afterward, she played “Girl in Red,” the song that garnered the attention of those in the music world, leading to her signing with a label. A few songs later, she stopped to discuss the songwriting process of “Sleep it Off.” She explained that the song was written in LA about a time in her life when she was “about 8 or 9,” when someone in her community passed away. The song was based on the reply her mother gave her, which was to “sleep it off.” As she began to explain the process, she wavered a bit as a man in the crowd decided to bless the entire room with his loud, one-way conversation with his apparent date, who did not seem overly impressed with his uninterrupted desire to talk. Fortunately, AVIV is quite the pro, and moved on quickly – hopefully this guy’s date followed suit.

AVIV moved around the stage with grace, dancing as she sang, moving to a keyboard, shining flashes of a superstar in the making. It is likely that those in attendance that night will look back and remember the time that they were fortunate enough to see a superstar in such an intimate setting. Before leaving, AVIV mentioned the ZONA festival, stating that she would be “on the stage under the bridge.” This was the Eddy stage (all four stages were named after local musicians) and it appeared to be the driest stage in the festival, while also being the smallest.

ZONA was held less than a mile from Valley Bar, in a park that was only made possible by another piece of Arizona, and, really, national history: On August 10th, 1990, on a brutally hot summer day, the final piece of the I-10 – a 2,500 mile highway stretching from coast to coast – opened up. This piece was the Deck Park Tunnel, a tunnel that isn’t actually a tunnel; it is instead 19 bridges side by side. On top of this not-a-tunnel sits Margaret T. Hance Park, named after the first female mayor of Phoenix. Who better to open this park than the first female governor of Arizona, the aforementioned Rose Mofford? Sadly, Hance passed away just a few short months before the park bearing her name opened, but her name and legacy will live on.

With the music hall now nearly full, Phantom Planet took the stage. Formed in 1994, the band chose their name from a movie that gained second life when Mystery Science Theater 3000 chose to use it in the 9th season of the show. They have taken two hiatuses over the years: The first lasting from 2008 to 2011, and the second was 2013 to 2019.

In between those breaks, they have done just about everything a band could hope to do: put out 5 albums,Alex appeared on two TV shows and a movie, and their song “California” became the theme song for The O.C.

In between all of that, they have had numerous songs show up in movies and TV shows, and have also toured extensively with a rather eclectic mix of bands, including Guns N Roses, Blink-182, and Panic! At the Disco. They have appeared on enormous stages, yet seem to remember the smaller ones more. They even mentioned the time they played in a smaller stage in Arizona, and while they couldn’t agree exactly where it was, however the general consensus was that it was at the Mason Jar, now the Rebel Lounge.

While they have the pedigree of major bands, they also are one of the more relaxed and tight-knit groups out there, and seeing them in a small space was quite the treat. As the evening progressed, the band joked with each other and the fans, at one point noting that a cable came unplugged during their song, which led to the joke, “Why do we always talk after this song? It’s supposed to be the next one!”

The night was rife with technical interruptions and quick thinking and fixes by the band. At one point, lead singer Alex Greenwald broke his guitar string, and a discussion onstage about how to handle it was rather amusing and charming. Lead guitarist Darren Robinson grabbed the guitar from Greenwald, handing Greenwald his guitar, and giving bassist Sam Farrar and drummer Jeff Conrad a break as Greenwald decided to move “California” from the encore to the middle of the set. Greenwald played solo, singing along, while Robinson quickly changed the string, tuned the guitar to the best of his ability, and handed it back to Greenwald upon completion of the song. More lighthearted banter would follow from the band, between each other and the fans who could not get enough.

The set – which lasted about an hour and 15 minutes – saw the band squeeze in an incredible 13 planned songs and two requests from the crowd at the end. At the height of the performance, the frontman entered the crowd and allowed fans to swarm around him as they thrust smartphones forward, recording video inches from his face. As the night drew to a close, he reminded the audience that Phantom Planet would be playing the next day at the ZONA fest on the Ronstadt stage – a day that might’ve had fans of the band singing “One Ray of Sunlight”. While the crowd cheered with great enthusiasm, the band members radiated smiles as they left the stage.

This night was a confluence of history: The forming of a new festival, the gathering in a building where history oozes from the walls themselves, and the memories made during the time the two immensely talented bands were on the stage. While it remains to be seen if 2023 will bring another ZONA Music Festival, the hope and plan is that it will. When it happens, one would be amiss to hesitate in purchasing tickets to see history made once again.