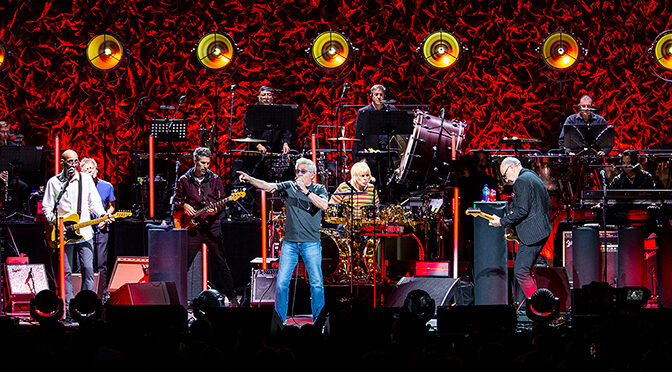 PHOENIX — The Who is a band with a pedigree worthy of selling out stadiums, but this night held the ambiance of a relatively intimate venue at Ak-Chin Pavilion. Opening the show was Mike Campbell and The Dirty Knobs. This same large stage that can look almost empty for a quartet was filled to the brim with a full orchestra and ten times as many musicians. The publicity for this concert seemed to ‘fly under the radar.’ Many long time fans were there to see the legendary singer Roger Daltrey and guitarist Pete Townshend, and it was like ‘tasty icing on the cake’ to get a symphony of sound to elevate the band that coined the phrase rock opera. The setlist took advantage of the cacophony of instruments with selections from Tommy and Quadrophenia.

Mike Campbell and The Dirty Knobs

Campbell may not be a household name to everyone, but he was the right-hand-man to world renown Tom Petty, and as part of the Heartbreakers, Campbell entered the Rock and Roll Hall of Fame in 2002. He will forever be associated with and compared to Petty, and tonight was no exception. He looked the part, wearing a raggedy ‘Mad Hatter’ top hat and a frumpy pin-striped coat, and speaking the same register, timbre, and Florida dialect as Petty.

They were only allotted a short 6-song set and a mere sliver of the stage, but they made the best of it and kicked the night off with two Dirty Knobs original songs from their 2020 release Wreckless Abandon. The rest of the set was like seeing the ultimate tribute band playing Tom Petty “covers.” Except, this was authentic. You’re hard pressed to call them ‘cover’ songs when Campbell co-wrote the biggest crowd pleasers “Refugee” and the closing anthem “Runnin’ Down A Dream”. It’s a safe bet that some of Campbell’s songwriting prowess will fill this venue again next week when Stevie Nicks sings “Stop Draggin’ My Heart Around.”

The stage was set and the multitude of supporting musicians were their places. Dim blue lighting washed over the many instruments that were foreign to most rock concerts and the crowd swelled with anticipation. The spotlights cut through the monochromatic background to reveal the colorful pair of superstars known as Daltrey and Townshend.

Daltrey was wearing an unassuming sage t-shirt and signature blue-tinted glasses. Townshend, ever the showman, was dressed in a black sports jacket with a crimson handkerchief in the pocket and sporting rockstar sunglasses. The night was divided into three acts, and the first act was a celebration of Tommy that included “Overture,” “1921,” “Amazing Journey,” “Sparks,” “We’re Not Gonna Take It,” and of course, “Pinball Wizard.”

It did not take long for Daltrey to shift from wielding a pair of goatskin tambourines to commandeering the microphone and spinning it around like a giant lasso, like he has for decades. He has had some vocal issues to attend to in the past couple of years so the verdict was out as to how he would sound. It was a resounding yes, he was back to full throttle and sounded absolutely incredible. Full range, impeccable pitch, and that unique rasp that makes him a one-of-a-kind.

The sound that the orchestra added was so full and powerful and perfectly mixed. Apparently, there were technical things on stage that were a nuisance, from Daltrey saying that there were a bunch of “mice in his in-ear monitors” to Townshend having monitor issues, and a guitar that completely ambushed the start of one song. Townshend remarked in his humorous snarky way that this venue was “a shit hole, parking lot of a venue” and that they “deserve better.” Daltrey’s reaction was priceless as he looked down and grinned, assumingly amused at the guitarist’s outspoken candidness. They soldiered-through the sound issues and made sure that the fans knew how much they truly appreciated them.

The orchestra remained on stage for “Who Are You,” “Eminence Front,”, and “Ball and Chain” to round out the first act. The conductor, Keith Levenson and a core of four musicians tour with the band, while the remaining members of the up-to-48-piece orchestra are a specially handpicked group of players from each city.

The touring members included Katie Jacoby, the violinist that stole the show for the “Baba O’Reily” solo, Audrey Snyder on cello, Randy Landau on contrabass, and Emily Marshall on symphonic keyboards. The local musicians are the best of the best from the Phoenix Symphony, Arizona Opera, and other chamber groups and recording session players.

We spoke with cellist Melanie Yarger about being selected for the show:

“This was by far one of the most epic experiences of my career,” she said. “Being onstage with an iconic band like The Who is mind blowing in itself, but their presentation with the thick orchestration is just next level. There is a reason why they are the benchmark for rock and roll.”

For the second act, the orchestra left the stage for the core band to perform “You Better You Bet,” “The Seeker,” “Naked Eye,” “Another Tricky Day,” “Won’t Get Fooled Again,” and “Behind Blue Eyes.” The influence of two members of the classic lineup of The Who were ever present throughout the night, but sadly they could only be there in spirit. Drummer Keith Moon passed away in 1978 and bassist John Entwistle passed away in 2002. These are very large shoes to fill, but drummer Zak Starkey (son of Ringo Starr) has toured with them since 1996 and bassist Jon Button since 2017 and, pardon the pun, but these kids are alright.

“Won’t Get Fooled Again” started with an explosion (and no audible count in) and then all eyes were on keyboardist Loren Gold for that groundbreaking sequenced keyboard exposition originally crafted by the mad scientist (Townshend). And, oh yes, Townshend is not too old to show off the windmill guitar attacks on this song. What a treat to see this live! There may only be one Pete Townshend, but there were two Townshends on stage. Pete’s little brother Simon has toured with them since 1996 as the second guitarist and backup vocalist.

Speaking of vocals, so many of The Who’s catalog has wonderful vocal harmonies supporting Daltrey’s melodies and they were able to replicate them live with the help of Billy Nicolls, who was dedicated to vocals, both keyboardists, and obviously both of the Townshend brothers. Pete Townshend’s reported issues of hearing loss might have made one question if he would be able to hear well enough to sing on key, but rest assured that he sounded as good as ever taking lead vocals on “Eminence Front” and “I’m One” from Quadrophenia.

Act three was the ode to Quadrophenia and saw the return of the orchestra to the stage. I wish Entwistle could have been there to hear the horn section blasting out his arrangements on “The Real Me.” It was just a little too loud…exactly as it should be! Townshend composed Quadrophenia, The Who’s third rock opera, just shy of 50 years ago, and these songs are still getting airplay on classic rock stations today and reaching new fans. Songs “5:15” and “The Rock” fed the nostalgic thirst, but it was “Love, Reign O’er Me” that was more like an out-of-body experience… with a full symphony! It was an honor to be there and it is a memory that we collectively carried with us.

With such a deep discography, it is no surprise that quite a few fan favorites had to be left out. This tour decided to leave out the whole era of the early years. It seems almost criminal that they didn’t play “My Generation,” “I Can’t Explain,” “I Can See For Miles,” “Magic Bus,” and a personal favorite: “Squeeze Box.” The newest song that they played was “Ball And Chain” from the 2019 album Who. Luckily, though, they did not leave town before entertaining us with a serving of “Baba O’Riely.”

The windmills were grazing the candy apple red Stratocaster guitar and you could sense the pride Townshend still feels to perform this song after countless shows around the world. Katie Jacoby stole our hearts with her infectious smile during the violin solo (and we will probably never hear this song again without envisioning her playing that part). This ended a magical night of heartfelt musicianship and brilliant songwriting that has been our soundtrack since the British Invasion first filled our airwaves. Townshend ended the evening by introducing all of the touring members and bringing them out front for a wave goodbye.