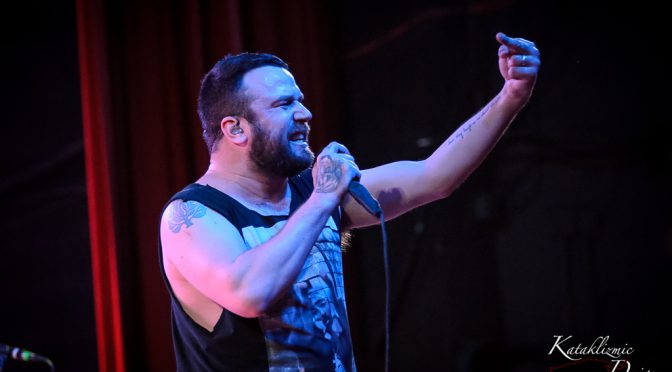 TEMPE, Ariz. — Say Anything came to the Marquee Theatre Friday night and gave fans exactly what they came for. The show opened with sets from mewithoutYou, Teen Suicide and Museum Mouth. Directly preceding the Los Angeles pop-punk headliner, mewithoutYou along with their high-energy barefoot drummer, Rick Mazzotta, was the perfect act to get concert-goers warmed up for what was to come.

Even as the backline crew prepared the stage for the main act, attendees couldn’t contain their screams of anticipation when Say Anything’s backdrop fell open.

When the house lights finally dimmed to herald Say Anything onto the stage, the screams were deafening. From the first song to the last, lead vocalist, Max Bemis, brought raw, hard energy to the stage. The group opened with “Give a Damn” from their new album, “I Don’t Think It Is,” released earlier this year in February. And with hardly a breath between songs, they continued into “Say Anything” from their 2012 album.

Smiling and swinging the mic around by its cord between lyrics, it was evident that Bemis and the band were genuinely having fun on the stage. With a sea of hands raised in the air, Bemis alternately sang and screamed the words to “Woe” before thrusting the mic toward the audience. The crowd sang in unison, every word committed to memory.

It was clear that even as concert-goers were feeding on Bemis’s energy, he was feeding on theirs too, and their enthusiasm was fueling the performance. But what’s perhaps most striking about Say Anything is their sincere love for their fans. At the end of the song, while concert-goers applauded, Bemis applauded them.

Say Anything’s set included other favorites like “Six Six Six” from their 2014 album “Hebrews” and “Death for my Birthday” from their self-titled 2009 album. Bemis then doled out some sage advice to one 14-year-old he spotted in the audience, advising him not to listen to the next song. “If you can relate to it, that’s awesome,” Bemis said. “Otherwise, you don’t want all this. Trust me,” he said before launching into “17 Coked Up Speeding.”

At one point during the night, Bemis confessed that he was glad to see that so many fans had connected with their latest album, despite the band’s two-year hiatus before the album’s surprise release. Many of the lyrics in Say Anything’s songs relate to Bemis’s troubled past and his struggle with bipolar disorder. But the passion he brings to the stage and the emotions that come through as he sings are what make it real. And it was that realness that concert-goers connected with Friday night.

The highlight of the show came when Bemis’s wife, Sherri DuPree-Bemis took the stage for “So Good” from the band’s 2012 album, “Anarchy, My Dear”. Her voice was hauntingly beautiful as it grew in intensity, perfectly complementing Bemis’s own vocals. Their affection for each other is readily apparent when they’re on the stage together, and it was easy to see that fans were engaged, not only with the music, but also with the story behind it.

At the end of the night, Bemis sweetly announced, “one more song for you” before playing “Belt” from the band’s 2004 release, “…Is a Real Boy”. But it wasn’t the last song. After exiting the stage to screams of “encore” and people chanting “one more song,” the band came back out. Bemis, rejoined by his wife, Sherri, sang “Two of a Crime,” a duet from the album of the same title that the two recorded together as Perma in 2013. It was followed by “Varicose Visage”.

But something was missing.

“One more, for real,” Bemis said. “If you know this song, sing along. If you don’t know it, I don’t know why the fuck you’re at this show.” Say Anything closed out the night with their most popular song, “Alive with the Glory of Love”. Before leaving the stage for the last time, Bemis thanked concert-goers for making it a fun show. And in one last display of affection for their fans, drummer Reed Murray took out his phone to snap a shot of the audience before disappearing backstage.

For concert-goers who came for a night of high-energy punk music that rocked hard and didn’t quit, Say Anything didn’t disappoint.