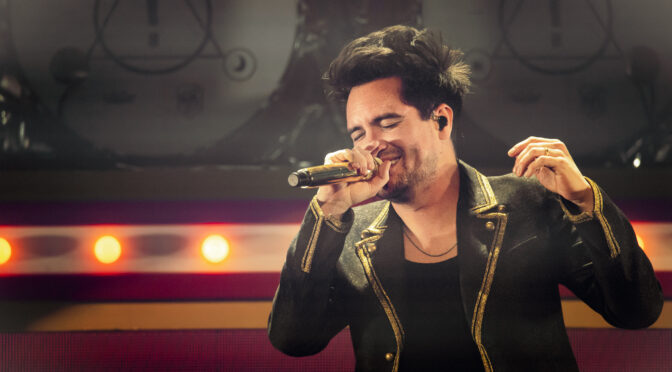 PHOENIX – Panic! at the Disco returned to the Valley of the Sun for the first time in over 4 years; the longest absence from the state since the group was formed. At one point – between Valentine’s Day 2014 and March 29th, 2017, Panic! at the Disco (Panic) visited the Phoenix area a whopping 7 times, so the 4 year absence – in part due to the pandemic – meant that the fans in this area were hungry for the pageantry that comes with a Panic stage show. Opening for Panic was Jake Wesley Rogers, who catapulted into the public’s eye in 2012 when he competed – and was unfortunately eliminated in the quarterfinals – on America’s Got Talent. Following Rogers was MARINA, a Welsh-born singer/songwriter who started on her path to stardom across the pond in 2005.

The three artists visited the valley on the “Viva Las Vengeance” tour, in support of the latest album – of the same name – from Panic! at the Disco. Together, the three bands promised to put on one entertaining show. The stage was a bit different than what most are used to with a square catwalk surrounding a standing room only pit for the lucky few who were able to score those prize tickets. If one were to stand in the middle of that area, it would only be around 15 feet from the stage in all directions, making it an incredible place to view this show.

As his accompanying band started up, Rogers emerged wearing a white, sparkly suit with ruby red high heeled boots. It was a triumphant entry, his hands held high as he spun around before he took a seat at the piano.

Rogers may not be the most recognizable name on this tour, but he was an excellent choice to join Panic! He was an entertainer though and through, projecting some Freddie Mercury vibes when he whipped off his jacket, revealing a tank top. It would be easy to get lost in the majesty of his stage presence, but he is not only great at setting a scene and then chewing it right up, he is also a staggeringly talented vocalist.

At one point, he performed a cover of My Chemical Romance’s “Welcome to the Black Parade,” to the delight of the crowd. The mix of his vocal talents and his ability to impressively emulate Gerald Way shows that Rogers is the consummate entertainer, and we will likely see him quite a bit more on tours – perhaps even headlining on the scale of Panic – in the future.

Mid-set, he introduced himself and explained he was from Missouri, “You know…the Bible Belt,” and, chuckling, he showed off the soon to be infamous high heeled red boots – perhaps a nod to Brendon Urie’s time in the Broadway musical “Kinky Boots” –  and stated “I like to think I was the rhinestone on the belt buckle.”

The 30-minute set was capped by “Pluto,” the title track of the album he released last year. As his performance was coming to an end, he announced he was putting his phone number up on the screen, and he would select one person to upgrade their seats. This was his way of giving back, as he had told the story of how, growing up, his mother took him to concerts, but they ended up sitting in the nosebleeds. This was his way of taking someone who was in the same type of situation, giving them a night they wouldn’t soon forget.

As the stage change occurred, a banner with “MARINA” was raised. This act alone caused a cheer to rise from the crowd, and it became clear that there is a huge portion of Panic fans who are also MARINA fans. It’s easy to see why, as they both share the flair for the dramatics.

While there are no pyrotechnics that back up vocalist Marina Diamandis, she truly does not need them. She came out wearing a pink dress, slinking onto and owning the stage, and she launched into “Ancient Dreams in a Modern Land.” Standing on a white platform, Diamandis commanded the attention of the audience, keeping them in awe for the entire performance.

She greeted the crowd before “Man’s World,” saying “Phoenix! How are you feeling tonight? I’m so, so happy to be here, thank you for the warm welcome! I wasn’t expecting it.” Diamandis was extremely grateful for the love that the crowd showed her, thanking them between many of the songs, and also seemed a bit surprised at how well the crowd knew her music. Her mix of confidence and humbleness endeared herself to the crowd even more. It was hard to walk away from her set and feel anything but awe for her performance.

When she started out, she had stated she was influenced by Britney Spears and The Distillers’ singer Brody Dalle. She is now an influence herself, and there are undoubtedly many musicians and vocalists who are inspired by her for good reason: Her voice is stunning, she has the stage presence of a superstar (making the most of a minimalist background), and her lyrics are sharp and pointed, even with the upbeat sounding music. In short, it is no wonder that so many knew her music, and no wonder that she was given such a warm welcome from the crowd. Over the course of a 12-song set, she moved between the platform, her piano, and walked the stage with a fierce confidence. She closed her portion of the show with more gratitude to the audience, followed by “Bubblegum Bitch,” which drew the biggest cheers of her set.

After MARINA’s set ended, the temperature in the arena started to plummet. Signs on the pillars on the way in warned that there would be flashing lights, smoke, and pyro effects. When you see a sign about pyro in an arena, and you feel the temperature dropping, it is a good sign that you’re about to get a lot warmer, and not just because you’re going to be dancing yourself into a frenzy. Panic! at the Disco is well known for their stage shows, which are always over-the-top and some of the most fun you can possibly have at a concert.

There is also a build-up of anticipation before the show starts: on the sides of the stage, a clock counts down from 10 minutes, giving fans plenty of warning so they could return to their seats. During this countdown, various songs were playing, and as the last couple of minutes ticked by, the newly rediscovered masterpiece of a song “Running Up That Hill (A Deal with God)” by Kate Bush. As the song ended, the lights cut out, and a simulated thunderstorm started.

Panic! At the Disco

Lights flashed, thunder rumbled, smoke poured from the stage and the cheers started. And then seemingly out of nowhere – due to some fantastic misdirection – Urie stood on the outer edge of the stage with a huge grin and a microphone. As he began to sing “Say Amen (Saturday Night),” he also began to slowly make his way around the loop up to his ultimate destination of the main portion of the stage.

For those who have not attended a Panic show, Urie is a showman to the core – a flashy entertainer who will make sure you’re having the time of your life. The first 6 songs of the set were quite familiar to the fans, ranging from “This is Gospel” to “Emperor’s New Clothes,” the song when the pyro really kicked in. As the skulls on the screen behind Urie and the band laughed, flames erupted across the stage. 30-foot flames produce massive amounts of heat, and with multiple fireballs erupting, it became very clear why the arena attempted to turn the massive room into an icebox.

Once the first portion of the show ended, Panic proceeded to play the entire new album, starting with the title track “Viva Las Vengeance.” Not all of the songs were overly impressive, but the presentation is what mattered most here. Joining Urie on stage was a guitarist, bassist, a small brass section, and stringed instruments. The three stringed instruments – two violins and a cello – were thrust into the spotlight during the openings for most of the new songs. The brass section would get their chance to shine during “Death Of A Bachelor” later in the show, as everyone – including the drummer – left the stage beyond the saxophonist, trumpeter, and the trombonist, who all joined Urie at the outer edge of the stage.

The tracks off of Viva Las Vengeance range from the tragic in “Don’t Let The Light Go Out”, to the bouncy “Sad Clown” – which sounds as if it was pulled straight from a musical. There is even a song that might make some imagine that Will Ferrell and Christopher Walken are about to burst onto the stage: the cowbell content of “Sugar Soaker” is excessive perfection – which is perhaps a paradox – but unlike “Jumbo Shrimp,” this makes sense once one sees a live performance of the song. Many bands don’t showcase their entire album at once, so it was a bit unusual to have 12 songs sandwiched between classics that all Panic fans know and love.

The new album also shows off the incredible, unearthly vocal range that Urie has. The 4-octave range is used throughout the previous albums, but to witness it in person is breathtaking. There seems to be very little that Urie cannot do, and he appears to relish each moment up on stage. The fans relished it as well, and the Shakespearean saying “parting is such sweet sorrow” would apply here. Fans in Phoenix will undoubtedly eagerly await the next show, which hopefully will not require another 4-year wait for Urie and his crew to give us a dazzling spectacle of lights, sounds, and imagination.